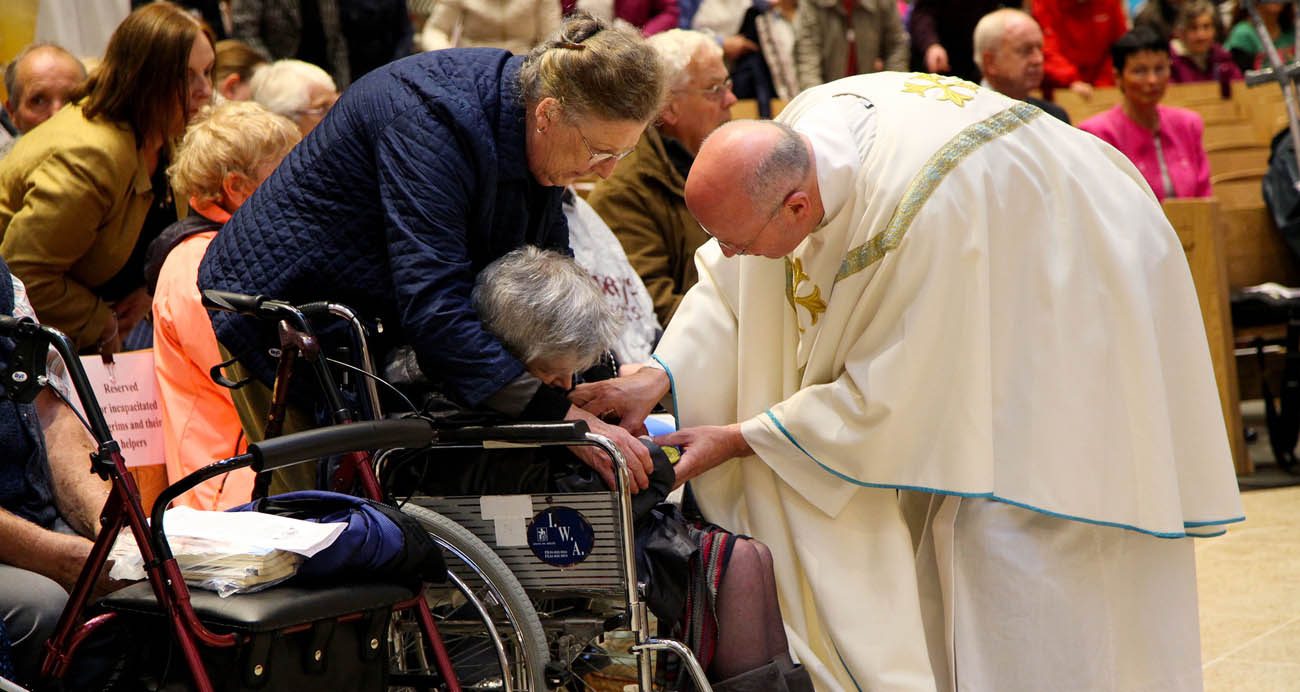 A priest blesses an elderly woman in 2017 at the Knock Shrine in Ireland. Pope Francis is scheduled to visit the shrine during his Aug. 25-26 trip to Ireland for World Meeting of Families in Dublin. (CNS photo/courtesy John McElroy)

UPDATED – VATICAN CITY (CNS) — Pope Francis’ brief visit to Ireland for the World Meeting of Families Aug. 25-26 will include a quick trip to the Marian shrine at Knock and a special meeting with homeless families.

He also will meet representatives of survivors of clerical abuse and residential abuse — such as Magdalen laundries and mother and baby homes — during the course of his two days in Ireland.

In Maynooth, Ireland, June 11, the day the pope’s itinerary was published, Archbishop Michael Neary of Tuam, custodian of the Shrine of Our Lady of Knock, told reporters, “One of the most beautiful sights at Knock is to see families, sometimes the three generations, praying and enjoying the peace and tranquility of the shrine.”

The apparition at Knock in 1879, he said, “was family apparition.” Fifteen people in the village said they saw the apparition of Mary, Joseph, a lamb representing Jesus, and St. John the Evangelist, to whom Jesus entrusted Mary as his mother.

Archbishop Eamon Martin of Armagh, Northern Ireland, told media he expected many Northern Ireland Catholics to travel to Knock for the occasion now that a papal visit north of the border had been ruled out.

He added that they were still “delighted that he is coming to this island, and we’ll celebrate that and make the most of it.”

Keeping his custom of setting aside time for the poor and others in particular need, Pope Francis also will visit a day center for homeless families in Dublin.

The World Meeting of Families will conclude Aug. 26 with an open-air Mass in Dublin’s Phoenix Park. This was the venue for St. John Paul’s outdoor Mass in the Irish capital in 1979, where 1.25 million people attended.

However, Archbishop Diarmuid Martin, president of the Ninth World Meeting of Families, stressed that the crowd would be capped at 600,000 to comply with health and safety regulations.

The following is the pope’s schedule as released by the Vatican. The times listed are local, with Eastern Daylight time in parentheses:

— 12:10 p.m. (7:10 a.m.) Meeting with authorities, civil society leaders and members of the diplomatic corps in Dublin Castle. Speech by pope.

— (No time specified) Meeting with bishops in the convent of the Dominican Sisters. Speech by pope.

Contributing to this story was Sarah Mac Donald in Maynooth, Ireland.