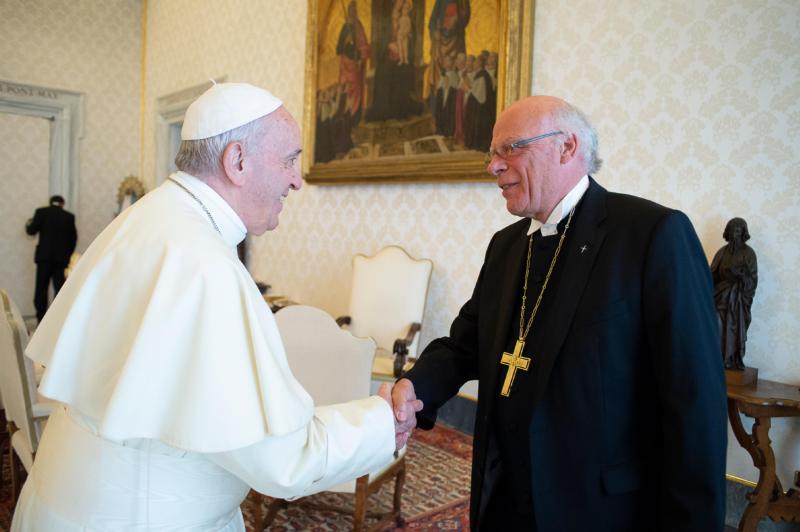 WASHINGTON (CNS) — Days before Pope Francis’ visit to the World Council of Churches in Geneva, a top German Lutheran bishop praised the Catholic leader for his dedication to ecumenism.

In an email interview with Catholic News Service, Bishop Gerhard Ulrich, leading bishop of the United Evangelical Lutheran Church of Germany, discussed the current state of Catholic-Protestant relations in Germany, the interfaith-marriage Communion controversy and his recent visit with Pope Francis.

The bishop said the relationship between Protestants and Catholics worldwide has reached an unprecedentedly positive level since Pope Francis jointly led a commemoration ceremony with the general secretary of the Lutheran World Federation for the Reformation Anniversary in Lund, Sweden, in 2016. Bishop Ulrich said the service, a result of 50 years of trusting cooperation between the Vatican and the Lutheran World Federation, was “a historic milestone for Lutheran-Catholic ecumenism.”

“Never before were the Reformation and its consequences, from the global level to local communities, commemorated in sisterly cooperation by our churches,” he said.

The bishop said cooperation between the Vatican and the Lutheran World Federation on diaconal initiatives has increased as a result of the service.

“The previous years have taught that the churches on either side owe each other detailed theological debates,” he said. “But first they owe the world the service of love for the poor and oppressed — and this, wherever possible, together.”

Bishop Ulrich, who met Pope Francis at the Vatican June 4 as part of the German National Committee of the Lutheran World Federation, said discussions focused on Lutheran-Catholic relations on a global scale and also their effect on the Lutheran Church in Germany. The delegation discussed topics that still remain controversial, including ministry, the Eucharist, and the church.

During the talks, Pope Francis said advances must be made “together with patience,” which Bishop Ulrich viewed as self-evident for continuing theological dialogue and as special words of encouragement.

“The words of Pope Francis were an important reinforcement and affirmation,” said Bishop Ulrich. “He underlined the goal of completely overcoming differences and the demand to ‘achieve an ever more concrete and visible unity among each another.'”

“What Pope Francis told us was certainly no stop signal, but an encouragement of ecumenism and a tailwind for the talks between the Lutheran World Federation and the Vatican.”

Bishop Ulrich said Communion for interfaith couples remains relevant for believers and should be addressed, despite remaining the differences between Protestant and Catholic denominations.

“We have not yet been able to solve all theological questions regarding the church and the understanding of administration. Therefore, a full sharing of community according to Catholic understanding is still not possible,” said the Lutheran leader. “However, it pains married couples of different confessions that they share their entire lives together but cannot experience together God’s saving presence in the eucharistic meal.”

He said the issue, raised during the commemoration ceremony in Lund, tends to be addressed in individual cases and is not regulated by canon law. He said he believed a uniform approach would be helpful in addressing couples’ needs.

“The attempt of the German Catholics — totally supported by the Protestant side — to achieve a unified regulation on this question in all German dioceses has failed,” he said. “This is something that we Lutherans, with grief but also with cool heads, must realize. But we continue to hope for concrete pastoral alleviations locally, insofar as we have not yet completely solved the dogmatic questions.”

The bishop told CNS he did not believe the increasingly harmonious relationship between Protestants and Catholics in Germany would be damaged by the debate over sharing Communion. Although the matter of achieving a solution has become more difficult, he said it “will in no case harm our relationships here in Germany. Our sisterly bond is much too strong for that.”

He expressed confidence in Pope Francis and said he hoped talks on the issue of Communion for interfaith couples would continue.

“These days, the visit of Pope Francis with the German Lutheran community in Rome in fall 2015 constantly returns to my mind,” said Bishop Ulrich.

“In answer to the question of a woman regarding receiving Communion with her Catholic husband, the pope answered, ‘Assure yourselves of the teaching, examine your hearts — and then go forward!’ This statement assures me that the subject … has not yet been set aside.”

PREVIOUS: Relic of early pope, found by waste company, given to London cathedral