Relic of early pope, found by waste company, given to London cathedral

LONDON (CNS) — A relic of bones of an early pope was given to the Catholic Church after it was stolen from a car and recovered by a waste disposal company.

Three fragments of a bone said to belong to St. Clement I, a first-century martyr who was ordained a bishop by St. Peter the Apostle, were presented to London’s Westminster Cathedral June 19 by James Rubin, owner of Enviro Waste.

Rubin said he discovered the relic in his warehouse during an office cleanup earlier this year.

“We had a range of furniture and electrical waste, and I happened to see it (the relic) on the side of someone’s desk. I thought it was a bit strange, that it didn’t really belong in the hands of a waste company, but I didn’t know what it was at the time,” he told a news conference in the cathedral.

He discovered through Google that “Ex Oss” meant “ex ossibus,” Latin for “from the bones of,” Rubin said, noting that he then knew he had made an interesting discovery and made it public, in the hope that he might obtain more information.

Almost 200 people, including Catholic Church representatives, contacted him asking to be given the relic, and he chose to present it to the cathedral, he said.

The relic’s original owner, who has decided to remain anonymous, told Rubin it was among items stolen from a car and agreed that it should be given to the church.

Archbishop George Stack of Cardiff, Wales, who accepted the relic on behalf of the cathedral, told the news conference that St. Clement, the third successor of St. Peter and an “apostolic father,” was a “very important figure in the life of the early church” and the author of a letter to the church in Corinth that still exists.

The saint was a persuasive preacher who was exiled by the Roman Emperor Trajan to Crimea, where he was martyred by being tied to an anchor and drowned. Since then, he has been venerated as the patron of mariners, the archbishop said.

The relics of St. Clement were taken to Rome in the ninth century by Sts. Cyril and Methodius and were entombed in the Basilica of St. Clemente on the Coelian, he said.

The relic represents an “exciting discovery” and a “remarkable find,” said Tessa Murdoch of London’s Victoria and Albert Museum.

The reliquary dates from the 17th century, and the seal on the reverse bears the coat of arms of an otherwise unidentified cardinal who was probably “responsible for authorizing the production of smaller relics from a principal bone of the saint” and distributing them, she told the news conference.

“We don’t know where this was first received, but one guess was the basilica is the home of the Irish province of the Dominicans, so there may be an Irish connection,” Murdoch said.

Sophie Andreae, vice chair of the patrimony committee of the Bishops’ Conference of England and Wales, said the relic would go on public display at Westminster Cathedral and may be loaned to exhibitions in other places.

“It is early days, but we are very keen that it should be something that should be seen by the public, but its main home will be here,” she said. 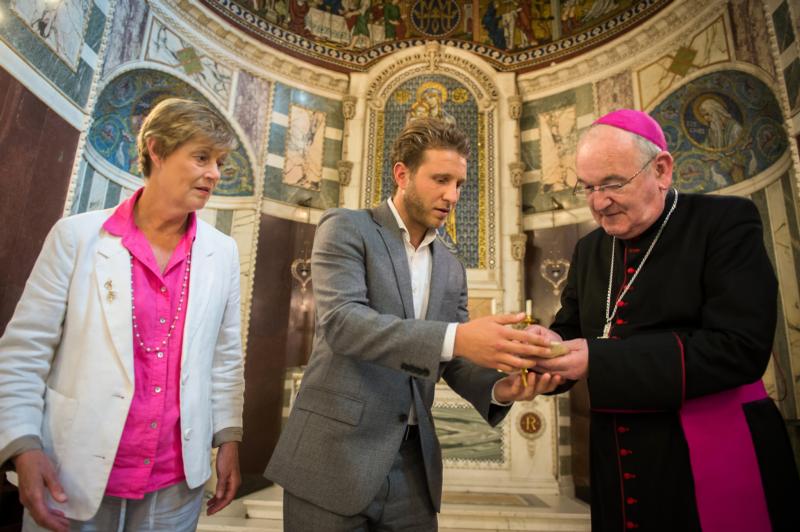 PREVIOUS: Out of this world: Vatican’s care for creation includes final frontier