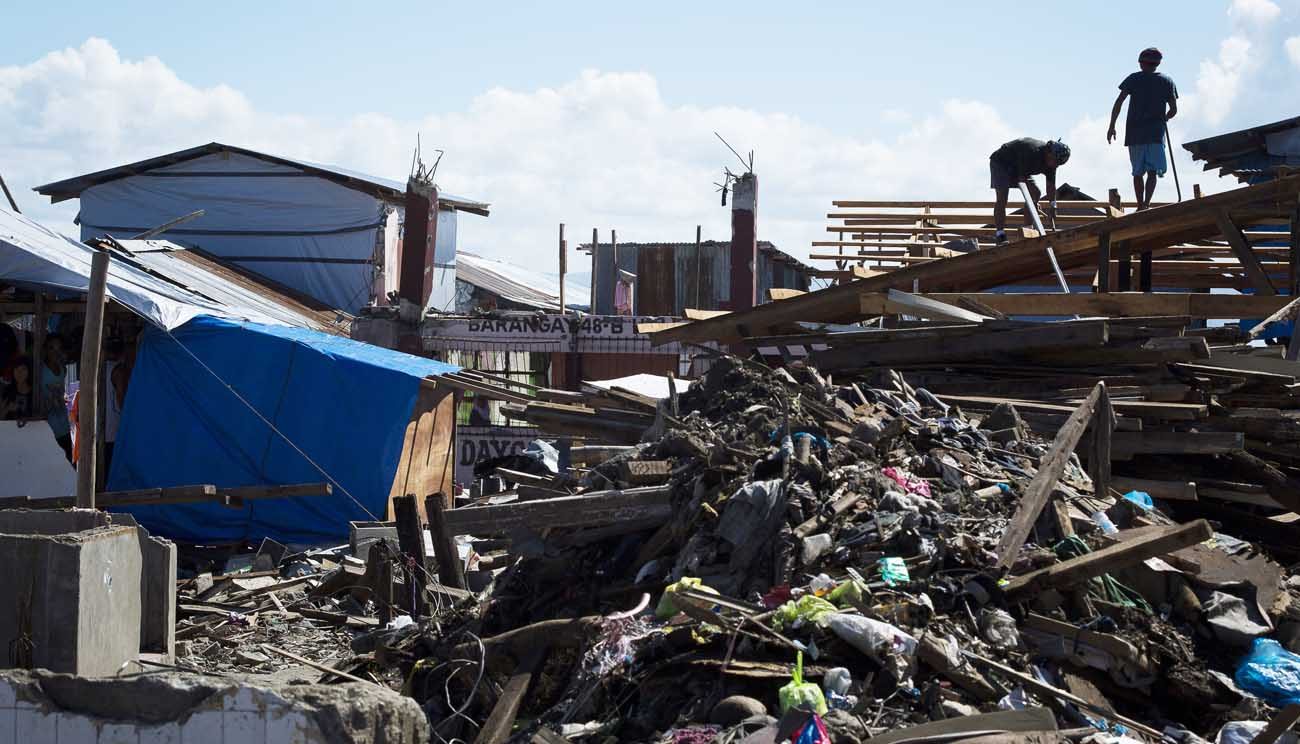 In this 2014 file photo, residents of Tacloban, Philippines, rummage through debris left by Typhoon Haiyan. To date, the social action arm of the Catholic Church has been able to help about 1.8 million people affected by the destruction brought by the storm that struck the central Philippines in 2013. (CNS photo/Tyler Orsburn)

TACLOBAN, Philippines (CNS) — Through early June, the social action arm of the Catholic Church has been able to help about 1.8 million people affected by the Typhoon Haiyan that struck the central Philippines in 2013.

The church’s recovery and rehabilitation program has become one of its largest and far-reaching natural disaster responses in the country, amounting to about $50 million, ucanews.com reported.

The response from the church has brought comparisons to government-sponsored rehabilitation programs, which has been beset with corruption and charges of substandard housing construction.

Of 205,128 housing units that were promised by the government, only 67,754 units, or 33 percent, have been completed and only 34.3 percent of those were occupied, a check of records revealed.

Meanwhile, Caritas Philippines reported that it repaired 593 housing units and constructed 768 transitional units, 1,923 progressive core-shelter units, and 1,167 permanent shelter units while providing a host of other services to storm survivors.

The progressive core shelters have a lifespan of 10 years while “permanent” houses can last a minimum of 20 years, according to Caritas.

While the number of government-built housing units may be significantly more, residents have described them as poorly built and inadequate for family needs.

Jing Rey Henderson, the church group’s coordinator, said that from the very start, church officials constantly tell people that the program belongs to them and is “not one of the Catholic Church.”

She said people need to have a sense of ownership and entitlement and to bounce back and become more “empowered, resilient, and sustainable.”

Henderson said Caritas works within the framework of community-managed disaster risk reduction and the principles and strategies of community organizing.

“Through these, (we) ensure that even without the presence of (church groups), and even beyond the funding period, communities can sustain programs,” she said.

Henderson claimed that true to their vision, 166 communities under the church’s three-year intervention program have become sustainable.

“The program is of and for communities,” she said. “The recovery and rehabilitation program have flourished because the communities have a high sense of full ownership.”

All the targets for the three-year program in nine dioceses covering 51 towns and 166 villages in the central Philippines were accomplished.

When asked what has made the church projects more successful than government initiatives, Father Virgilio Canete of the Archdiocese of Palo pointed to the absence of “red tape.”

The priest said government “procedures on procurement demand a lot of signatories.”

“The situation post-Haiyan was such that government agencies involved got tied up,” said Father Canete, adding that the church had the advantage of more volunteers.

Rina Reyes, leader of the Rights Network, a land-rights group, said government rehabilitation efforts have not been successful “because the affected population was not consulted.”

She pointed to “uncoordinated efforts of government agencies … that do not talk to each other to resolve roadblocks, hindering rehabilitation needs.”

“There is lack of a concrete rehabilitation plan that suit the needs of the affected,” she said.

Wendell Avisado, an adviser to President Rodrigo Duterte on rehabilitation efforts, blames the “vicious cycle” of the government’s bureaucratic system.

While the government continues to find ways to address the problems, people complain that they are living in shelters that are comparable to “pigpens.”

Raul Malibago, a 50-year-old Haiyan survivor, said his family of 10 was provided with a government housing unit that measures about 3,100 square feet.

“We are not even allowed to build a second floor,” he said. “When we sleep, we stick together. It’s small, hot, overcrowded, and there is no space for privacy,” Malibago said.

He said the house is made of “all sand and no steel bars,” making it dangerous for those inside. “I’m afraid it will collapse if there’s an earthquake,” he said.

“These are nothing but pens only fit for pigs,” he said, adding that the shelters have no stable water or electricity supply.

PREVIOUS: Cardinal-designate focuses on the pastoral at doctrinal congregation

NEXT: Pope prays for victims of Guatemala volcano disaster