Cardinal-designate focuses on the pastoral at doctrinal congregation 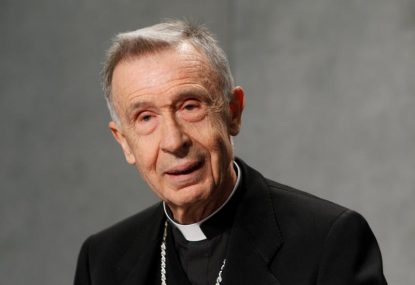 Archbishop Luis Ladaria, prefect of the Congregation for the Doctrine of the Faith (CNS photo/Paul Haring)

VATICAN CITY (CNS) — When he was named secretary of the Vatican’s doctrinal congregation, Cardinal-designate Luis F. Ladaria Ferrer marveled at being unexpectedly thrust into the limelight.

“That was very surprising. I would never have thought of ending up here. And I’m not the only one, seeing that my name was never mentioned in the newspapers,” he said in August 2008 in an interview with the Italian Catholic magazine “30 Giorni.”

Since then, the Jesuit prelate has had his share of surprises, which culminated in his appointment as prefect of the Congregation for the Doctrine of the Faith and now as a cardinal.

Born in Manacor, Mallorca, April 19, 1944, Cardinal-designate Ladaria earned a law degree at the University of Madrid. After obtaining his degree, however, he “realized that was not what I wanted.”

“I wanted to become a priest, and I liked the Society of Jesus, which I knew. And so, it was a path open before me that I set out on almost naturally,” he told “30 Giorni.”

He entered the Jesuits in 1966 and, after studying theology and philosophy in Spain and Germany, he was ordained to the priesthood July 29, 1973.

As someone who “liked studying,” the Spanish prelate went on to earn a doctorate in theology from the Pontifical Gregorian University in Rome in 1975 and began teaching dogmatic theology at the Pontifical University Comillas in Madrid. Nine years later, he returned to the Gregorian to teach, and he served as vice rector of the university from 1986 to 1994.

But, Cardinal-designate told “30 Giorni” that his time as vice-rector was “not very important.”

“The Gregorian taught me to live in an international environment with students from over 100 countries, of different languages, races and cultures. All united by the love of study, but above all, of the Lord and his church. In a real university, students not only learn from professors, but also the reverse occurs. And I learned a lot from my students,” he said.

Cardinal-designate Ladaria also said his time in Rome as a professor shaped his view on handling church issues that often can be used to advance extremist agendas, both on the left and the right.

“I must say that I don’t like extremisms; either progressive or traditionalist ones,” he said. “I believe that there is a middle path, which is taken by most professors of theology in Rome and in the church in general, which I think is the correct path to take.”

Pope Francis named Cardinal-designate Ladaria prefect of the congregation in 2017. As prefect, he is responsible for promoting the correct interpretation of Catholic doctrine and theology; his office also is responsible for conducting investigations of clergy accused of sexually abusing minors.

Despite his responsibility as the church’s doctrinal chief, Cardinal-designate Ladaria said that for him, accepting the role was “a simple question of obedience.”

“Pope Francis called me and told me his decision, and I said: ‘Holy Father, if that’s what you have decided, I accept and say no more,'” he said in an interview with Vatican News March 10.

“Of course, it is a responsibility, and I must say that the first few days I did not sleep too well,” he said. “But slowly you get used to the idea and see that it is possible, especially knowing this is what the pope wants. So, it’s better not to think too much about it: the whole thing is done and dusted!”

When asked whether his and Pope Francis’ shared Jesuit formation helps them collaborate more easily, Cardinal-designate Ladaria said that while it does, the fact that both are members of the Society of Jesus “is by chance.”

“The pope is the pope! Whether he’s a Jesuit or not makes no difference to me,” he told Vatican News. So, (being a fellow Jesuit) can help, but it’s by chance; it doesn’t change the substance.”

As head of the Congregation for the Doctrine of Faith, Cardinal-designate Ladaria said his task of defending and preaching the faith is not just a position of theological authority but also clearly has “pastoral dimension.”

“Many times, I heard Pope Benedict XVI — when he was Cardinal Ratzinger and prefect of the congregation — say that ‘we must defend the faith of simple believers, not the faith of theologians,'” he told Vatican News.

“Of course, this does not mean we do not have to make a close study of documents, but we do so with the ‘salus animarum’ (‘salvation of souls’) in mind always,” the cardinal-designate said. “This is always the primary purpose of all our work.”

PREVIOUS: The pope’s man in Rome: Vicar for Rome diocese to become cardinal

NEXT: Typhoon Haiyan victims in Philippines pick up pieces with church help