ATLANTA (CNS) — In the U.S. Army Reserve, Maj. Gen. Thomas Wessels engaged in missions across the Middle East and Southeast Asia from Bahrain to Saudi Arabia.

Now retired after 37 years of military service and a 43-year banking career, he travels from Haiti’s slums to Colombian jungles to lead a new strategic mission: to uplift the hemisphere’s forgotten sick and poor.

As president of Malteser International Americas, he also hopes to bring Catholics on board with the mission.

Wessels carries onward an ancient tradition started by the Order of Malta, a Catholic religious lay and chivalrous order established in 1099 in Jerusalem during the Crusades to defend Christianity and care for the wounded, poor and sick. It now has its headquarters at the foot of Rome’s Spanish Steps.

Building on that humanitarian tradition, its relief agency Malteser International was established in Germany after World War II and began serving the Americas in 2010 following Haiti’s earthquake and cholera outbreak.

Just this year, volunteer leader Wessels has visited the Dominican Republic and Colombia, gone to a general assembly in Budapest and attended a board meeting in Haiti’s Cite Soleil and Tabarre slums outside Port-au-Prince.

A member of Holy Spirit Church in Atlanta, Wessels became a Knight of the Order of Malta in 2008 and president of Malteser International Americas in 2017.

“I’m able to walk my faith by doing things for us that are important as Catholics because it’s providing humanitarian assistance, disaster relief and then eventually sustainable development,” Wessels, 74, told The Georgia Bulletin, newspaper of the Archdiocese of Atlanta. “We’re basically trying to bring dignity to everybody, respect and understanding and love for all the people we help. It doesn’t matter what their religion is, we treat everybody as equals.” 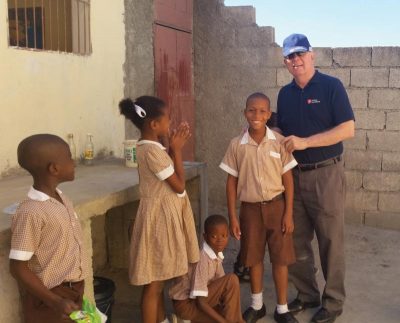 Malteser’s vice president, Ed Delaney, of Boston, was impressed in Haiti by the scope of projects such as planting mangroves on the shoreline to purify the water, prevent erosion, attract shellfish and counter deforestation. And the plant and animal protein food security program provides families with chickens, ducks and pigs and gardens.

“These are long-term, sustainable programs that will really change lives not just today but for long term,” said Delaney, a retired software entrepreneur. “It’s simple concepts like clean water, sanitation, food security, having chickens and pigs. Those things make sense but you have to actually do it. So that’s what is exciting about Malteser.”

“My main mission is to let the Catholic world know and then the rest of society know that we are a worldwide, respected charitable disaster response organization,” said Wessels, adding that it is “in 120 countries around the world diplomatically” and engaged with about 27 countries with its projects.

“About 90 percent of every dollar raised goes to the works of the order,” he said, “so it’s very, very efficient worldwide.”

In June, the nonprofit signed a memorandum of understanding with the U.S. Agency for International Development. It is completing accreditation with the National Association of Voluntary Organizations Active in Disasters, enabling them to partner with the Federal Emergency Management Agency as a first responder in disasters and develop an American volunteer organization.

In Europe, “they have a huge volunteer force of thousands and thousands of people who’d like to support Malta and Malteser International. And I’d love to see that happen in the U.S.,” he said.

Wessels oversaw relocation in 2017 of the Malteser International Americas headquarters from Miami to New York City in the Archdiocese of New York’s building. The move enables more engagement with international humanitarian partners and the United Nations, where they have consultative status on the Economic and Social Council.

Wessels’ office in Atlanta is about the average size of the homes of families they serve in Haiti and Colombia. The homes typically have metal or wood siding, dirt floor and no running water or electricity.

“We are an order of relief, and we go where others won’t go. We’re working in the slums of Haiti cleaning sewage from the streets and trying to get them clean water,” said Wessels.

They also are improving sanitation around Cite Soleil where Haitians lack even toilet facilities. In schools, they built latrines with water faucets.

“The kids show that they actually go in the latrines, but at the same time you look over there and there’s someone squatting, going in a hole in the schoolyard at the school. So it’s a cultural thing,” her explained. “We’ve got a lot to do. We call it WASH — water, sanitation and hygiene — that we need to continue to build on particularly in those slums of Haiti but also a little bit in Mexico and Colombia.”

Northeast of Santa Marta, Malteser works in the desert region of La Guajira, near Venezuela. The organization built a concrete facility for use as a health clinic. It is part of a larger primary health initiative to rehabilitate and equip 20 health centers and train 40 health care workers and midwives.

Malteser’s latest challenge is the million Venezuelan refugees who have poured in to Colombia.

Catholics are encouraged to support the efforts, whether by sharing Malteser’s good work with friends and joining their social media network or raising money and creating awareness campaigns in their parish.

As a reminder of the labors involved in this work, he keeps a banana leaf vase in his living room presented to him by a family in Colombia.

“These are people who live in abject poverty. They bathe in the river, go to bathroom where they can go. Hopefully they can get a regular supply of water. We have rebuilt a couple of the homes in those communities; they are actually concrete,” Wessels said. “They need assistance to live a life with dignity. We need to help those families in crisis in all the different countries we’re in.”

NEXT: For all the talk of sex, ‘Humanae Vitae’ took it seriously