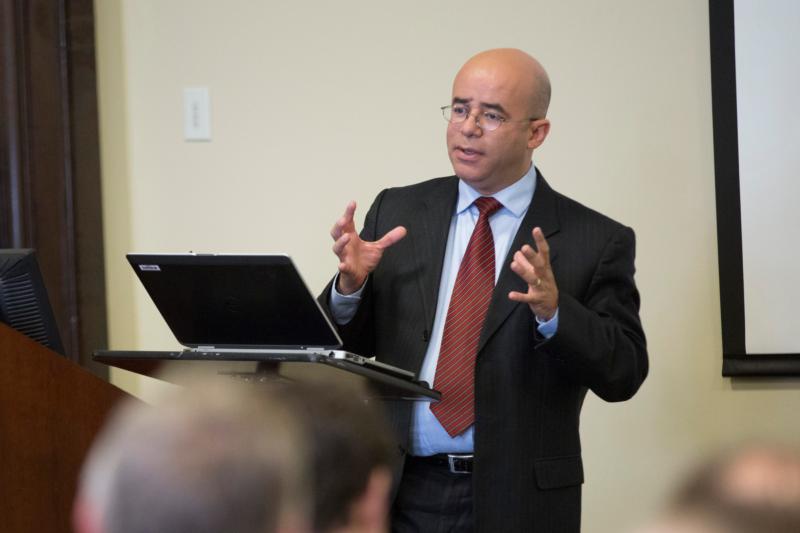 Hosffman Ospino, assistant professor of theology and religious education at Boston College’s School of Theology and Ministry, delivers a lecture in 2017 at The Catholic University of America in Washington. Ospino told Catholic News Service in an interview that emerging in the national encuentro process as it unfolds is the need for all U.S. church leaders to strengthen outreach to Hispanic youth and young adults. (CNS photo/Jaclyn Lippelmann, Catholic Standard)

WASHINGTON (CNS) — As the National Fifth Encuentro process unfolds across the United States, one of the emerging voices is the need to strengthen outreach to Hispanic youth and young adults.

The conversation should engage all pastoral leaders and not be considered an issue exclusive of Hispanic ministry, said Hosffman Ospino, associate professor of theology and religious education at Boston College and a member of the leadership team planning the Fifth Encuentro, or V Encuentro, process.

“The decision-makers, the gatekeepers, the power brokers, the people who are managing budgets and developing programs, many of these people have no idea what’s going on with Hispanic youth,” Ospino told Catholic News Service. “Some of them think that they know, some of them don’t want to know, some of them are scared to know. There’s got to be a massive, massive process of education.”

About 60 percent of Catholics in the U.S. age 18 or younger are Hispanic, according to research from the Center for Applied Research in the Apostolate. Also, among young adults, nearly one in four Hispanics choose not to self-identify as Catholics, and on average they make that decision by age 25, according to the Pew Research Center.

Institutional self-preservation is one of many reasons Ospino offers for the need of widespread outreach.

“By the time they become adults and start having their families, the Catholic Church needs to find a way to connect with them, so they will see those churches, those dioceses and those schools as their home,” he said.

Growing vocations among young Hispanics in the U.S. also has been a frequent topic of conversation throughout the encuentro process as people call for more priests that share not only the language and knowledge of the culture, but who come from their own backgrounds, said Ken Johnson-Mondragon, national coordinator of research for V Encuentro.

“The children of the immigrants who came in the ’80s, ’90s and early 2000s, are all growing up, they’re Catholic, they’re looking for services; they don’t see themselves as U.S.-born Hispanic Catholics mirrored in the ecclesial leadership,” Johnson-Mondragon said in an interview.

“There’s only one Hispanic U.S.-born priest for every 23,000 U.S-born Hispanic Catholics right now, so that’s another area that we need to put a lot of focus on: How do we strengthen the families and especially help families to become incubators and supporters of religious and clerical vocations in the church,” Johnson-Mondragon said.

Father Jose Eugenio Hoyos, director of the Spanish Apostolate in the Diocese of Arlington, Virginia, knows firsthand the need to accompany families as a way to build a stronger faith among youth.

The problems Hispanic youth may frequently face are very complex, he notes, among those are family separation concerns due to possible deportations, teen pregnancy, violence and crime, lack of access to quality education, and the loss of family and human life values.

“One of our goals we have right now is to make stronger families, stronger marriages, and people will realize that that is what’s important for them, then the new generations will follow them,” Father Hoyos said.

As have other encuentro participants, Father Hoyos also sees the value in the dialogues and the collaborations between church leaders and the Hispanic community that this process has sparked.

“The community are like in (their) expectation. They want to see what the final recommendations for us into the Church are and want to start working hard because we are one Church, we have one Christ,” he said.

Ospino, who has written many studies on Hispanics and the Catholic Church, offers a few pieces of advice on making Hispanic youth ministry more effective:

— The church must engage in a massive process of training or re-training every pastoral leader about the realities of Hispanic Catholics.

— U.S. bishops and Catholic leaders must make substantial efforts to actively reach out to Hispanic youth at the parish level.

— Existing structures such as Catholic schools, Catholic universities, youth ministry and religious education programs must be made available to Hispanic youth.

“We have an obligation, we have a pastoral responsibility,” Ospino said, referring to Pope Francis’ invitation to ‘primerear,’ or to take the initiative to reach out and evangelize.