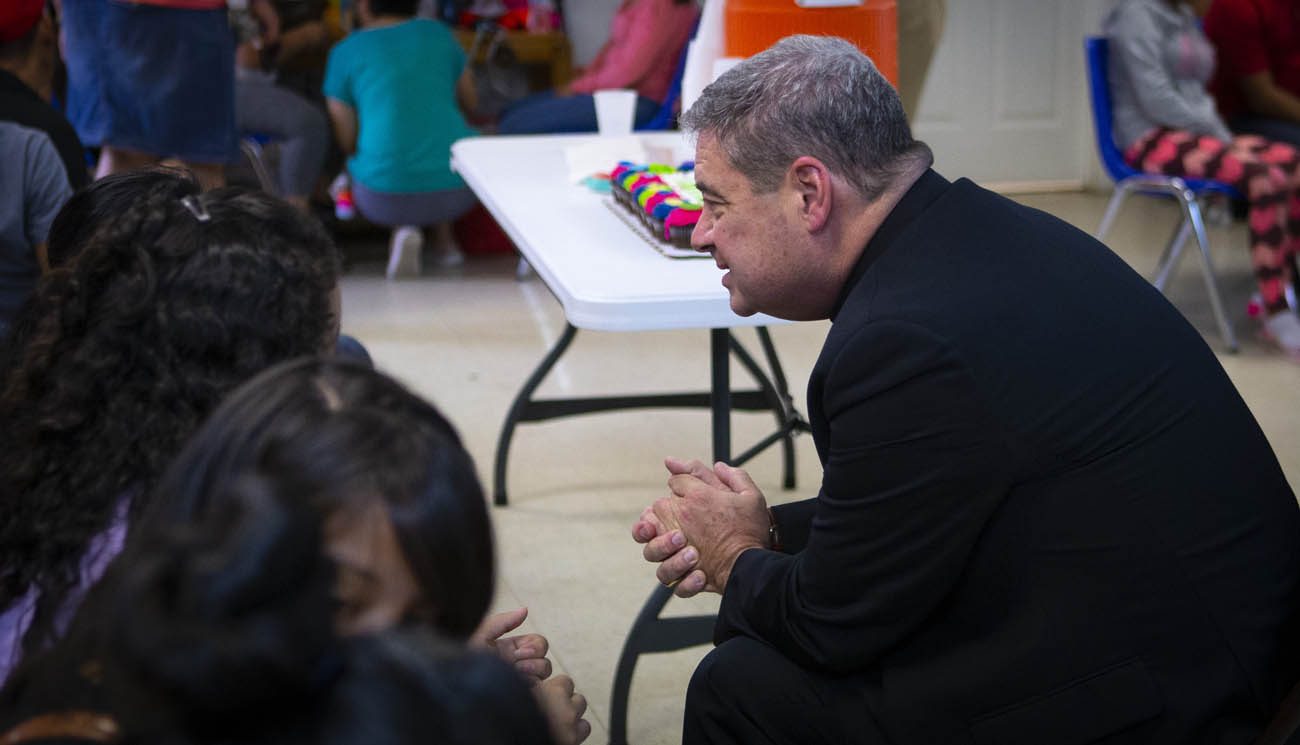 Auxiliary Bishop Robert J. Brennan of Rockville Centre, N.Y., talks to an immigrant woman, recently released from U.S. custody, July 1, at a Catholic Charities-run respite center in McAllen, Texas. A delegation of U.S. bishops traveled to the Diocese of Brownsville, Texas, to learn more about the detention of Central American immigrants at the U.S.-Mexican border. (CNS photo/Chaz Muth)

MCALLEN, Texas (CNS) — The journey for many of the new migrants entering the U.S. near the border town of McAllen involves a mix of hardship and blessings.

Having made the treacherous trip through the desert landscape and across the border, the lucky ones find themselves welcomed with food, water and human warmth at a Catholic-run humanitarian center in downtown McAllen.

But having just conquered the life-changing crossing, many of the migrants also find themselves immediately facing an unknown world and future ahead.

Though many bishops come to know many immigrants in the dioceses where they serve, except for the bishops along the border, few prelates witness that initial phase of the immigration journey that a group of bishops was privy to in early July.

They fed and spoke with a group of newly arrived immigrants to the U.S. at a Catholic Charities center and visited the controversial facilities where migrant children and teens have gotten their first taste of the U.S. — in detention — while temporarily separated from family. The bishops gave them rosaries and Bibles following a Mass they celebrated at one of the centers.

With their actions of charity and faith, they inserted themselves into the heart of the radioactive immigration debate the United States is experiencing, and one in which some Catholics remain aligned with political party ideology rather than with what the church is saying on the topic.

The way the bishops see it, they were simply answering the call of Pope Francis, to “share the journey,” a campaign started in September 2017 that called on Catholics and people of goodwill around the world to spend time with migrants, to come face to face with them, perhaps serve them in some fashion and hear their story.

Caritas Internationalis kicked off the campaign internationally last year and it is being promoted in the U.S. by groups such as the U.S. Conference of Catholic Bishops’ Migration and Refugee Services.

“The journey ahead is still a tough journey, a difficult journey,” said Auxiliary Bishop Robert J. Brennan of Rockville Centre, New York, one of the prelates on the trip.

The migrants have to settle in, find work, learn the language and, in some cases, face “the biases,” he said.

“There’s always that fear,” Bishop Brennan said in a July 1 interview with Catholic News Service after the visit to the respite center run by Catholic Charities of the Rio Grande Valley in McAllen. “I know it’s not easy, but I think the people I met today are driven by a sense of a hope-filled future. They want to build their lives up, they want to provide for their families. The children are actually looking forward to school.”

Bishop Brennan, along with USCCB president Cardinal Daniel N. DiNardo of Galveston-Houston and Bishop Joseph C. Bambera of Scranton, Pennsylvania, took part in the visit to the center, along with local Bishop Daniel E. Flores of Brownsville and Auxiliary Bishop Mario Aviles, also of the Brownsville Diocese. Archbishop Jose H. Gomez of Los Angeles joined the group July 2 and celebrated Mass at one of the facilities with the children and teens.

To explain the situation to Catholics and others opposed to the presence of the migrants and to how they entered the country, Bishop Brennan said he focuses on the humanity of the situation. But it is important to listen to all sides of the situation, he said.

“Even people who would want to be tougher on the (immigrants), we all share that sense of humanity,” said Bishop Brennan. “I think there is compassion, but we have to acknowledge people’s fears and acknowledge them as valid. We have to start meeting everyone where they are and recognizing those fears and concerns.”

There are solutions to bring about security at the border in ways that are humane and that’s what Bishop Brennan said he wants to get across. And those who may be voicing their stance against the migrants, “they’re not heartless,” Bishop Brennan said, but they might be reacting to other factors.

Seeing the whole picture involves talking to some of the immigrants, he said.

Bishop Bambera said he heard repeatedly from those he met in Texas about the fear they were facing and the urgency to leave to protect their lives or the lives of their children from imminent danger. It was a story repeated, too, to Cardinal DiNardo, when he spoke with the recent arrivals.

His hope, Cardinal DiNardo said in July 2 interview with CNS, was to “let all Catholics in our country know that we welcome immigrants. … You cannot look at immigration as an abstraction when you meet” the people behind the issue and the church stands with those at the margins.

For the bishops, whose actions and words are amplified and often publicly scrutinized, “sharing the journey” when it comes to immigration meant sharing a story that some in their flock resist hearing because of the political rhetoric surrounding the issue. But the prelates tried to direct the attention away from the politics of it and directed it toward its human cost and why the church cares about it.

“It’s not just a matter of politics, it’s a matter of humanity,” said Archbishop Gomez during a July 2 news conference closing the prelates visit.

The origin of the trip began in early June when Cardinal Joseph W. Tobin of Newark, New Jersey, called on his fellow bishops at a meeting in Florida to organize the visit to the border “as a sign of our pastoral concern and protest against this hardening of the American heart,” a phrase he has used to refer to the anti-immigrant atmosphere and harsh sentiments toward immigrants in the country.

Regardless of the political implications, some like Kevin Appleby, senior director of international migration policy at the Center for Migration Studies of New York, maintain that the life and death implications and damage to families by the Trump administration’s policies merits the involvement of the church.

“The visit to the border was an important step, but bishops across the country need to be loud and clear that President Trump and his administration should not prosecute asylum-seekers who are fleeing for their lives, detain them indefinitely, and deny them due process protections,” he said. “This is a moment in which the Catholic community should be united in their opposition to the administration’s zero-tolerance policy, as it undermines family unity, a core principle of Catholic teaching.”