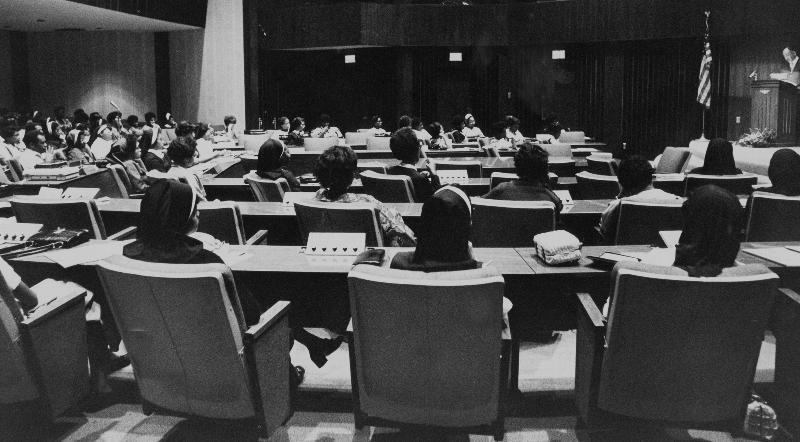 Members of the National Black Sisters’ Conference are pictured in an undated historical photo. The organization’s founding came out of a meeting of black sisters in August 1968 in Pittsburgh organized by Mercy Sister Martin de Porres Grey. She was inspired by the first meeting of the National Black Catholic Clergy Caucus held in Detroit earlier that year. (CNS photo/courtesy the Josephites)

WASHINGTON (CNS) — Fifty years ago, Josephite Father William Norvel thought it was time for black priests to come together.

The year, 1968, was a tumultuous one in American history. The country was struggling to implement civil rights for blacks, protests of the Vietnam War became common and some were violent, and young people rejected the authority of their parents’ generation. 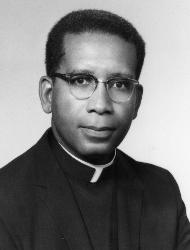 Josephite Father William Norvel and dozens of black priests met in Detroit in 1968 for the first meeting of the National Black Catholic Clergy Caucus. Father Novel, pictured in an undated photo, is now 82 and retired in Atlanta. (CNS photo/courtesy the Josephites)

The black priests wanted to support each other. They also wanted to discuss how to respond to the times and gain the church backing to better evangelize black communities.

More importantly, they wanted to confront the racism they were experiencing within the church. The priests wanted to feel accepted for who they were: African-American clergy who could share a rich cultural heritage but were feeling suppressed by white-dominated church leadership.

Father Norvel and dozens of black priests met in Detroit in April in the first meeting of the National Black Catholic Clergy Caucus. The meeting came soon after the Rev. Martin Luther King Jr. was assassinated. Questions abounded in the minds of the priests.

“I felt at that time we needed to bring to the attention of the church the racism experienced in our seminaries and in our church,” said Father Norvel, now 82 and retired in Atlanta, recalling that first gathering.

The priests returned to their parishes resolved to “have the church do something about” racism, he said.

Mercy Sister Martin de Porres Grey was the only woman religious to attend. She has since left religious life. The organization’s history records that she was so inspired by the gathering that she organized a similar meeting of black sisters in August later that year in Pittsburgh. About 150 women attended, marking the founding of the National Black Sisters’ Conference.

The sisters, too, wanted to support each other and address racism within the institutional church as well as in their own congregations, recalled Sister Josita Colbert, 80, a member of the Sisters of Notre Dame de Namur in Baltimore who attended the gathering. Today she serves as the congregation’s vocation director.

“It was amazing and overwhelming at the beginning,” she told Catholic News Service. “We had speakers who challenged us in terms of what was going on in the world (then) and here in the United States as black people and what we as black religious women were going to do about it.”

The priests’ and sisters’ organizations have had a vibrant history and will celebrate their 1968 founding July 28-Aug. 2 in New Orleans. The seminarians and deacons will be there, too.

Father Kenneth Taylor, who pastors two parishes in the Archdiocese of Indianapolis and is president of the National Black Catholic Clergy Caucus, told CNS this year’s gathering will be a time of celebration for all four organizations.

The joint meeting also will be one to reflect on the role of African-Americans within the church, “especially during a time when we seem to have lost the interest of the church leaders because of the strong Hispanic immigration into the country,” Father Taylor said.

The organizations do not want to create a rift with Hispanic Catholics, but rather want to make sure diocesan bishops do not shrink African-American outreach while expanding Hispanic ministries, he said. 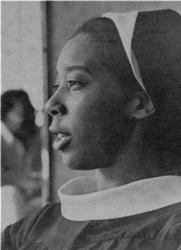 Mercy Sister Martin de Porres Grey, pictured in an undated photo, was the only woman religious among dozens of black priests who gathered in Detroit in 1968 for the first meeting of the National Black Catholic Clergy Caucus. (CNS photo/Global Sisters)

“This gives us an opportunity to come together in mutual support and encouragement,” Father Taylor explained. “It also gives us a chance to come together to talk about the needs of the black community and what we can do to help black Catholics become more engaged in the church.”

A deep concern for racism underlies the organizations today. Some clergy and women religious were outspoken about the racism they saw in the 1960s. Their strident stances in those early years often alienated diocesan or congregational leadership.

Although the stridency may have been dialed back a bit today, their views have not faded. Black priests and women religious continue to say they want the church to confront racism so that all the faithful can achieve true equality.

Father David Benz, 75, who was ordained to the priesthood in 1975 in the Archdiocese of New York and now is retired, said at times he feels African-Americans in the church almost appear “invisible.”

“I belong to the same church. I know what the social teachings of the church are and we as a church see this and ignore that,” he told CNS.

Father Taylor credited the U.S. Conference of Catholic Bishops for creating its Ad Hoc Committee Against Racism, which is finalizing a pastoral letter on racism across American society as well as the church. A vote on the document is planned for the bishops’ general assembly in November.

“It leaves the impression that the Catholic Church is pulling out of the black community,” Father Taylor said.

Just as worrisome is the rise in white supremacy, overt racist comments in the media and in politics, and emerging policies that harm minority communities. The priests and women religious said they believe the church must become more vocal in offering the moral guidance necessary to change people’s hearts.

Sister Roberta Fulton, a member of the Sisters of St. Mary of Namur and president of the National Black Sisters’ Conference, credited congregations of women religious for addressing racism within their structures. She and others called for stronger efforts to promote religious vocations among African Americans as key to addressing their concerns.

“People are not entering religious life like they used to, so we’re looking at other ways for your people to understand the call,” Sister Fulton said. One option is to encourage young people to become associates of a congregation. “Those associates, some have become sisters. They learn some things about the sisters and what we do, where we minister.”

Precious Blood Father Clarence Williams, senior parochial vicar at St. Joan of Arc Parish in Chagrin Falls, Ohio, in the Cleveland Diocese, was among the organizers of the black seminarians’ organization soon after the priests’ caucus formed. He said that the early annual joint gatherings of the associations helped encourage participants to recommit to their ministry.

“Meeting yearly with the religious women and priests and really reflecting on our reality in our communities, within our diocese, within assignment, we found our wisdom in that community to stay (in ministry),” Father Williams said. “Those without the support didn’t make it. It became to discouraging. It became too hostile,” he said.

For women religious, the annual gathering was just as inspiring.

“The black sisters conference was wonderful because it brought us all together,” recalled Sister Juanita Shealey, a member of the Congregation of St. Joseph in Cleveland. “We sang, we danced, we prayed, we talked about how wonderful it was to see other black sisters.

Members of both organizations also lamented the overall declining number of vocations to the priesthood and religious life, especially among African-Americans. With fewer vocations, it also means fewer opportunities for African-Americans to assume leadership positions in the church.

“Over the years we have made recommendations to get priests named (bishops). … But it seems as if the church is much more concerned about the Hispanic community than they are about the black community,” Father Benz said.

Having more African-Americans in leadership, especially as bishops, would help with evangelization, Father Benz added.

The New Orleans gathering will give participants a chance to reflect on such questions. Attendees also will honor past and present leaders, those whom Father Taylor called “exemplars.”

He said rather than honor one person with an award, 50 exemplars have been identified and will be identified at the gathering.

The honor will serve to show not just where the organizations have been, but, Father Taylor said, to but hopefully will inspire members to carry on their legacy to achieve full acceptance in church and society. 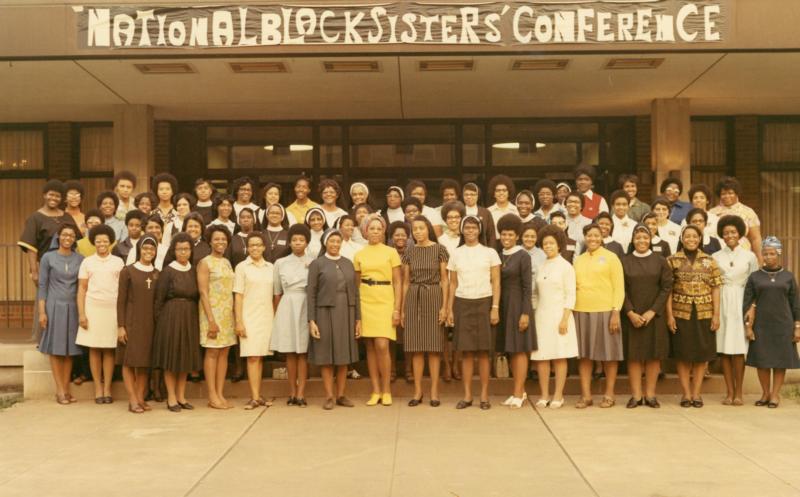 Women pose in 1969 outside the National Black Sisters’ Conference headquarters in Washington. The organization’s founding came out of a meeting of black sisters in August 1968 in Pittsburgh organized by Mercy Sister Martin de Porres Grey. She was inspired by the first meeting of the National Black Catholic Clergy Caucus held in Detroit earlier that year. (CNS photo/courtesy the Josephites)

NEXT: Here are summaries of some of Judge Kavanaugh’s most notable opinions