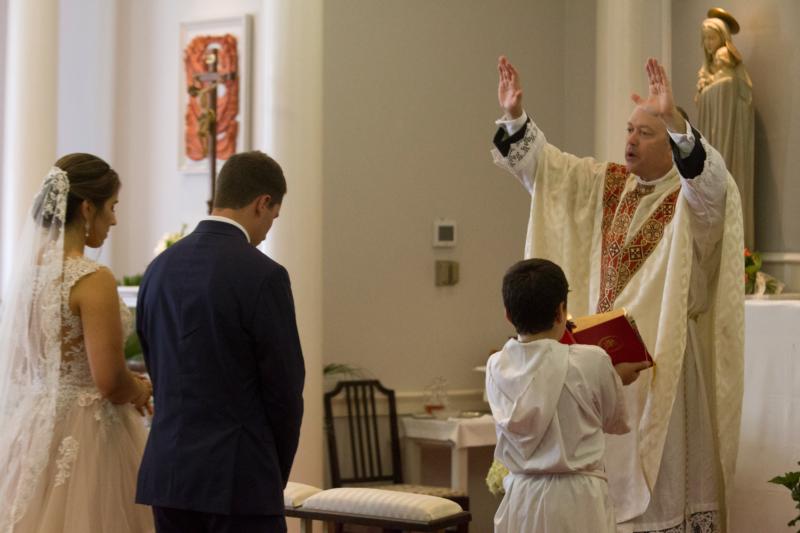 A priest blesses a couple during their June 1 wedding at a Catholic church in Middleburg, Va. Fifty years ago in issuing his encyclical “Humanae Vitae,” Blessed Paul VI “reaffirmed the beautiful truth that a husband and wife are called to give themselves completely to each other,” the president of the U.S. Conference of Catholic Bishops said July 25. (CNS photo/Bob Roller)

WASHINGTON (CNS) — Fifty years ago in issuing his encyclical “Humanae Vitae,” Blessed Paul VI “reaffirmed the beautiful truth that a husband and wife are called to give themselves completely to each other,” said the president of the U.S. Conference of Catholic Bishops.

“Marriage reflects the love of God, which is faithful, generous and life-giving. Through their vocation, spouses cooperate with God by being open to new human life,” Cardinal Daniel N. DiNardo of Galveston-Houston said in a July 25 statement marking the 50th anniversary of the document.

Subtitled “On the Regulation of Birth,” the encyclical reaffirmed the church’s moral teaching on the sanctity of life, married love, the procreative and unitive nature of conjugal relations, responsible parenthood and its rejection of artificial contraception.

“Blessed Paul VI, who bore the criticism of ‘Humanae Vitae’ with charity and patience, courageously affirmed that when we love as God designed, we experience true freedom and joy,” Cardinal DiNardo said. “He has also been proven correct in his warnings about the consequences of ignoring the true meaning of married love.”

Before Blessed Paul was elected to lead the church, St. John XXIII had appointed a small committee to study the issue of the regulation of birth.

Blessed Paul expanded the commission, which included several married couples. The commission’s work ended in 1966 with the leaking of a report by the majority of members asserting artificial contraception was not intrinsically evil. The leaked report heightened expectations of a major change in church teaching.

The pope rejected the majority’s recommendations and, instead, upheld traditional church teaching against artificial contraception, saying that the only licit means of regulating birth is natural family planning. In the document, he also asked scientists to improve natural family planning methods “providing a sufficiently secure basis for a regulation of birth founded on the observance of natural rhythms.”

At the time of its release, it was greeted with protests and petitions. But the 50th anniversary has been marked by conferences, lectures and academic discussions as theologians, clergy, family life ministers and university professors have explored what its teachings mean for the 21st-century church.

“On this anniversary, I encourage all to read and prayerfully reflect upon this encyclical, and be open to the gift of its timeless truths,” Cardinal DiNardo said. “We wait in joyful anticipation for the canonization of Paul VI in October.”

PREVIOUS: Fall in France breaks Indiana teen’s back, but not his or family’s faith