Fall in France breaks Indiana teen’s back, but not his or family’s faith 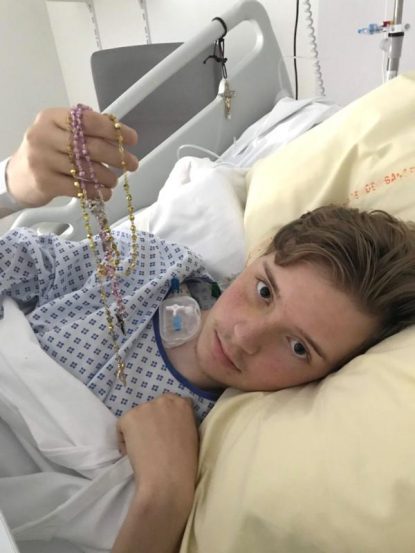 From his hospital bed in France, Alex Kalscheur, 18, a member of Our Lady of the Greenwood Parish in Greenwood, Ind., holds two rosaries he touched to a relic at Notre Dame Cathedral in Paris July 6. They were still in his pocket later the same day when he fell 30 feet, fracturing one vertebrae and destroying another. Kalscheur was scheduled to return home July 25. (CNS photo/courtesy Kalscheur family)

INDIANAPOLIS (CNS) — On July 6, 18-year-old Alex Kalscheur had only five days left of a two-week visit to France, staying with longtime family friends.

“He had just gotten his Eagle Scout Award and was one of the youngest managers at McDonald’s ever,” said his mother, Amy Kalscheur.

The trip to France was “a big celebration of several things. It was a big deal for him to visit them,” she said.

Earlier that day, Alex, a member of Our Lady of the Greenwood Parish in Greenwood, went to first Friday Mass at Notre Dame Cathedral in Paris. While there, he purchased two rosaries and touched them to a relic believed to be Christ’s crown of thorns, retrieved from Jerusalem by St. Helen in the fourth century.

That evening, he and his hosts were enjoying a large gathering at a chateau in the Alps. Alex still had the two rosaries in his pocket when tragedy struck.

“Alex said, ‘Mom, it was so beautiful. The stars came out, and I wanted to see them better,'” said Kalscheur, repeating her son’s recounting of the incident. “So he stepped up on a 2-foot wall and looked up. He doesn’t remember how it happened, but he fell, and on the other side of the wall it was 30 feet down.”

The fall fractured one of Alex’s vertebrae and “imploded” another, Kalscheur said, sharing the explanation from the doctors in France in an interview with The Criterion, newspaper of the Archdiocese of Indianapolis.

She spoke to the paper while she was in France, staying as long as possible each day by Alex’s side in the hospital while he recuperated. He was to arrive home July 25.

“The bones of his spine need to heal. Until that happens, he’s in a great deal of pain, and he can’t sit upright.”

According to a short video she posted on her Facebook page July 23, Alex is to enter a rehabilitation center in Indiana, where he will stay for about a month.

Msgr. Mark Svarczkopf, pastor of Our Lady of the Greenwood, has provided the family with not just spiritual support, but empathy as well.

“I told (Amy), when I was Alex’s age I broke my back in exactly the same place,” he said. “It’s life changing. I don’t do all the things I did before the accident. It changed me. An injury like that does affect you the rest of your life.”

Yet the Kalscheurs — Amy, husband Michael and their seven additional children ranging in age from 9 to 22 — see God’s presence in the midst of the chaos.

“The amazing thing is, he didn’t have a scratch on his body except on an elbow, which happened after the fall,” Amy Kalscheur said. “The doctors said he landed as if cradled.

“The miracles just keep unfolding,” she added. “The doctors in France tend not to be so optimistic (in general), yet his doctors are saying he will walk. They don’t know if he’ll have full capability, and it will be a struggle, but they are optimistic.”

Other blessings, she said, include the presence of two doctors at the party who were able to assist Alex during the 30 minutes it took for the ambulance to arrive. Additionally, through a series of connections, a friend of Kalscheur’s knew of a doctor who lives a 20-minute walk from Alex’s hospital.

When she heard of the Kalscheurs’ plight, the doctor invited Amy and Michael to stay with her as long as necessary. Michael returned home July 16.

Being able to receive the Eucharist daily has been a blessing, too, said Amy Kalscheur.

“He loves the Mass,” she said, noting that Alex trains altar servers at Our Lady of the Greenwood and serves as a master of ceremonies for weekend Masses at the church.

“He’s the type of kid who, if for some reason we go to Mass at noon, he’ll go back a second time to emcee at 6 p.m. [Mass]. If they need servers, he’ll [serve] two Masses. He has a love for the Mass that I think one rarely sees in someone his age. He’s a very spiritual person. His love for Christ is so great.”

Kalscheur said the outpouring of prayers and support from their parish, family, friends and even strangers has been “overwhelming.”

Yet there are still practical and logistical issues to manage — primarily, getting Alex home to recover.

The Kalscheurs were looking at a cost of $75,000 to $100,000 for a flight that could accommodate Alex’s physical situation in order to get him home and also cover the cost of having medical attendants on board.

But people stepped up to help. A GoFundMe campaign was started online, and as of July 23 donations totaled $74,355. The goal is $100,000. Our Lady of the Greenwood parish sold baked goods after each Mass July 21 and 22, raising $5,000. Other efforts were being coordinated to help the Kalscheurs.

When asked about the kind of support the family is receiving, Amy Kalscheur paused to stifle her tears.

“It’s overwhelming to me, the generosity of others,” she said, her voice choked with emotion.

Such efforts are not all that give hope to the Kalscheur family. Their faith sustains them day in and day out.

“After my husband finished praying a rosary by Alex’s bedside, he felt a large hand on his shoulder, and he felt peace. That one moment is carrying Michael,” Amy Kalschuer said.

“Faith has been so crucial,” said Alex’s 21-year-old sister, Olivia Kitchell, a member of St. Michael the Archangel Parish in Indianapolis. After receiving the news of her brother’s accident, she and her husband immediately prayed the rosary.

“The first and only thing we could do was pray,” she said. “It’s necessary just to trust, because there is absolutely nothing we can do.”

“We’re not the only ones (in the world) who are suffering, and we have to be careful not to think we’re alone in our suffering,” Amy Kalschuer told The Criterion. “We all suffer together, and the glory is that when we suffer with Christ, we can rise with him.”

NEXT: Cardinal calls ‘timeless truths’ in ‘Humanae Vitae’ a gift to church