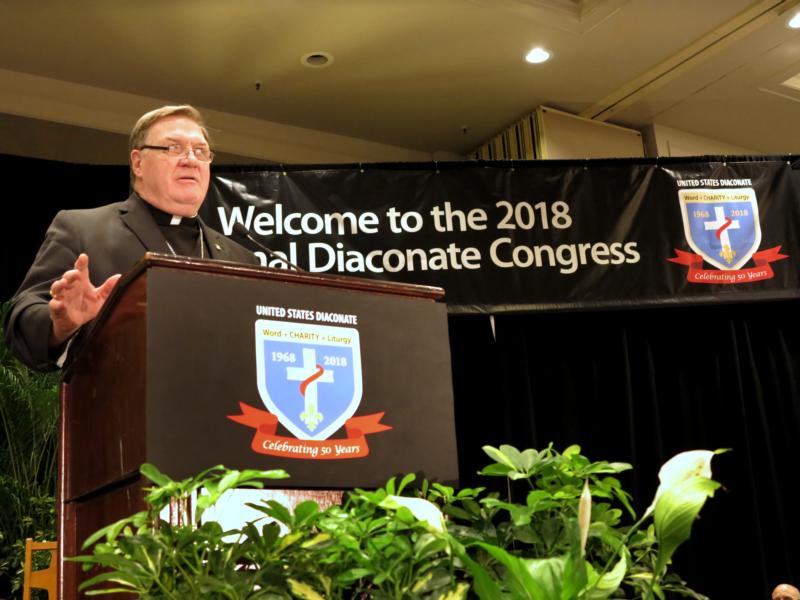 NEW ORLEANS (CNS) — While the ministry of the deacon has changed in the Catholic Church’s history, Cardinal Joseph W. Tobin of Newark, New Jersey, said deacons today are a sign of what Christians are called to be in their service of God and neighbor.

Speaking at the 2018 National Diaconate Congress in New Orleans July 22-26, Cardinal Tobin said the diaconate is absolutely crucial to the church’s life. Deacons have a threefold ministry of “word, sacrament and charity … permeated by a commitment to charity and justice.”

“The deacon brings the church’s ordained ministry to every dimension of human life — from workplace, marketplace to home, to school, to hospital, nursing home and prison.”

Cardinal Tobin traced the permanent diaconate’s restoration to its mention at the Council of Trent in the mid-16th century. Five centuries later, the Second Vatican Council finally implemented it.

Pope Paul, who oversaw the completion of Vatican II after the death of Pope John XXIII, who had convened it, gave three reasons for reinstating the diaconate, the first rank of holy orders: to enhance the church, embellish it and increase its beauty; to strengthen for the sake of others, those men already engaged in diaconate functions; to provide assistance in areas of the world suffering from clerical shortages.

Within a year, the U.S. bishops received permission from the Vatican to institute the permanent diaconate on American soil. Cardinal Tobin said the growth was rapid — 1,000 deacons nationwide within a few years. Today, there are 18,500 deacons in the United States, representing half of all deacons in the world.

“Vatican II echoed the church’s ancient practice by describing the deacon as a special minister of Christ and the church in the service of the liturgy, word and charity,” Cardinal Tobin said. A deacon’s work “signifies Christ — Christ the servant, Christ the deacon — in his vocation.”

Are deacons necessary today? “The answer must be a resounding yes,” Cardinal Tobin said. “And, not simply as a steppingstone to the priesthood or as a remedy to the shortage of priests.

“The Second Vatican Council and all the popes that have followed agree that ‘diakonia’ or service is a (fundamental) element of the church. … Without forms of the diakonia, the church is no longer the church, it becomes something else.”

He thanked deacons for putting flesh on the diaconate of today’s church and their wives for unwavering support. He believes in a double miracle of Pentecost from which the order of deacons emerged.

The foundational diaconate elements take scriptural root in the sixth chapter of the Acts of Apostles when the disciples selected seven men of good reputation and strong faith — such as Stephen — to continue their ministry. These heard the word of God and spread it through charitable acts in their own culture.

“Their reception to the good news doesn’t require them to forfeit who they are. … They find the principle of unity that does not abolish culture, that does not pretend to make one-size fits body of Christ,” Cardinal Tobin said. “It’s one that is united by the principle of the Holy Spirit … who is the moisture that holds us together.”

He sees the deacon’s life of action, charity and service modeled after Jesus’ life and quoted Mark 10:45: “For the son of man did not come to be served but to serve, and to give his life as ransom for many.”

“This modeling highlights the nature of the sacred character, the permanent mark that comes upon a deacon at his ordination,” Cardinal Tobin said.

Cardinal Tobin believes the greatest love of all, which impels the deacon, is to “lay down his life for his friends.”

The cardinal recognized the competing obligations a deacon has to the church and family, but told them, “Did Christ ever love more eloquently than from the cross? … We must remember to serve frequently is to suffer for the sake of the Gospel, for the sake of Christ and his church.”

He said that “a deacon’s actions at the altar reflect his identity of serving others, leading the cry for mercy in the penitential rite, guiding the faithful in his baptismal call to pray through the intercessions, assisting the priest in preparing the altar, calling the faithful in expressing their unity of peace prior to making that unity a reality in the reception of Eucharist.”

Those in the audience laughed when he mentioned that the deacon, not the priest, even if it is the pope, has the last word at Mass in dismissing the faithful.

The dismissal, he said, “can help the assembly understand where the mission of the church can take them. A permanent deacon is not a glorified altar server. There should be an unmistakable link between the service during the Eucharist and as visible witness to the Eucharist as a mystery to be lived.”

Cardinal Tobin implored deacons to follow Pope Francis’ words in his apostolic exhortation “Amoris Laetitia” (“The Joy of Love”) to empower marriage and family life. He said deacons and their family could contribute to the life of the church through their sacrament of marriage.

He repeated St. John Paul II’s words about the unique challenges and contributions that a deacon and his wife make to the church.

“The deacon and his wife must be a living example of the fidelity and indissolubility in Christian marriage before a world in dire need of such signs. … They strengthen the family not only of the church community but the whole of society. … They show how the obligations of family, work and ministry can be harmonized in the service of the church’s mission.”

Cardinal Tobin said he was “praying that the spirit of the living God may fall fresh on deacons and their families so that your efforts to give flesh to the love of Christ, your struggles to be a source of new life and in the times of joy and sorry will provide salt and life to all the families of the church.”

He believes permanent deacons have a second gift: to close the chasm between faith and love, a chasm that divides the Eucharist from daily life. By their “deceivingly simple gesture” at the eucharistic table dismissing the assembly at Mass’ conclusion, he believes deacons can close this gap.

“It is the deacon who has the final word: ‘The Mass has ended, go in peace,'” he said.

NEXT: Curbs on religion abroad can trip up Americans’ faith practices