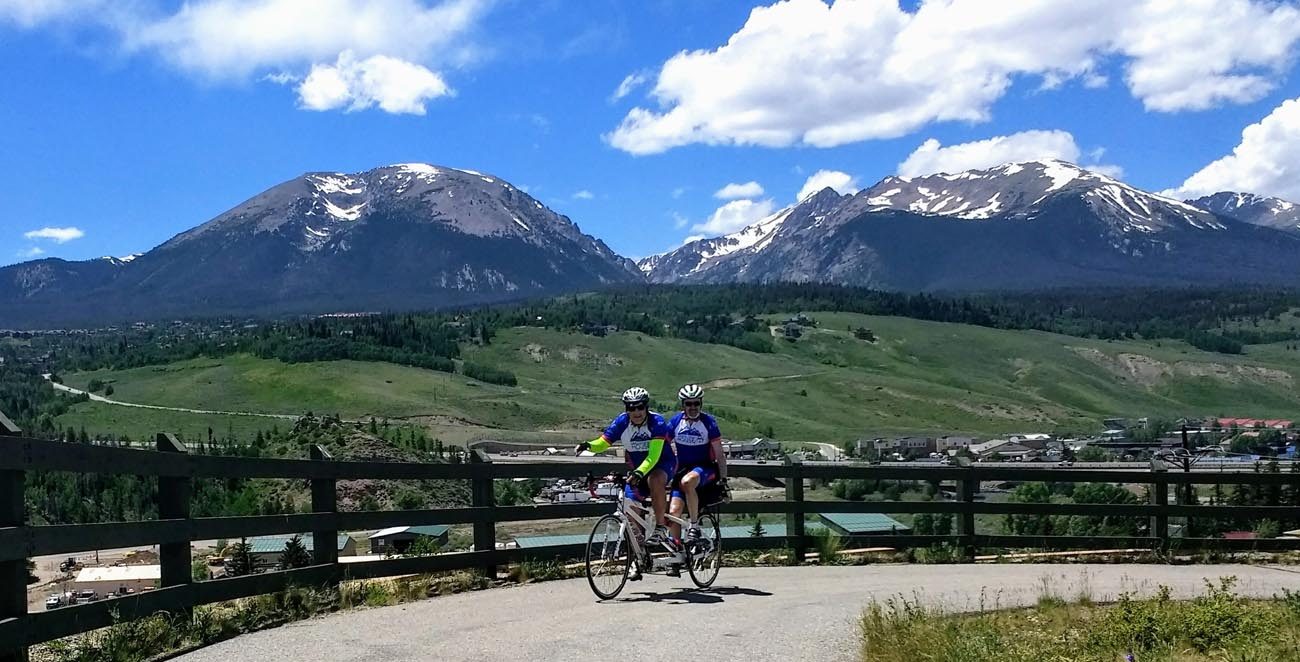 Tom Dea and Andre van Hall, part of Team Samaritan House cycling team, take part in the Ride the Rockies June 9-15 in Frisco, Colo. Participating in the high-altitude ride of more than 400 miles in the Colorado Rockies over six days, the team raised money for programs and services provided by Denver Catholic Charities for homeless people. (CNS photo/courtesy Catholic Charities of Denver and Team Samaritan House)

WASHINGTON (CNS) — A bike ride of almost 420 miles in the Colorado Rockies over six days sounds grueling but it is not nearly as difficult as being homeless year-round, said the co-captain of a team that made the high-altitude ride to raise money for programs and services provided by Denver Catholic Charities for homeless people.

“How easy do you think it is to be homeless 24/7 and 365 days a year?” Tom Dea said. “The ride is tough but easy compared to what some people are going through. If the ride was easy, it would not be as good for our physical, mental and spiritual health.”

Dea and fellow co-captain, Tom Schwein, led Team Samaritan House in participating in the Ride the Rockies June 9-15. It is considered the “marquee cycling event of summer in Colorado.” Team members came from around the country to participate. More than 30 teams took part in the ride, many with their own causes to support.

In interviews with Catholic News Service via email, Schwein, Dea and others on the 60-member Team Samaritan discussed why they participated and how the funds they raised will be used.

“By the time you get to day three of Ride the Rockies, you awake to sore tired legs, and ask yourself, ‘What am I doing?” Schwein said. “But you often reflect during the ride on why you are participating in Ride the Rockies — to raise awareness and money for the homeless.”

Carolyn Milano joined the team’s ride from Delano, Minnesota, where she is a member of St. Maximilian Kolbe Parish. A breast cancer survivor and mother of four, she has now completed five Ride the Rockies, she said.

She wanted to do this ride, she said, “because the journey itself is weaved together with raising funds, the camaraderie, encouragement, support and friendship of team riding and working together for a cause greater than themselves.”

Homelessness is “a pressing need that must be addressed by our society,” Milano said. “Each time I came home from the hospital (after cancer surgery and treatment), I realized just how blessed I am.

“My home is filled with love. All the people and things that are important to me are housed in my home. I look around and see my life, pictures of my family and children growing up displayed proudly in every room,” she added, describing her children’s “first pair of shoes, their artwork, records of achievements and their handmade cards for her.

“These are the foundations and building blocks of what we call family,” Milano said. “When you realize there are too many people that don’t have that welcoming door to enter their home, it drives and motivates you to make a difference.”

The team is named for Samaritan House, a ministry begun in 1986 and operated by Catholic Charities in the Denver Archdiocese. It provides the homeless with temporary housing and a myriad of other services.

Funds raised by the cycling team will go toward programs to help shelter residents receive food, clothing, case management and “the tools to achieve self-sufficiency and build a new life,” said Schwein.

He and Dea take the team’s riders to Samaritan House in downtown Denver to serve dinner to the homeless to help them “understand why we ride.”

“I have found over the years” the visit, he added, “is truly a game changer for our team.”

Father John Therese Creus, a member of the Congregation of St. John, was invited to join the ride this year. He said daily Mass for the riders.

“I wasn’t looking for a specific cause but was open to what God wanted me to do,” said the priest, who ministers at All Souls Catholic Church in Denver, where Father Sam Morehead is pastor. “I was intrigued by the invitation to join a long bike ride tour, then when I visited the Catholic Charities women’s shelter, I became more connected to the mission of the ream.”

During Mass, he said, he tried to focus on the mission of the ride and in his homilies talked about “the distinction between social work and charitable works of mercy. Charitable works are each of us being extensions of Christ.”

“Such activities will have spiritual consequences on the person who allows themselves to become living instruments of Christ as well as (on) the recipients of these service activities,” the priest said.

Dea rode tandem with Andre van Hall, who is blind.

That experience was both “awesome and very demanding,” Dea told CNS. “It has hopefully gained me a friend for life. I am in total awe that Andre van Hall, a blind man who had stage 3 melanoma last year during our first Ride the Rockies, can have a more positive attitude than 99 percent of the population in the U.S.”

Van Hall said the team support and Dea’s humor made the ride “a joy. … Being part of a team that is larger than life let’s you really know you are not alone!”

The problem of homelessness is “truly a problem in the word but hard to understand,” he added. “So many of us are just one paycheck from living on the streets while living in the richest and most altruistic country in the world.”

Editor’s Note: More about Team Samaritan House can be found here.  A video recapping the team’s participation in Ride the Rockies can be seen here.

Cyclists with Team Samaritan House taking part in the Ride the Rockies June 9-15 pose for a photo in Breckenridge, Colo. By participating in the high-altitude ride of more than 400 miles in the Colorado Rockies over six days, the team raised money for programs and services provided by Denver Catholic Charities for homeless people. (CNS photo/courtesy Catholic Charities of Denver and Team Samaritan House)

NEXT: Trump can reshape Supreme Court with pick to succeed Kennedy