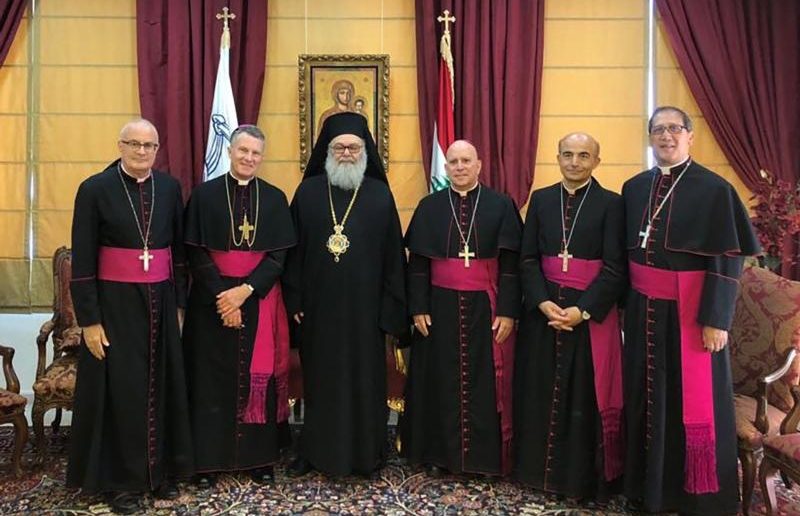 During a June 18-25 visit to Lebanon, a contingent of U.S. bishops met with Orthodox Patriarch John X of Antioch and all the East. Pictured with the patriarch are Maronite Bishop Gregory J. Mansour of Brooklyn, N.Y., Archbishop Timothy P. Broglio of the U.S. Archdiocese for the Military Services, Archbishop Samuel J. Aquila of Denver, Bishop A. Elias Zaidan of the Eparchy of Our Lady of Lebanon of Los Angeles and Bishop Oscar A. Solis of Salt Lake City. (CNS photo/courtesy Bishop Solis)

SALT LAKE CITY (CNS) — During a visit to Lebanon, Bishop Oscar A. Solis of Salt Lake City saw the contrast between building bridges and constructing walls to deal with differences of religion.

In recent years, Lebanon has struggled to provide services for 2 million migrants and refugees fleeing conflict and persecution in their homelands. Religiously, the country is predominantly Catholic and Muslim; the Maronite Catholic rite was founded near Mount Lebanon in the late fourth century.

“If you just listen to the radio or watch the news on TV, you don’t really get the exact picture” of what life is like in that part of the world, Bishop Solis said.

He met with Christians who had to flee their country because of religious persecution or military conflict.

“Listening to the story of what they went through to escape, and their children being traumatized by violence, by fear and uncertainty, it hits you right there in your heart,” he told the Intermountain Catholic, Salt Lake City’s diocesan newspaper.

Bishop Solis went to Lebanon as part of a delegation that included: Maronite Bishop Gregory J. Mansour of Brooklyn, New York, chairman of Catholic Relief Services’ board of directors; Archbishop Timothy P. Broglio of the U.S. Archdiocese for the Military Services, chairman of the U.S. Conference of Catholic Bishops’ Committee on International Justice and Peace; Archbishop Samuel J. Aquila of Denver; Bishop A. Elias Zaidan of the Eparchy of Our Lady of Lebanon of Los Angeles.

They met with different key Lebanese leaders, including President Michel Aoun, Bishop Solis said. Aoun explained that of the country’s 4 million citizens, 2 million live abroad. He also described the situation of the 2 million refugees in Lebanon, many of whom are Muslim.

Aoun is worried about the country’s economic ability to provide services to the refugees, because it strains the government’s resources, said Bishop Solis, adding that the president took pride in his country being a center for international religious dialogue and ecumenism.

The Lebanese president also appealed to the international community to help find the refugees a permanent home, said Bishop Solis. He and the other U.S. prelates visited some refugee camps and spoke with people housed there.

They also went to a shelter for people who are victims of violent crimes and human trafficking from Ethiopia, Eritrea, Egypt, Iraq and the Philippines. Aid to the shelter is provided by Caritas Internationalis, a group of Catholic relief organizations that works with the poor and oppressed in more than 200 countries worldwide.

CRS, the international relief and development agency of the U.S. bishops, is a member of Caritas Internationalis.

“The work of Caritas Internationalis and Catholic Relief Services in reaching out is incredible,” Bishop Solis said. “It makes you feel proud to be Catholic to see how our Catholic Church reaches out to meet the needs of those people who need love, care and compassion, tenderness, to make them feel the dignity of being considered as human beings. … In attending to the needs of these displaced migrants, it’s heartbreaking to see them and hear their stories.

“To see it with your own eyes, to see their faces, makes a lot of difference. You immediately feel the hurt, the ache, the pain is tremendous. It makes you cry,” he added.

In talking with the refugees, Bishop Solis heard many of them say that with political, economic and religious instability, there is no future for them in their country of origin and nothing to return to, which makes it difficult to repatriate them, he said.

The U.S. bishops also met with Christian patriarchs of the region whose communities face religious persecution in their countries. “They are happy that there are people who express an interest in knowing what’s happening in the Middle East,” Bishop Solis said.

In addition, the U.S. bishops met with some of Lebanon’s Sunni and Shiite leaders, who along with the Christians “are trying to foster religious dialogue and bridge issues with an ecumenical spirit,” Bishop Solis said. “It’s a beautiful thing to learn about the need for global solidarity — the need to be more aware of what is really going on in those areas.”

The U.S. delegation also went to visit the Monastery of St. Maron Annaya, which houses the tomb of St. Charbel, and the Kadisha Valley, where Christian monastic communities have existed for centuries. To see one of the monks, the bishops hiked for two miles up a steep, rocky goat trail. The monk, who has been living there for 40 years, had a “glow of joy in his face,” Bishop Solis said, adding that the monks “live a life of solitude, a life of prayer, a life of work and study — that’s all they do.”

On their last day, the bishops went to Tyre. It was near there — as Chapter 4, Verse 27, of St. Mark’s Gospel records — that a Syro-Phoenician woman begged Jesus to cure her daughter. Being in a place where Jesus walked was inspiring, Bishop Solis said.

While in Tyre, the bishops also were able to see the massive cement wall that Israel is building in the Golan Heights to separate it from Syria.

“I saw with my own eyes how differences can divide people, instead of building bridges,” Bishop Solis said, adding that he also could view the nearby Syrian refugee camps. “What kind of life do they have?” he asked.

By contrast, the bishops also met with some Catholic sisters who live in a camp among Palestinian Muslims.

When asked what they do, the women religious said, “We bring the presence of Jesus Christ to them,” and in this, Bishop Solis said, “you see the hope and innate goodness of humanity.”

NEXT: Dioceses restate policy on politics after criticism of priests at rally