Dioceses restate policy on politics after criticism of priests at rally 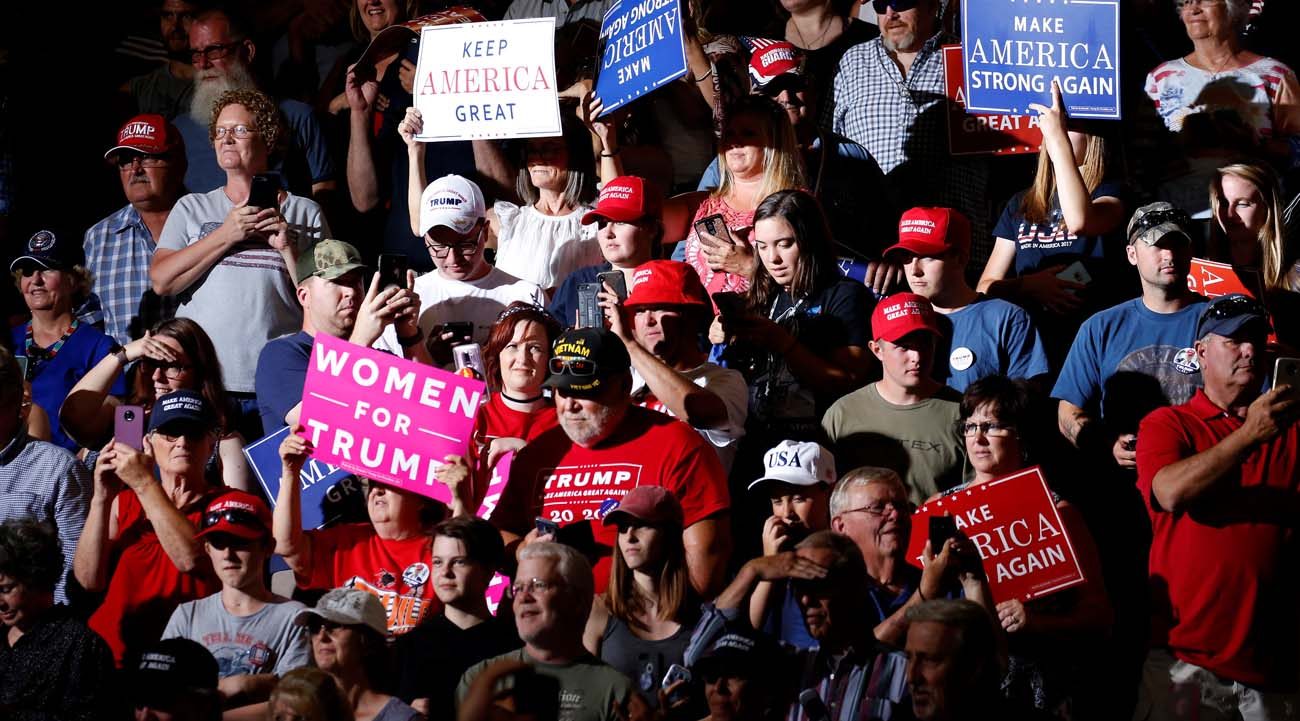 Supporters await the arrival of U.S. President Donald Trump during a Make America Great Again rally July 5 in Great Falls, Mont. Following criticism of four Catholic priests who attended the rally wearing clerical attire, Montana's two Catholic dioceses have reiterated their respective policies on political involvement that say support for or opposition to a particular candidate by any representative of the diocese is not permitted. (CNS photo/Joshua Roberts, Reuters)

GREAT FALLS, Mont. (CNS) — Montana’s two Catholic dioceses have reiterated their respective policies on political involvement, saying that support for or opposition to a particular candidate by any representative of the diocese is not permitted.

The dioceses posted statements on their Facebook pages after four Montana Catholic priests were strongly criticized locally and nationally for wearing clerical attire to President Donald Trump’s Montana rally July 5. They garnered national attention because they were seated in the front row behind Trump’s podium.

Two of the priests were from the Great Falls-Billings Diocese, headed by Bishop Michael W. Warfel, and two were from the Helena Diocese, which currently does not have a bishop, since Bishop George L. Thomas was named to head the Diocese of Las Vegas. Msgr. Kevin O’Neill is diocesan administrator.

Msgr. O’Neill reiterated his diocese’s policy: “Religious leaders should avoid taking positions on candidates or participating in political party matters even while acting in their individual capacity. Although not prohibited, it may be difficult to separate their personal activity from their public role as a church leader.”

In his statement, Bishop Warfel urged a careful review of the Great Falls-Billings diocesan policy on political activity, which states “supporting or not supporting a particular candidate as a representative of the diocese is not permitted.” The policy also cautions against parishes taking a public stand on a candidate and distributing voter materials “prepared by other organizations.”

In the main part of his statement, Bishop Warfel reviewed the actions of the priests, saying he had talked to his two diocesan priests, who have acknowledged they shouldn’t have worn priestly garb and have apologized for any hurt their presence caused. He also reached out to the two Helena diocesan priests.

He also commented that accusations made against the four men that they applauded at “inappropriate remarks” made by Trump were not borne out by a close review of video of the event.

Bishop Warfel said he had no idea the priests planned to attend the rally and noted that he himself had been invited but declined to go.

“I was likely just as shocked as most to see they were seated in a very prominent position” behind the podium, he said of the priests.

The four received an invitation to go to the rally from “an individual they know well” and “they had no idea they would be ushered to the front row behind the podium,” Bishop Warfel said.

“I know these priests well enough to affirm that they are almost always in clerical attire,” he said. “I know that being dressed in clerics was not a strategy on their part to gain political support for the president or any other candidate. It is simply how they normally dress. Unfortunately, this is not how their presence in clerical attire was received.”

From speaking to various people about the rally, Bishop Warfel said, he knows the crowd was mostly Republican, but Democrats were there too, as well as Protestants and other Catholics.

Bishop Warfel said the priests told him they expected to be back in the crowd, not the front row, and that in retrospect, they know “they should have moved to another location.”

“There has been an assertion by many,” Bishop Warfel continued, “that the four priests clapped following various mean-spirited or in appropriate remarks. I was able to watch the first part of the speech on TV but never witnessed any such reactions, other than some smiles.”

He said he stopped watching the broadcast because he had to go celebrate Mass at the Poor Clares Monastery. Later, he said, he received a report on the rest of the speech from someone in the diocese who had reviewed a videotape of it and by closely following a timeline of the tape, confirmed that the only applause from the priests was at a Trump comment about the need to remove MS-13 gang members.

Bishop Warfel said among numerous comments and emails he has received about the priests being at the rally, many said the “church/religion has no business being involved in politics.”

“If this means partisan politics, I agree,” he said. “If it means restricting religious faith to the sidelines, ruling out any engagement of religious groups — and some would just restrict Catholics — I completely disagree.”

Bishop Warfel said it would be hard to imagine a world where Catholic leaders do not speak out in the political arena on moral issues — against oppression of peoples and in support of human life and dignity, care for the environment and care for the poor and marginalized, to name a few issues.

He urged Catholics to take guidance on these issues from the U.S. bishops’ document “Forming Consciences for Faithful Citizenship.” He also emphasized Catholic social teaching and said Catholics have the moral responsibility “to hear, receive and act upon the church’s teaching in the lifelong task of forming his or her own conscience.”