If it is broke, fix it: Ideas on reshaping U.S. immigration policy 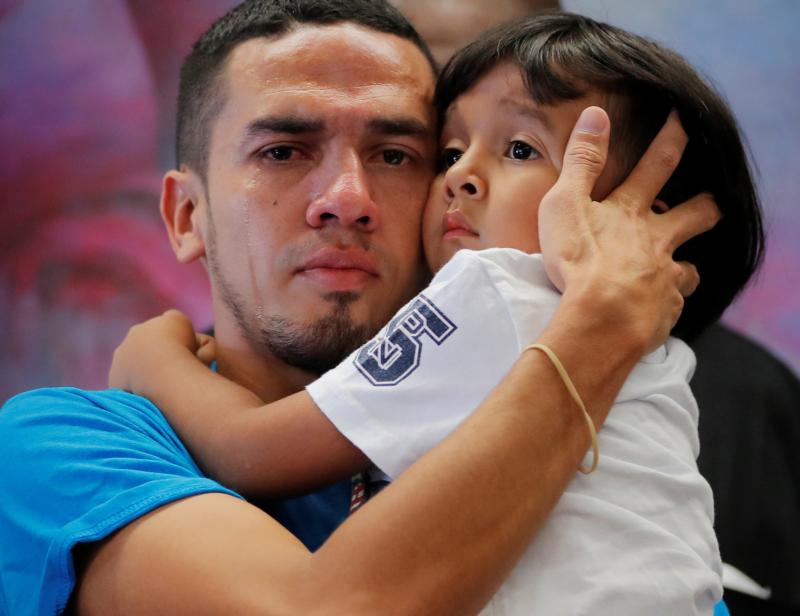 Javier, a 30-year-old immigrant from Honduras, cries as he holds his 4-year-old son, William, July 11 in New York when they were reunited after being separated for 55 days during detention at the Texas border. (CNS photo/Lucas Jackson, Reuters)

WASHINGTON (CNS) — In 2008, Kenan Thompson of “Saturday Night Live” unveiled a “financial expert” character named Oscar Rogers on the “Weekend Update” segment. His advice on the economy, shouted loudly and often as the nation was careening into the Great Recession, was “Fix it!”

That Oscar Rogers mantra would suit U.S. immigration policy as well, as people and advocates complain about a broken immigration system.

The U.S. bishops in 2003 published a pastoral letter, “Strangers No Longer: Together on the Journey of Hope,” which listed principles of reforming U.S. immigration policy. But 15 years later, how do those principles translate into concrete legislative proposals?

“This year, we’ve seen the failure to pass on both sides of Congress larger-scale bills that have fixes for DACA (Deferred Action for Childhood Arrivals), most recently here in the House,” said Ashley Feasley, director of policy for Migration and Refugee Services at the U.S. Conference of Catholic Bishops in Washington.

“(The month of) June had a couple of votes that they didn’t pass and (got) broken down from bipartisan negotiations at the beginning of June to negotiations within the Republican Party,” which controls the White House and both houses of Congress, Feasley added. “The bishops opposed both bills, which failed to pass.”

Currently, according to Feasley, “there’s a lot of focus on the family separation issue and the family detention issue” after the Trump administration’s “zero-tolerance” on border crossers caused an uproar once it was put into effect this spring.

President Donald Trump signed an executive order to reunite families, but not all children who were separated from parents have been reunited with them.

Feasley described one aspect of the immigration system’s brokenness: “Frankly, there has been an overreliance on administrative methods because there’s been an absence of consensus in Congress on passing legislation on the immigration issues that need to be solved.”

DACA, she said, is “a perfect example. The DREAM Act was first introduced in 2001 and it has been brought up in several iterations, either by itself or part of a comprehensive bill, on the House and on the Senate side. The Obama administration initiated the DACA program in 2012, and the Trump administration ended the program in 2017, and now there’s judicial challenges.”

One suit, brought by Texas and several Southern states, is challenging DACA’s legality. If a federal court agrees with Texas, that could prompt a legislative fix, Feasley said. But that is “reactive to the court case,” she added, and “there’s not a lot of proactive action going on now.” Depending on the midterm elections, Feasley said, a lame-duck session could see some immigration bills brought to the floor.

“We strongly believe that family-based immigration is one of the most important aspects. Then, after that, humanitarian issues. Protection for people seeking asylum, protection for people when things happen, the TPS (Temporary Protected Status),” said Jeanne Atkinson, executive director of the Catholic Legal Immigration Network.

“We need to legalize the people who are here. We’re talking about people undergoing background checks, paying fines and stepping forward. That is a component,” Atkinson said.

“We need to look at the system that we have and say, ‘What numbers, what level of immigration works for our country?'” she added. “Our system hasn’t been reformed in decades. So what was set up all those years ago doesn’t serve our country well.”

There are labor aspects to immigration, she noted. Currently, stricter enforcement coupled with low unemployment has resulted in fewer workers coming from other countries to perform available jobs. “It needs to be looked at and evaluated,” Atkinson said. “And you need to protect those people who are brought to this country to work: seasonal workers, but also the professional visas.”

Atkinson said, “Many people are paying taxes anyway, but (legal status means) getting better jobs and paying more in taxes. People who couldn’t pay taxes or knew how to pay taxes are paying taxes. So there are financial benefits for the country.” Those benefits, she added, “will pay off for decades in the future.”

She admitted there would be a high price tag to comprehensive immigration reform. But border enforcement, which Atkinson pegged at $22 billion a year, is “more than every other federal law enforcement as well as state employment protection agencies. We’re already spending massive amounts of money” — and still more “if you tried to deport all the people who have unauthorized status.”

Moreover, “there’s a very big price tag for inaction,” Atkinson said, the latest item on that receipt being “the psychological impact” of family separation and deportation of parents while their children are U.S. citizens.

“We need to change the law. It’s a poor system,” declared Sister Mary Ellen Lacy, a Daughter of Charity and immigration lawyer who is currently a grass-roots mobilization specialist for Network, the nun-run Catholic social justice lobby.

In her immigration law practice, she helped impoverished clients in Texas, Alabama and the New York City borough of Brooklyn. “They come because they want to live, and then they end up in the shadows. Some of them have been in here for 20 years,” Sister Lacy said. “And then they get picked up, and then they come to you. A woman’s husband doesn’t come home. And she comes looking for him. Was he in a raid?”

The fees, forms and time lags in following immigration law are “punitive,” she added. “Some people just wanted to bring their family members over. Or they fell in love, wanted to get married, and do it legally, and it took years. … It’s terrible when someone tells you, ‘We don’t think your marriage is legal,'” Sister Lacy said. “We have celebrities and politicians who get married several times over and no one questions their bona fides.”

Sister Lacy criticized the Trump administration actions that had “eliminated all the TPS. Most of the countries that we’ve granted TPS status to we’ve eliminated in the past year. People who’ve made a life for themselves 10, 20, 30 years. Now we’re saying you’ve got to go back to a country you don’t know. And they were here — with permission! These hardship cases are hard to see.”

Comprehensive immigration reform, “loosely quoting (House Speaker) Paul Ryan (R-Wisconsin) — is the best economic package we could ever produce,” Sister Lacy said. “I agree with Paul Ryan. But it’s been a long time since he said that,” putting that quote in 2012, when he was Mitt Romney’s GOP running mate on the party’s presidential ticket.

Sister Lacy has a six-point plan to fix U.S. immigration policy. It largely mirrors what the bishops sought in 2003.

Then, the bishops asked for an earned legalization program; a worker program to allow foreign-born workers to enter the United States safely; an increase in the number of family visa and a reduction in family reunification waiting times; restoring due process rights taken away by a 1996 immigration bill and eliminating the three- and 10-year re-entry bars which also were part of that law; “targeted proportional and humane” enforcement measures; and addressing the root causes of migration.

The bishops recognized a sovereign nation’s right to control and protect its borders, but opposed “some of the policies and tactics that our government has employed to meet this … responsibility.”

PREVIOUS: Deacons’ ministry of presence will be in forefront at upcoming congress

NEXT: If confirmed, Kavanaugh will keep Catholic majority in Supreme Court