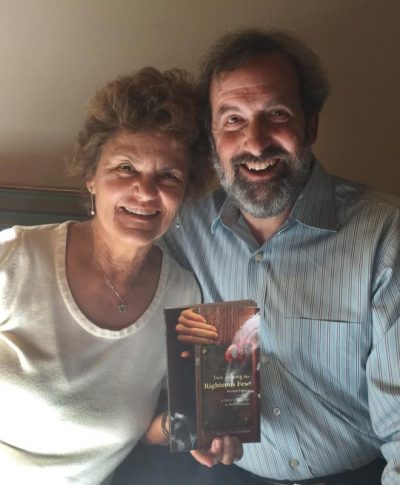 Marty Brounstein, author of “Two Among the Righteous Few: A Story of Courage in the Holocaust,” poses in early April with his wife, Leah Baars. (CNS photo/courtesy Carolyn Bart)

WASHINGTON (CNS) — Pardon Marty Brounstein if he’s got a personal stake in his latest book.

His wife is a featured character.

Brounstein this year wrote a second edition of “Two Among the Righteous Few: A Story of Courage in the Holocaust,” which details the story of how a Dutch Catholic couple, Frans and Mien Wijnakker, protected more than two dozen Jews at their farm in rural southern Netherlands during World War II. One of those Jews is his wife, Leah Baars, who was born at the Wijnakker home during her mother’s stay there.

It was “a story I stumbled into by accident,” said Brounstein, a management consultant who has written eight other books — including three titles in the “For Dummies” series — but, by his own admission, never anything like “Two Among the Righteous Few.”

In a telephone interview with Catholic News Service from San Mateo, California, Brounstein said the magnitude of the Wijnakker rescue effort didn’t hit home for him “until we made the special trip to the Netherlands for the first time, in May of 2009.”

“She had lost touch with the family for 25 years,” he said, but in making the trip, “she reconnects with the five Wijnakker siblings.”

Asked what role he thought the Wijnakkers’ faith played in their rescue efforts, Brounstein replied, “There’s no right or wrong answer to the question.” He said, “If you tend to be a faith-based person, you tend to view that faith was one of the reasons to do what they did. If you’re secular and not part of any one religion, it doesn’t involve your thought patterns — (it’s) the ethics of who you were, not ethics from their religion. ”

One thing for sure, according to Brounstein: The parish priest was not nearly as brave as the Wijnakkers.

“When we do the book discussions, his name comes up most in the Catholic schools more than the public schools. They’re oddly bothered by him. He doesn’t come across as being supportive and helpful. He’s expressing his anti-Semitism. He’s not necessarily an evil person, but there was far less clergy who were speaking out and being helpful than who were silent. He’s not atypical,” Brounstein told CNS.

“While we hold people of the cloth at a higher level, they’re human too. … People are complex. You see what he expresses. But why he’s a thorn is in that time period and especially in that countryside area, he’s the authority figure that everyone reveres and listens to,” he added, noting the priest neither stopped the Wijnakkers nor exposed them to the Nazis. “Luckily,” Brounstein said, “the Nazis never interrogated him.”

The term “righteous” is “the honor that goes to the non-Jews who risked their lives to save the lives of Jews,” Brounstein said. The most notable name may be that of Oskar Schindler, the focus of Steven Spielberg’s 1993 movie “Schindler’s List.”

During that 2009 visit to Holland, Brounstein and Baars were visiting with some of the grown Wijnakker children, when Frans Wijnakker Jr. “out of the blue, goes into the house, comes out with a picture. He doesn’t speak English,” Brounstein said. But with the help of his wife, who still knows Dutch, he hears Frans Jr. say, “My wife and I went to Yad Vashem (the Holocaust memorial in Jerusalem) last year, and here’s a picture of my parents on the Avenue of the Righteous.”

“I understood right away what that meant,” said Brounstein, who has visited Yad Vashem three times himself. “You don’t get that (honor) just by showing up.”

While the second edition of “Two Among the Righteous Few” has more material and photos than the first edition based on added visits to the Netherlands, and restructures the original story somewhat, he said, the story “always spoke to the ‘what’ Frans and Mien did, not the ‘why.’ They really wanted to make a difference. There was no glory in it, only danger.”

NEXT: Pew: Most Americans skeptical of benefits of gene editing for babies