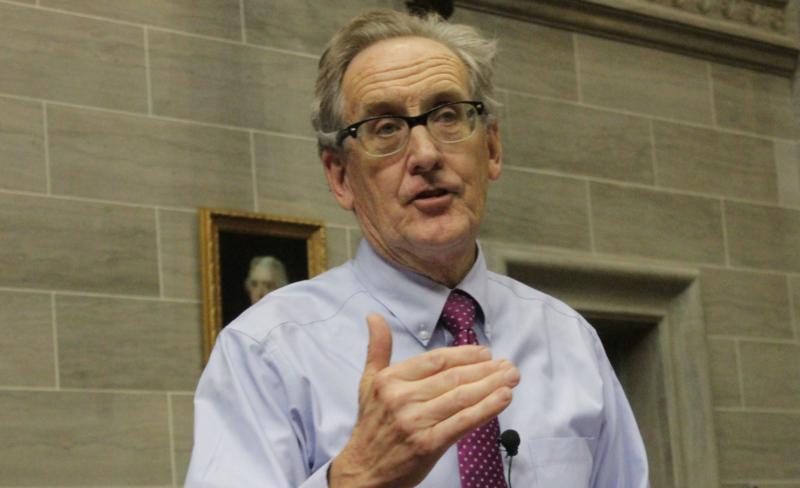 JEFFERSON CITY, Mo. (CNS) — Nineteenth-century German statesman Otto von Bismarck claimed that no one who respects the law or enjoys eating sausage should see either being made.

Mike Hoey, who recently retired as executive director of the Missouri Catholic Conference, spent four decades at the grinder, working to reconcile Catholic principles with the perennial realities of forging public policy.

“If we’re going to have a nonviolent civil society, we have to be willing to talk to people we don’t agree with — talk with them and work with them and at least try to reach some consensus and move forward,” he said.

Hoey admits that he’s a bit less idealistic than he was when he came home to Missouri 40 years ago. But he’s a better listener, having acquired a thicker skin and the long view of a man seasoned by battle.

Missouri’s bishops created the conference, the public policy agency of the state’s four Catholic dioceses, in 1967 to help people in the church advocate more effectively for foundational principles and the common good. Chief among these are the sanctity of human life and the inherent dignity of every individual.

Coalescing consensus around these essentials and applying them to laws and policies can be slow, tedious and often beholden to the whims of history and public opinion.

“Yet, there’s no alternative way to solve problems in a nonviolent manner than through negotiation and compromise and what we generally call the democratic process,” Hoey told The Catholic Missourian, newspaper of the Jefferson City Diocese.

The Catholic Church has a wealth of teaching on a broad range of interrelated issues, such as protecting the vulnerable and helping people in need.

“You take all of that into the public arena, and then you have to listen to other people,” said Hoey. “You have to negotiate in order to come to some kind of common good.”

“When people are really willing to work together, creative things happen,” he said. “You have people with different gifts, and if they come to the table as patriots and citizens with good intentions, together they may come up with a better solution than they would individually.”

As a lobbyist for the church, Hoey has found great satisfaction from some of the conference’s hardest-won victories.

Among these are guaranteed access to special-education services for children in Catholic schools; A+ Scholarship opportunities for Catholic high school students; establishment of the Missouri Children’s Healthcare Initiative; and numerous ways of protecting society from abortion while providing life-affirming alternatives.

He’s proud that the Missouri Catholic Conference remains a prophetic voice against the death penalty and in favor of a more restorative approach to criminal justice.

Progress on each of these requires a combination of principle, persuasion, hard work, cooperation and patience.

“You can have your principles and be very clear on those as a Catholic,” Hoey noted. “But when you enter the public-policy arena, you have to try to apply those principles in a practical way in negotiations with other people.”

Some think taking part in such negotiations is a betrayal of non-negotiable principles.

“But what you’re actually doing is advancing those principles to the greatest extent you can possibly get, in light of the circumstances you’re dealt,” he said.

He recalled St. John Paul II’s declaration that when an all-out ban on abortion cannot be attained, an incremental approach to promote an abortion-free society should be pursued.

“John Paul believed that if we can accomplish this by incremental change, that’s what we should do,” said Hoey. “Because in the meantime, we have to deal with people who don’t agree with us, and try to find a consensus in creating an abortion-free society.”

Hoey said that approach applies to many other issues.

For instance, the conference’s stand against the death penalty has been consistently strong.

“But what I’ve found through the years is that you first have to really listen to those who support the death penalty, particularly victims’ families,” he said. “When you do that, the way you express your position begins to change. You come at it with a better understanding of some of the dynamics involved.”

He maintains that this relational approach reflects Pope Francis’ call for a “culture of encounter.”

He noted that the church doesn’t condemn women who seek abortions but tries to help them in every way possible.

When they were first married, Mike and Mary Beth Hoey went to a poor parish in Walsenburg, Colorado, to take part in a Catholic outreach program.

While Mary Beth worked in special education, Mike got involved in parish ministry, spending many hours each week visiting individuals and families in their homes.

After that experience with people who are poor and lonely, he looked for a way to combine his background in education, his passion for social justice and Catholic outreach to the poor, and his knowledge of politics and government.

The Missouri Catholic Conference turned out to be a perfect fit. He joined the staff in 1979 and succeeded Louis DeFeo Jr. as executive director when DeFeo retired in 2000.

“I wanted to change the world,” Hoey recalled. “But what you soon find out is that the Lord is in charge and you’re not, and that you’re just a small piece of it. You have a gift and you do the best you can in giving that gift.”

He started out as a lobbyist and community organizer specializing in Catholic education. He also worked in rural life and family farm issues and later also got involved in health care and other issues.

He believes it’s important to keep praying and working for constructive dialogue among people of various religious, cultural and political persuasions.

“We are so divided in this country,” he said. “We need to pray for patience and to be able to listen to each other.”

Catholics can help God answer that prayer, he said, by actively seeking opportunities to listen by “talking to people we don’t normally talk to or going places we normally don’t go to.”

He suggested “trying to be open to new experiences and to listen to people with different ideas.”

“Getting out of our comfort zone isn’t always fun but it’s very necessary,” Hoey added.

PREVIOUS: Here are summaries of some of Judge Kavanaugh’s most notable opinions

NEXT: Kavanaugh’s faith ‘really shines through in who he is,’ says priest