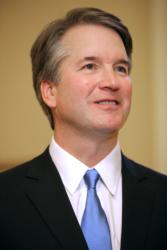 WASHINGTON (CNS) — Here are summaries of some of Judge Brett Kavanaugh’s most notable opinions while on the U.S. Court of Appeals for the District of Columbia Circuit:

— In Priests for Life v. HHS, Kavanaugh dissented from a decision by the D.C. Circuit Court of Appeals to refuse to rehear a challenge to a regulation in the Affordable Care Act that requires religious organizations that do not wish to provide contraception to submit a form to their insurer or the federal government, which then pays for contraception for the organization’s employees.

In his dissent, he argues that, while Burwell v. Hobby Lobby “strongly suggests that the government has a compelling interest in facilitating access to contraception for the employees of these religious organizations,” the regulations substantially burden the exercise of religion “because the regulations require the organizations to take an action contrary to their sincere religious beliefs or else pay significant monetary penalties, Also, the mechanism of submitting the form is not the least restrictive means which the government could use to achieve its interest.

— In Garza v. Hargan, Kavanaugh dissented from an en banc majority, which overruled an earlier panel decision and required the government to permit a pregnant 17-year-old immigrant without legal documents and held in custody to get an abortion. Kavanaugh said that the majority decision “is ultimately based on a constitutional principle as novel as it is wrong” and “a radical extension of the Supreme Court’s abortion jurisprudence. It is in line with dissents over the years by Justices Brennan, Marshall, and Blackmun, not with the many majority opinions of the Supreme Court that have repeatedly upheld reasonable regulations that do not impose an undue burden on the abortion right recognized by the Supreme Court in Roe v. Wade.”

— In PHH Corporation v. Consumer Financial Protection Bureau, Kavanaugh wrote a dissent arguing that the structure of the CFBP violates Article II of the Constitution by reducing the power of the president to control the executive branch. Since each head of the CFBP serves a fixed five-year term, Kavanaugh argues, presidents may spend entire terms with a CFBP head whom they oppose. “In sum, because of the consistent historical practice in which independent agencies have been headed by multiple commissioners or board members; because of the serious threat to individual liberty posed by a single-Director independent agency; and because of the diminution of Presidential authority caused by this single-Director independent agency, I conclude that the CFPB violates Article II of the Constitution.”

NEXT: Listening and negotiating not a lost art, says retired Catholic lobbyist