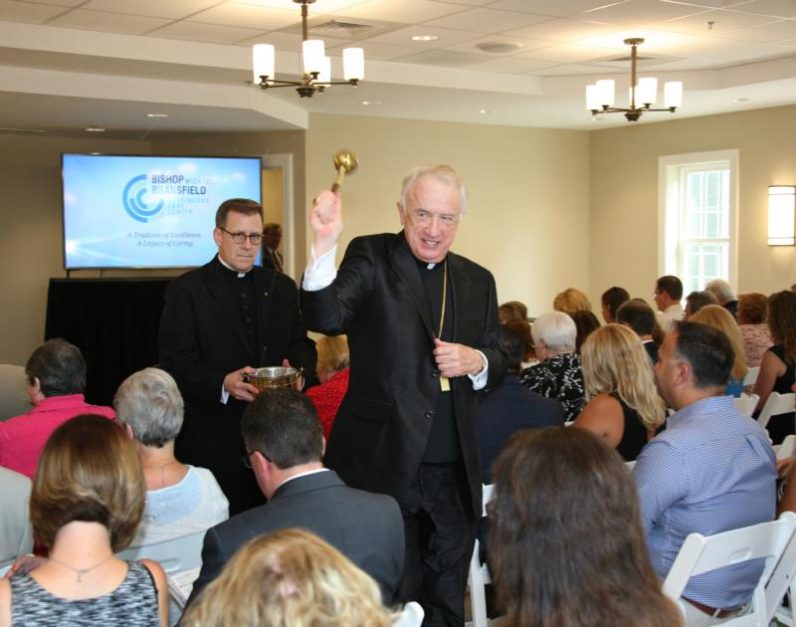 Bishop Michael J. Bransfield of Wheeling-Charleston, W.Va., blesses the new Continuous Care Center July 14 at Wheeling Hospital, which was named in his honor. With him is Msgr. Kevin M. Quirk, president of the hospital’s board of directors. (CNS photo/Colleen Rowan, The Catholic Spirit) See WESTVIRGINIA-CONTINUOUS-CARE July 23, 2018.

In a surprise for him, it was announced that the center has been named in his honor. “I am very grateful,” he said.

In his homily for the blessing and dedication, Bishop Bransfield said that the new center is for the community.

“This is for the people of the entire area that will live out their lives using it and, hopefully, pass it on to another generation,” Bishop Bransfield said in his homily, adding, “It will take care of people for generations to come.”

“The new center is the most modern, patient- and family-friendly nursing center anywhere,” Wheeling Hospital CEO Ron Violi said in a statement prior to the blessing and dedication. “Every inch of the building was designed with the highest level of care and comfort in mind, and for the convenience of patients and their loved ones.”

The new Continuous Care Center is a continuation of Bishop Bransfield’s commitment to health care in West Virginia.

In 2012, Wheeling Hospital opened a seven-story, 144,000-square-foot building addition known as Tower 5, which brought a variety of enhanced medical services to the state in the areas of trauma, pediatrics and critical care, among others.

Five years later, the bishop blessed the hospital’s Cardiac Catheterization Lab. In addition to chest pain and heart attack, the lab treats heart conditions such as atrial fibrillation and also implants pacemakers and defibrillators. It also is used to diagnose and treat virtually a many other cardiovascular diseases.

Wheeling Hospital has a unique role in the history of the diocese, Msgr. Quirk said in his remarks, noting that the hospital is older than the diocese. Bishop Richard V. Whelan helped found the hospital, he said, which was chartered in 1850.

“So it can be said that the diocese has been involved in health care throughout West Virginia longer than its own existence,” Msgr. Quirk said. “This is an integral part of preaching the Gospel. We understand from Christ, our savior, that it is our mission and our role to be his healing force in the world, to provide for the needs of those around us for the betterment of their health and well-being … to take care of the poor, to feed the hungry, to clothe the naked.

He said the Bishop Michael Bransfield Continuous Care Center is a gift to the people of the community that is part of that diocesan history of life and ministry, “reminding us that not only is care of the person an essential part of preaching the Gospel but so too is care of the person in the context of beauty.”

Msgr. Quirk added, “It’s one thing to care for people, it’s another thing to care for them well and that’s what we want to do here. To allow people their dignity by giving them individual rooms, their own restrooms — the things that we take for granted, and that they have rightfully earned by the gift of their lives. We are so grateful for Bishop Bransfield’s vision.”