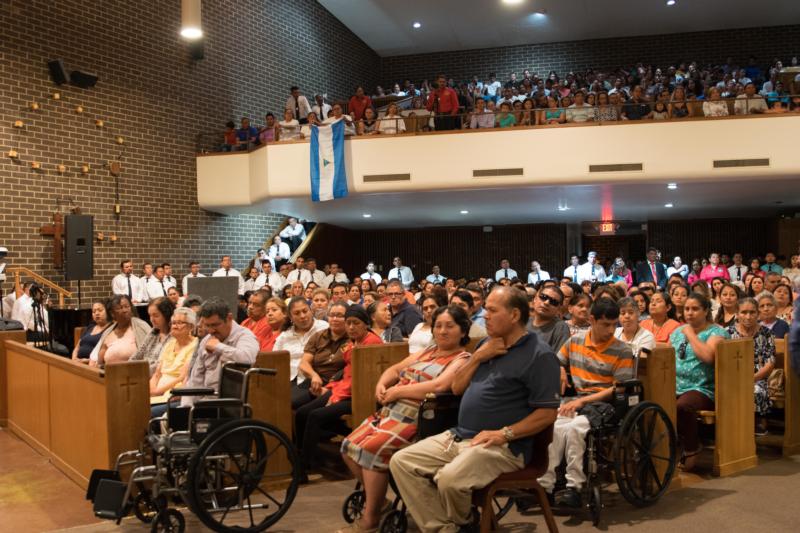 A man holds a Nicaraguan flag from the balcony at Holy Family Church in Dale City, Va., as about 1,000 people gather July 20 to pray for peace in Nicaragua. (CNS photo/Elizabeth A. Elliott, Arlington Catholic Herald)

DALE CITY, Va. (CNS) — When you are more than 1,000 miles away from home and your entire family is struggling with the violence from pro-government groups against the Catholic Church, what can you do?

“The only thing we can do here is pray,” said Arturo Downs, a native of Nicaragua who attends Holy Family Church in Dale City.

The Catholic Church in Nicaragua has faced numerous violent attacks from pro-government groups. Clergy and bishops were attacked July 9, including Cardinal Leopoldo Brenes Solorzano of Managua and his auxiliary, Bishop Silvio Jose Baez, and Archbishop Waldemar Stanislaw Sommertag, the apostolic nuncio, as they attempted to protect St. Sebastian Basilica in the city of Diriamba from an incursion by a pro-government mob, according to recent reports.

The church has provided humanitarian aid and attempted to mediate in the midst of a government crackdown on protests.

More than 1,000 Hispanic Catholics raised Nicaraguan flags and prayers for the country to support the bishops of Latin America and the Caribbean, during a Mass for healing for the people of Nicaragua July 20.

Father Jose E. Hoyos, director of the Spanish Apostolate of the Diocese of Arlington, celebrated Mass at Holy Family Church with Colombia native Father Liderman Orozco as the concelebrant.

The bishops of Nicaragua had requested prayers for the country from the entire world July 20, a day on which they prayed the prayer of exorcism to St. Michael the Archangel.

During the procession of gifts, Nicaraguans carried flags and received a blessing from Father Hoyos, who noticed a flag was carried upside down.

“When I asked why the flag was upside down, they said it was because they are asking the Lord to put the country in the right way,” he said.

At the end of Mass, the attendees offered a moment of silence for the more than 300 Nicaraguans who have been killed in the recent fighting.

“I believe we need to support those who belong to us, those who are part of this diocesan family, that we remind them they are not alone,” said Father Hoyos. “They have faith in us. They are Catholics and we believe that solidarity begins in our home, in our diocese.”

Father Hoyos said there are many Nicaraguans in the Northern Virginia area. “The church has to be with them and stand with them as an immigrant community.”

Elliott is a staff writer at the Arlington Catholic Herald, newspaper of the Diocese of Arlington.

NEXT: New hospital center part of church’s role to be ‘healing force in world’