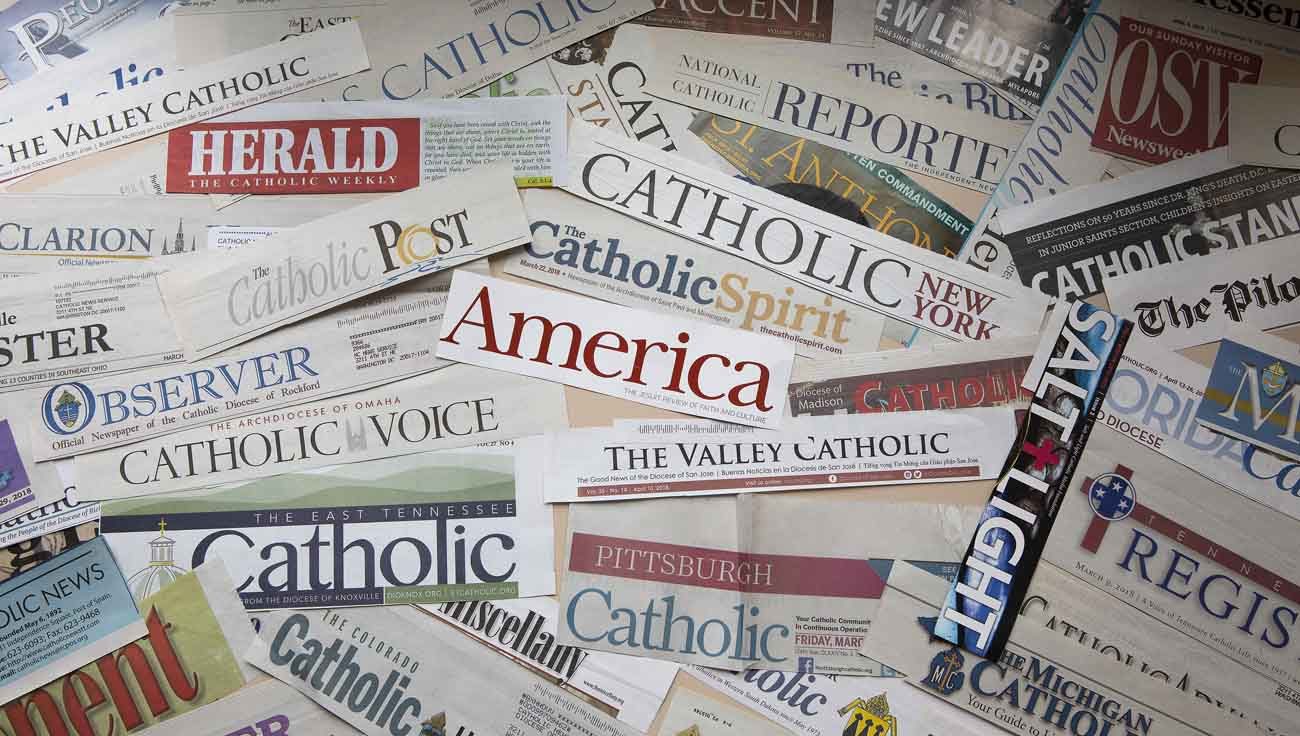 Newspapers of every type, including Catholic papers, are seeking relief from the U.S. government after six months of increased costs due to tariffs on imported Canadian newsprint. (CNS photo/Tyler Orsburn)

WASHINGTON (CNS) — Newspapers of every type, Catholic papers included, are seeking relief from the U.S. government after six months of increased costs due to tariffs on imported Canadian newsprint.

The Catholic Press Association, which includes English-speaking Canada, is a member of the STOPP Coalition, which has pressed the Commerce Department for relief. STOPP is an acronym for Stop Tariffs on Printers and Publishers.

Price increases due to the tariffs have socked the Pittsburgh Catholic three times already this year, according to Carmella Weismantle, advertising director and business manager. “And we’ve been told more are coming,” she said.

The newsprint tariff is different from the tariffs imposed by the Trump administration on goods produced elsewhere, most notably China. In the newsprint situation, a U.S. company, NORPAC, which owns a mill in Washington state, had complained that Canada was unfairly subsidizing its newsprint production. The U.S. Department of Commerce agreed, and tariffs were first slapped onto newsprint imports in January.

Tim Walter, CPA executive director, said the CPA board had agreed to join STOPP after CPA president Joe Towalski, editor of The Visitor, newspaper of the Diocese of St. Cloud, Minnesota, had recommended it. Walter added that Towalski noted the CPA had joined the alliance during this year’s Catholic Media Convention in June, although no questions were raised about the issue afterward.

“There was no financial commitment involved” in joining STOPP, Walter told Catholic News Service in a July 12 telephone interview. “They didn’t ask us to participate in meetings at this point in time. They just asked us to join the alliance.”

Other members of STOPP include a number of regional press organizations as well as national groups like the News Media Alliance, the American Society of News Editors, the Association of Alternative Newsmedia and the Association of American Publishers. Printers, paper makers and even the National Grocers Association, whose members’ ads appear in newspapers nationwide, are in the coalition.

Walter noted that the CPA’s monthly newspaper, The Catholic Journalist, has been affected by the tariff. “It’s traditional we would have a printer do our work pro bono, but because of the increase in print costs and newsprint costs, they’re asking us to pay the costs of newsprint for the first time in many years,” he said.

“We were warned” about future increases, Weismantle said. “We knew that this was coming down the pike. And our printer told us, ‘We have no alternative but to pass it on to our customers.’ I mean, what are they supposed to do?”

Mark Cohen, president of the Pennsylvania News Media Association, was part of a group lobbying six Pennsylvania members of Congress in June. “They made it sound like they’d heard of it, but they didn’t realize the calamity it would cause newspapers,” Cohen told CNS July 11.

“We said, ‘Look, you believe in jobs, obviously. … You believe in First Amendment rights. You believe in real news vs. fake news. You want good local reporters on the street. If you do, you need to be on our side. You can’t have it both ways. … You have to be with us.'”

Cohen said, “I think we have momentum. We were way behind the starting line on this and we were all caught off guard. Now that we’re mobilized, we’re getting the message out. We’re getting attention. Of course, we can’t predict how this goes.”

One potential remedy is a hearing before the International Trade Commission to lift the tariff, which is supposed to last for five years with annual review. The commission conducted a hearing July 7 on the tariff and is slated to vote on it Aug. 28, although its rationale, yea or nay, wouldn’t be known until September, according to Paul Boyle, senior vice president of public policy for the News Media Alliance.

“Many newspapers have taken steps to cut the number of pages that they produce. Some have laid off workers, which is not a good situation,” Boyle said. Cohen added some newspapers have reduced the number of days they print; the Pittsburgh Post-Gazette will now publish in print just five days a week.

Another remedy being pushed is the PRINT Act, introduced by Sens. Susan Collins, R-Maine, and Angus King, I-Maine. It has 24 Senate co-sponsors and 28 House co-sponsors. PRINT is an acronym for Protecting Rational Incentives in Newsprint Trade. The bill would suspend the tariff on Canadian newsprint and require the Commerce Department to review the economic health of the printing and publishing industries.

NEXT: All eyes now fixed on Kavanaugh and Roe