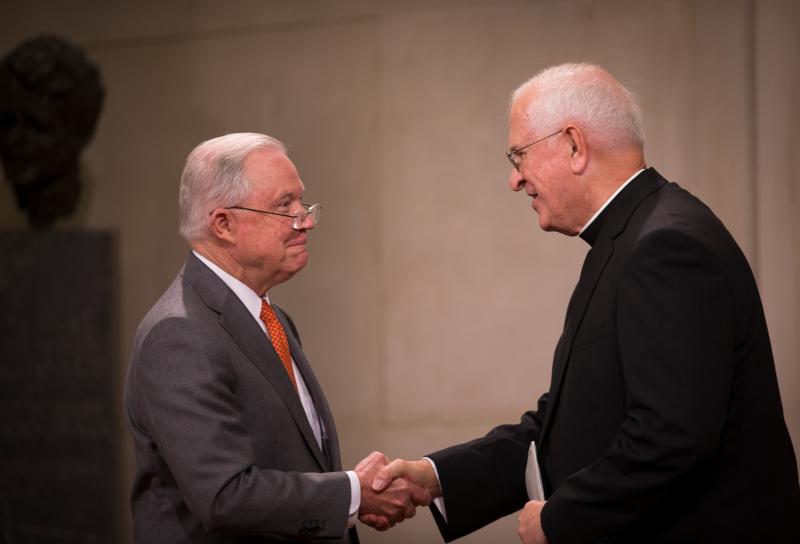 WASHINGTON (CNS) — Attorney General Jeff Sessions spoke about ongoing threats to religious freedom and what can be done to halt them at a conference held July 30 at the Department of Justice.

“Let’s be frank. A dangerous movement is now challenging and eroding our great devotion to religious freedom. It must be confronted, both intellectually and politically, and defeated,” he said.

“In recent years, the cultural climate in this country has become less hospitable to people of faith. Americans from a wide variety of backgrounds are concerned about what this changing culture means for the future of religious liberty.”

While Sessions provided no vision of what the world might look like if the culture continued to change, he said that “I believe that this unease among the American people is one reason President Donald Trump was elected.”

That election, Sessions said, will aid the cause of religious liberty.

“The last election gives us a rare opportunity to arrest these trends, and this president and this Department of Justice are determined to advance our magnificent heritage of freedom of religion.”

He also outlined what he thought was important to religious liberty.

“The government has no business telling the Little Sisters of the Poor that they need to buy an insurance policy that violates their religious beliefs,” he said. “Free exercise means both the right to act and the right to abstain from acting.”

Religious freedom, he said, is more than just the freedom to worship. “The Constitution’s protections don’t end at the parish parking lot.”

Sessions also explained several kinds of actions the DOJ is taking as it “actively seeks to protect people of faith.”

“Since January 17 we’ve obtained 11 indictments and seven convictions in cases about arson or other attacks or threats on houses of worship,” and he also said that the DOJ was working to prosecute in cases involving threats made against people because of their religion.

Sessions also said that the DOJ was filing civil actions in courts when religious groups are discriminated against in zoning laws.

He said that the DOJ filed suit in June against a town in New Jersey that had been using zoning laws to prevent a group of Orthodox Jews from buying land to build a synagogue for eight years and had done the same for a group of Hindus in Maryland in a similar situation.

“We’ll keep going to court, and I believe we’re going to keep winning,” he said.

Sessions also said that he aimed to stay in touch with religious groups to make sure their concerns were being heard.

“We’re going to remain in touch with religious groups all over America to ensure that their rights are being protected,” he said.

He also announced formation of a Religious Liberty Task Force, which he said would help the DOJ implement fully the guidance it issued last October to all administrative agencies and executive departments regarding religious liberty protections in federal law. The guidance came the same day President Donald Trump acted to lift the contraceptive mandate from religious employers who are morally opposed to providing insurance coverage for contraceptives.

Sessions also said why fighting for religious liberty is important on a human level.

“There can be no doubt that we are stronger as a nation because of the contributions of religious people. People in Washington have no idea how much our religious communities are with people in the situations — birth, death, marriage, divorce — that most greatly affect human beings.”

NEXT: Crimes, oppression against religion ‘span width of our world,’ says Pence