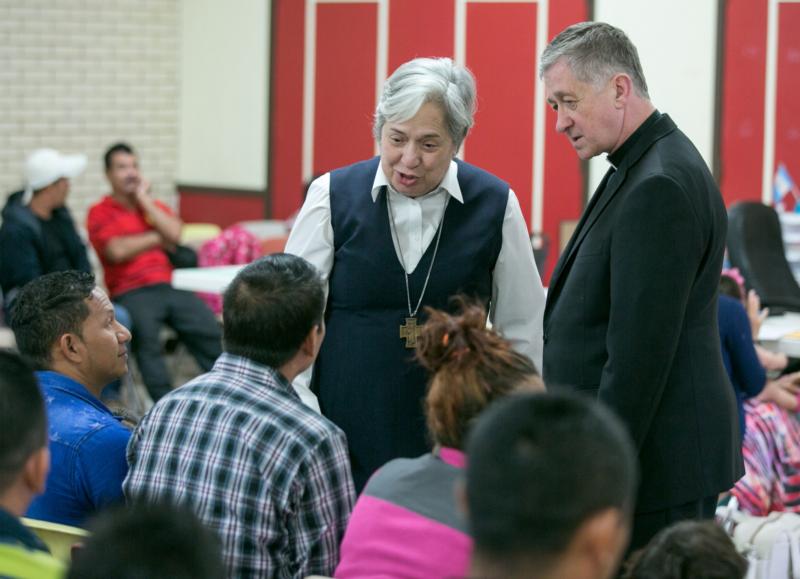 MCALLEN, Texas (CNS) — It’s been featured in fundraisers at the Vatican and on news shows. This summer, it’s been visited by Kerry Kennedy, Robert and Ethel Kennedy’s daughter, and TV celebrity Gayle King.

The U.S. bishops recently made it the first stop on a high-profile visit to the border.

But the real celebrities who walk through its doors are the poor, unkempt, tired, thirsty, hungry women, children and men who run to it shortly after being released by immigration authorities — a modern Statue of Liberty come to life.

Its official name is the Catholic Charities of the Rio Grande Valley’s Humanitarian Respite Center. From the outside, the humble cream-colored building with Mission-revival style touches, calls little attention to passers-by. But inside its walls, volunteers give a warm welcome, including unexpected smiles and applause, along with clothes and warm food, to recent arrivals to the U.S. as they walk through its doors.

It was Sister Norma Pimentel, a member of the Missionaries of Jesus and executive director of Catholic Charities of the Rio Grande Valley, whose idea it was to create this place to “welcome the stranger” and who came in the form of a migrant to the border town of McAllen.

She often posts pictures on Twitter of babies and moms, teens and fathers and other children who walk through the center’s doors. She calls them “miracles.” She tells their stories. One was about a woman who fled Guatemala after her 16-year-old son was kidnapped and killed by gangs. She photographed the woman with her remaining son as they passed through the center.

“The fact is that they are human persons, they are people, they need attention, they need care,” Sister Norma, as she’s popularly known, said in a July 1 interview with Catholic News Service.

In 2014, Sister Norma set out to provide some of that care, as she saw an influx of immigrants arriving in Texas’ Rio Grande Valley, in the Brownsville Diocese. With local volunteers, she began a makeshift operation to help the migrants obtain clothes and food. Out of a property that belonged to the local Sacred Heart Church, they began clothing and feeding the newcomers.

Her mission now has a more permanent home on Beaumont Avenue in McAllen, where migrants, many seeking asylum, have access to a shower after a harrowing trip, a clean change of clothes, a quick medical look, if they need it, a warm meal and a snack for the road.

On the trip by a group of U.S. bishops in early July, Sister Norma said she wanted the prelates to talk with the families, to see them and hear their stories so they could talk about them to others and speak on their behalf. Though there’s a sense of antagonism toward immigrants around the country, she’s eager to showcase at the respite center a side of the U.S. that the newscasts and TV stories often leave out and that immigrants may not be aware of.

“They (the immigrants who pass through) go in gratitude of the fact that we, here in the United States, are people that have a heart, that care and that are able to participate by serving them, by bringing them soup, by hearing their story, by showing them they matter,” she said.

Some, like volunteer Lisa Foley, of Reno, Nevada, who was at the center July 1, cared enough to spend her summer vacation days with them.

“I came here to help. I can’t sit and watch it on the news any longer,” said Foley, a social worker by profession, showing in her hand shoelaces and rubber bands she was handing the women who had them taken away while being processed by immigration authorities. “It’s the least I can do.”

Through the center, Sister Norma also wants others to see migrants as children and mothers, fathers and brothers, many of them fleeing danger. The mothers and fathers who pass through “all tell you that, in one way or another, they’re fleeing, they fear for the lives of their children.”

“They know that if they stay (in their home countries), their life is in danger and their child may be kidnapped, or taken by a gang,” she said. “Their stories are so similar and they all flee because they are frightened for their lives.”

The center’s mission of compassion has been noticed at the highest levels of the church. On the occasion of his elevation to cardinal, Chicago Archbishop Blase J. Cupich, through his role as chancellor of Catholic Extension, organized a benefit dinner in 2016 at the Vatican that raised $100,000 and donated it to the respite center.

The flow of migrants, which ebbs and sometimes overflows, has sent Sister Norma on a mission to find more space, and funds, to continue the work of helping migrants. Catholic Charities of the Rio Grande Valley has set up a GoFundMe page at www.gofundme.com/humanitarian-respite-center for those who want to help.

Sister Norma hopes the center will continue to be a place where the poor and hungry will find more than just material help, but will continue to provide newcomers an initial dose of compassion that exists in the United States and that many of the migrants who have passed through have experienced.

“They’re hopeful and they have faith in their God that here in the United States, there will be people who understand and will help them make sure they’re safe,” she said.

PREVIOUS: Archbishop Chaput among delegates tapped by pope for synod