Worry over immigration on minds of Hispanic charismatic Catholics 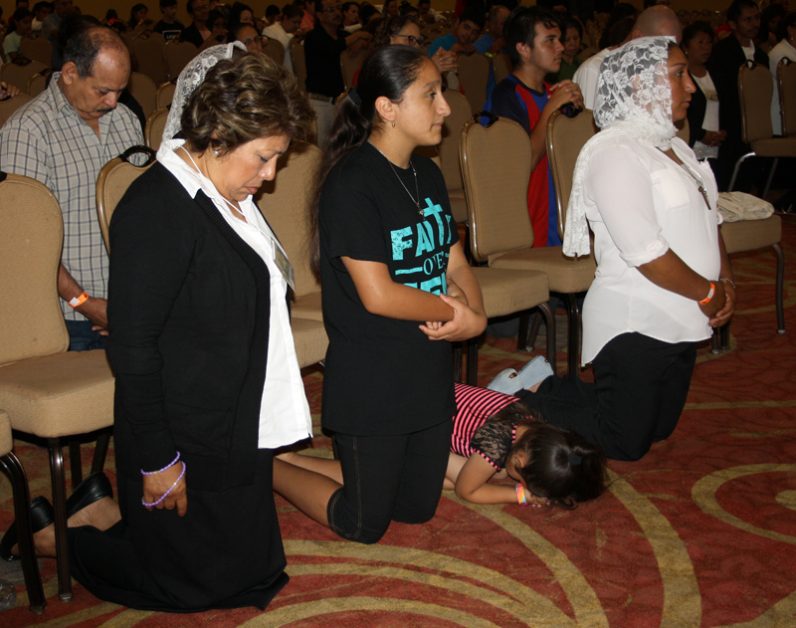 A girl prays alongside other attendees during the 14th annual Hispanic Charismatic Congress in South Sioux City, Neb. “Mary, the Ark of the New Covenant” was the theme of the 14th annual Hispanic Charismatic Congress of the Diocese of Sioux City, Iowa. Bishop R. Walker Nickless of Sioux City was the was the main celebrant of the opening Mass for the July 14-15 gathering. (CNS photo/Joanne Fox, The Catholic Globe)

SOUTH SIOUX CITY, Neb. (CNS) — Although Adrian Paz of Denison, Iowa, was pleased that attendance had increased at this year’s Hispanic charismatic congress, real-world issues may have kept some away.

“Word was there might be ICE agents coming today,” he said, referring to the U.S. Immigration and Customs Enforcement, whose agents have been known to arrest immigrants without documents at their workplace and at events.

“That may have scared some people away,” admitted Paz, one of the organizers of the event.

The 14th annual Hispanic Charismatic Congress for the Diocese of Sioux City, Iowa, was held July 14-15 at a conference center in South Sioux City, Nebraska, just across the Missouri River.

The theme was “Mary, the Ark of the New Covenant.” Bishop R. Walker Nickless of Sioux City was the principal celebrant of the opening Mass July 14.

In his remarks, Bishop Nickless expressed similar sentiments of concern.

“I know many of you are frightened and scared about many things that are happening in our country today,” he said in English, while Father Jeremy Wind of Sioux City’s Cathedral of the Epiphany interpreted in Spanish.

“Maybe you and/or some or your relatives have been hurt badly,” the bishop continued. “Please remember, the church always has room for you and you are always welcomed and appreciated.”

Then, he confessed, “That’s all the Spanish, I know.”

Once the laughter subsided, Bishop Nickless, welcomed all to the Archdiocese of Omaha, Nebraska, and expressed his thanks to Omaha Archbishop George J. Lucas “for allowing us to host this wonderful event in his archdiocese.”

“But most of all,” he added, while Father Wind continued to interpret, “thank you for your beautiful expression of faith and my hope is you grow closer to Jesus today.”

In his homily in Spanish, Father Wind explained he spoke to the readings, in which Jesus assured the faithful “to not be afraid.”

“I talked about how Jesus asked, ‘Are not two sparrows sold for a small coin?’ then answered, ‘Yet not one of them falls to the ground without your Father’s knowledge,'” he said. “I told them they were also worthwhile.”

Father Wind received a great deal of laughter with the Scripture reference from Matthew’s Gospel, “Even all the hairs of your head are counted.”

“I told them God might have some trouble counting the hairs on my head,” said the priest, who doesn’t sport a full head of hair.

Concelebrating on the altar was Father Mario Castaneda, who was ordained for the Diocese of Stockton, California, in 1995 and has been serving in the Diocese of Palm Beach, Florida, since 2002.

“I’m going to talk later on the Immaculate Conception of Our Lady and how Mary was conceived without sin,” said the Colombian-born priest. “My hope is that people will strive to be like the Mother of God, as the church calls us to be pure and holy.”

Father Castaneda, currently the pastor at St. John Fisher Parish in West Palm Beach, Florida, is the spiritual director of a preaching ministry called Tu Palabra Hoy (Your Word Today). He was at the congress to share insights on Pope Francis’ apostolic exhortation on the call to holiness in today’s world, “Gaudete et Exsultate” (“Rejoice and Be Glad”), released in April 2018.

“Pope Francis calls us in this exhortation to pursue sainthood,” Father Castaneda noted. “We do that through God’s grace, and through Mary, which is the emphasis of this congress.”

Fernando Gomez, an Ecuadorian Christian singer-songwriter based in Miami, was in attendance with his wife, Miriam.

“I am blessed to share my ministry with these people,” he said, as he looked to the heavens and thanked God for the gift of music.

Both Fernando and Miriam left their jobs and founded the Catholic Ministry of Evangelization Christian Varieties.

“An event like this is so important because it allows people to grow in their faith,” Miriam told The Catholic Globe, newspaper of the Diocese of Sioux City.

“We preach at many conferences,” she continued, “and our belief is: It doesn’t matter if there are 15,000 or 10 people. If just one person receives Jesus Christ in their soul, then, that’s good enough for us.”

Father Ubaldo Roque Huerta, a priest of the Diocese of Winona, Minnesota, was another featured speaker.

“I am going to talk about increasing our relationship with Mary through Jesus,” he said.

The priest currently is parochial vicar at St. Mary Parish in Worthington, Minnesota, and assists with Hispanic ministry.

“It’s very important for people to understand the connection Our Lady has with her son,” he said. “The theme of this event is Mary, the Ark of the New Covenant, and she is the one who is our new alliance with Jesus.”

PREVIOUS: 1,300 deacons and wives praised for their work of caring for others