1,300 deacons and wives praised for their work of caring for others 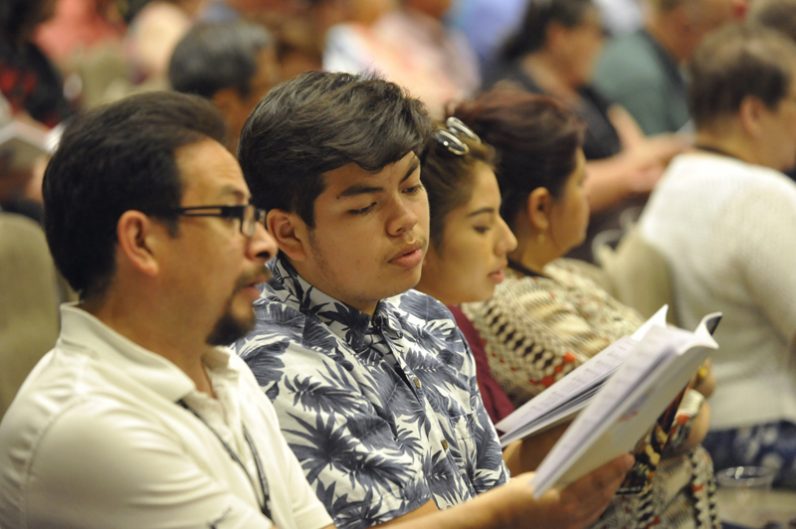 Attendees of the 2018 National Diaconate Congress are seen July 22 in New Orleans. Nearly 3,000 people attended the July 22-26 gathering, including 1,300 permanent deacons, their wives and children. There are 18,500 permanent deacons in the U.S., more than half the worldwide total. (CNS photo/Peter Finney Jr., Clarion Herald)

NEW ORLEANS (CNS) — The core vocational work of permanent deacons is to evangelize and care for others, not to perform office duties, the apostolic nuncio to the United States said July 22 to more than 1,300 deacons attending the 2018 National Diaconate Congress in New Orleans.

In his post-Communion remarks at the opening Mass of the five-day gathering, Archbishop Christophe Pierre noted that St. John Paul II had declared that the “service of diaconal ministry finds its identity in evangelization.”

“Not (in) doing office work,” but in “evangelizing,” Archbishop Pierre said.

The opening Mass was celebrated in a ballroom holding 2,200 seats. Of the 18,500 permanent deacons in the U.S. — who represent more than half the worldwide total — 1,300 permanent deacons were attending the July 22-26 conference, along with their wives and children, for a record total of 2,800 attendees.

“I’m quite amazed to see so many deacons and wives of deacons,” the nuncio said, as his message from the altar was displayed to the far reaches of the room on two oversized video screens.

Recalling the 50th anniversary of the restoration of the permanent diaconate in the Latin-rite church by Blessed Paul VI through his 1968 “motu proprio” (on his own initiative) titled “Sacrum Diaconatus Ordinem,” Archbishop Pierre lauded the permanent deacons for their humble service of charity, proclaiming the word and leading the faith community in prayer.

He echoed Pope Francis’ remarks that defined permanent deacons as “pioneers of the new civilization of love.” 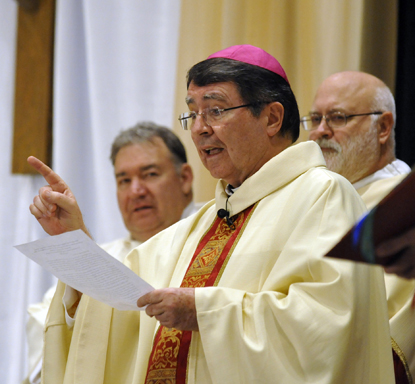 Archbishop Christophe Pierre, apostolic nuncio to the United States, speaks July 22 at the 2018 National Diaconate Congress in New Orleans. Archbishop Pierre praised the work of the 18,500 permanent deacons in the U.S. He urged them to continue their work of evangelization and reaching out to those on the margins of society. (CNS photo/Peter Finney Jr., Clarion Herald)

“This is Christ’s call, isn’t it?” Archbishop Pierre asked. “Don’t forget, the job is Jesus’. Otherwise, it is your job, your work, right? No. The work is Christ’s. It is one thing to serve at the altar. It is another to be an evangelizing force in the world.

“In my travels throughout the United States, I’ve seen how permanent deacons continue to serve through their hard work and generous service. Deacons have been able co-workers with their bishops, priests and laity in many dimensions of ecclesial life, especially the apostolic works.”

Archbishop Pierre praised the deacons for their works, especially in hospital ministry. He also said the church as a whole must do more to prepare couples for marriage and to enrich the marriages of those already married.

“We should invest more in marriage preparation,” he said.

Archbishop Pierre offered the personal greetings of Pope Francis and said the permanent diaconate has “flourished” in the last half-century, “particularly here in the United States, where nearly 18,500 permanent deacons carry out their threefold diaconal ‘munera’ of word, charity and liturgy.”

He asked the deacons and their wives to reflect on the words of dismissal at Mass, often spoken by the deacon — “Go forth, the Mass is ended”; “Go and announce the Gospel of the Lord”; “Go in peace, glorifying the Lord by your life”; “Go in peace.”

“Share the peace of Christ with all those you meet — your family first — your friends and even your enemies,” Archbishop Pierre said. “Be instruments of the gift of peace. Thank you and thanks be to God for you and your service to the church and for all those who have supported you.”

In his homily at the opening Mass, New Orleans Archbishop Gregory M. Aymond stressed the deacon’s role in being the “conscience” of the church in matters of service to the poor and disenfranchised.

“All Christians are called to charity by their baptism, but deacons lead us as a church in the works of charity,” he said. “We look to you in some ways as the conscience of the church. We ask you to find those who are in need and to invite us to serve them. And when we forget them or fail to be people of charity as a church, we ask you to be our conscience and to call us back to what God asks.” 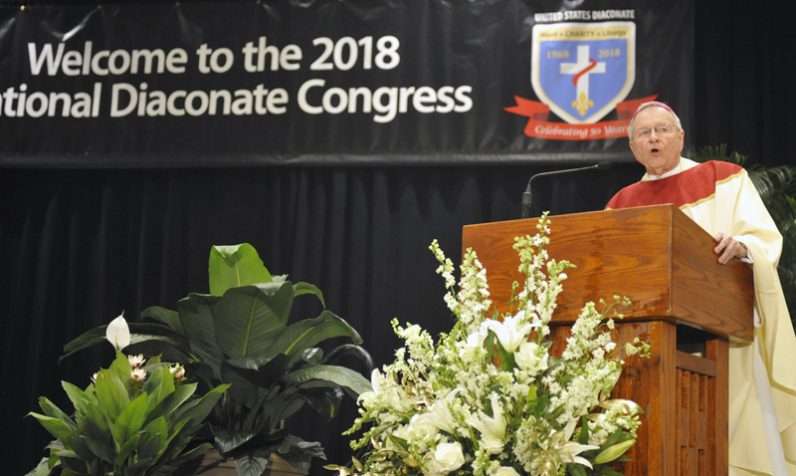 New Orleans Archbishop Gregory M. Aymond delivers the homily July 22 at the opening Mass of the 2018 National Diaconate Congress in New Orleans. The archbishop called permanent deacons the “conscience” of the church, reminding them of the need to reach out those who are poor or disenfranchised. (CNS photo/Peter Finney Jr., Clarion Herald)

NEXT: Worry over immigration on minds of Hispanic charismatic Catholics