Youngest bishop to head diocese in North America ‘a gift’ to U.S. church 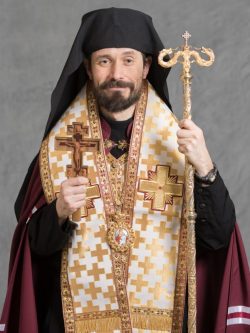 Bishop Milan Lach became the fifth bishop of the Byzantine Ruthenian Eparchy of Parma, Ohio, during a Divine Liturgy of enthronement at the Cathedral of St. John the Baptist in Parma. (CNS photo/Reen Nemeth, Horizons)

PARMA, Ohio (CNS) — At 44, Bishop Milan Lach is the fifth bishop of the Byzantine Ruthenian Eparchy of Parma and the youngest bishop to head a diocese in North America.

He also is the third-youngest Eastern Catholic bishop to head a diocese and the first foreign-born bishop for an eparchy that comprises 12 states in the Midwest.

A native of Slovakia, Bishop Lach is among about a dozen bishops from other countries that Pope Francis has appointed to the United States.

He was enthroned recently as Parma’s bishop during a Divine Liturgy at the Cathedral of St. John the Baptist, after having served as its apostolic administrator since June 24, 2017. He succeeds Bishop John M. Kudrick, who resigned in May 2016.

Bishop Lach, who is a Jesuit, has visited almost every parish and mission of the eparchy since his arrival to the United States last summer and has established pastoral priorities that include youth, evangelization, and parish reorganization.

Byzantine Catholic Bishop Milan Chautur of Kosice, Slovakia, who was present for the June 30 enthronement, said his “wish for all the faithful” in the United States is that they receive Bishop Lach “as a gift from the Slovak church.”

“After the fall of communism, we immediately turned to the Greek Catholic Church in America for material needs, to build churches again. We were liquidated for 18 years (under communism),” the 60-year-old prelate told Horizons, newspaper of the Byzantine Catholic Eparchy of Parma.

But now, with the Slovak Eastern Catholic Church strongly re-established, there may be an opportunity to return the favor, he said.

“We sense that, compared with us, there is a certain crisis of vocations and in the spiritual life (in the United States),” he said. “So, just as we received material gifts after the fall of communism, now we can repay with spiritual gifts.”

Bishop Chautur, who is a Redemptorist, said he attended the enthronement because he realized the importance of maintaining a connection between the Byzantine Catholic churches in the United States and Europe.

“There are people who came (to the United States) 10 years ago or 100 years ago, and they still carry within them the Gospel they received from their forefathers,” he said.

At the same time, he acknowledged the mission of the Byzantine Catholic Church in the U.S. is to minister and to be open to the diversity in American society.

“It is important to understand the roots (of the church), but it has to be open to everybody, all races, everyone is welcome,” he said. “The church has to fulfill its missionary vocation.”

The early Christians “didn’t stay in the ethnic ghetto, but they went to the whole world,” he said. “It is good to understand where we come from, but to spring up new offshoots. This was the foundation we have received, and now we need to build a new church, with new growth, open to everyone.”

Bishop Chautur, who ordained Bishop Lach a deacon in 2000 and a priest a year later, was one of three European bishops at the enthronement.

Archbishop Christophe Pierre, apostolic nuncio to the United States, presided at the enthronement, attended by 400 people. The liturgy also was livestreamed. He read the letter of the pope appointing Bishop Lach to Parma, as well as a message from the prefect of the Vatican Congregation for Eastern Churches, Cardinal Leonardo Sandri.

Byzantine Archbishop William C. Skurla, metropolitan archbishop of Pittsburgh, was the main celebrant and homilist. He urged Bishop Lach in his homily to use his “energy to enliven the spiritual life of the church and protect it from the challenges of secularism and materialism which undermine the faith of our people.”

At the end of liturgy, Bishop Sasik presented Bishop Lach with an icon of Blessed Theodore Romzha, the Ruthenian bishop of Mukachevo who was martyred by the communists in the 20th century.

“I would like to express to the Holy Father my gratitude for his confidence in me as bishop of Parma. I will try my best to be the successor of the Apostles, to govern and serve,” Bishop Lach said at the end of the liturgy.

“We are invited to be witnesses to the Gospel,” he said. “Our church must focus on evangelization, have a spirit of openness and prayer.”

His priorities include the “liturgy, the sacraments, especially the Eucharist and confession,” which are “part of our Eastern theology,” he said. He underlined the need to offer more catechesis and faith formation to the faithful, and to nurture priestly vocations.

Due to the current priest shortage in the eparchy, Bishop Lach has been inviting priests from Slovakia to come and minister. Two Slovak priests are currently undergoing the visa application process; one of them is expected to arrive this fall.

Bishop Lach said the recruitment of Slovak priests is a short-term measure to try to meet the urgent need for priests: Two priests retired this past year and at least another four are expected to retire in the next 12 months.

He said he hopes prospective vocations to the priesthood will be nurtured and there will be American candidates for seminary soon. The eparchy currently has two men in seminary formation and a third who will be ordained a subdeacon in August.

The bishop also said he will consider reorganizing parishes to shift already limited resources, both pastoral and financial, to support the new missions and prayer communities that have developed in the western part of the eparchy.

“Perhaps we will have fewer parishes, but they will be more open (to welcoming others) and more vibrant,” he said.

He said there is an urgent need to get the eparchy in stronger financial shape, which includes reducing costs across the board, and he has already reached out to the neighboring Latin-rite Catholic dioceses of Cleveland and Youngstown, Ohio, to share resources.

In an interview with Horizons, Bishop Perez said it has been a “a great blessing” to share resources with the eparchy and to get to know Bishop Lach, whom he described as a “wonderful guy, young guy, very spiritual, very pastoral.”

“It’s a great celebration for all of us, Eastern rite and Latin rite,” he said of Bishop Lach’s enthronement. “We all gathered together in an incredible liturgy and a great moment of joy for the church.”

Ieraci is editor of Horizons, newspaper of the Byzantine Catholic Eparchy of Parma.