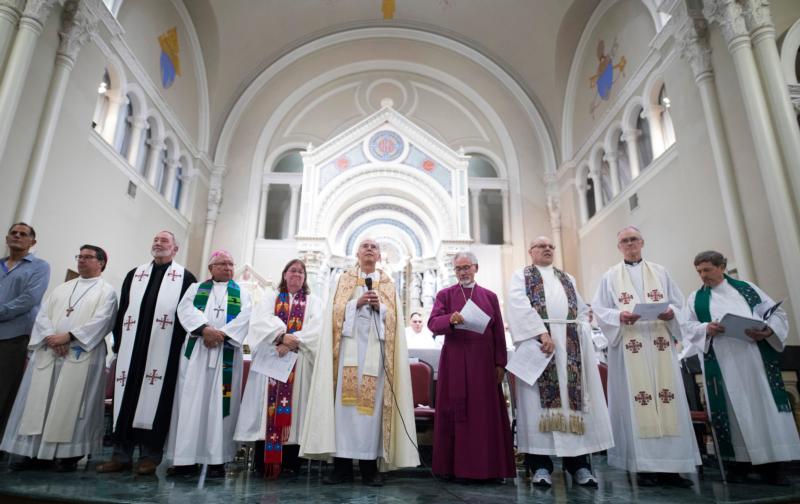 WASHINGTON (CNS) — Five Catholic bishops from the U.S. and a representative from a Vatican department on migrants and refugees walked in a procession with other faith leaders July 20 in the border city of El Paso, Texas, showing their support for immigrants and continuing the church’s call for the urgent reunification of migrant families separated at the border.

Bishop Mark J. Seitz of El Paso held one corner of a banner that said, “Families belong together and free,” as Bishop Oscar Cantu and retired Bishop Ricardo Ramirez of Las Cruces, New Mexico, supported the banner on the opposite side while they processed with others toward the city’s St. Patrick’s Cathedral for an interfaith service in support of migrants.

Bishop Edward J. Burns and Auxiliary Bishop Greg Kelly of Dallas as well as Father Robert Stark, of the Migrants and Refugee Section of the Vatican Dicastery for Promoting Integral Human Development, also joined what was billed as a “weekend of solidarity” at the Diocese of El Paso, which held the following day a variety of informational sessions, activities and workshops focusing on the Catholic Church’s teaching on migrants.

The bishops and Father Stark also visited a detention center nearby and celebrated Mass there with adult migrants, including some men and women who had been separated from their children.

“At the Mass in the detention center, I was moved by the tears of the men and women recognizing the love of God ‘in the breaking of the bread’ and the desire to be with their families,” said Bishop Burns via Twitter July 21. “The procession in the evening was a wonderful witness to the community.”

He also posted on Twitter that he and other bishops visited a shelter where families were reunited and said he “heard some heart-wrenching stories and some heartwarming stories. All of them asked for prayers.”

In a July 24 message to Catholic News Service via Twitter, Bishop Seitz said he had pointed out to the men and women at the detention center the light passing through the high windows at the facility.

“Just that easily the Lord can pass through and be with them. No walls can keep him out. There were many tears,” he said.

A story published July 21 by the Albuquerque Journal newspaper of New Mexico said about 700 attended the July 20 interfaith service and some 200 showed up for the workshops the following day.

“We need to show the rest of the country how being generous doesn’t break us, it makes us greater,” said Bishop Cantu in a video accompanying the Albuquerque Journal’s story about the march.

A story about the same events published July 22 by the El Paso Times newspaper reported that Father Stark encouraged those present to advocate and defend Catholic teaching that says people have the right to migrate and to seek refuge.

“We are called to defend these basic rights,” he said, according to the El Paso Times report. “It’s immoral to criminalize people seeking refuge and asylum and separate their families.”

NEXT: Fall in France breaks Indiana teen’s back, but not his or family’s faith