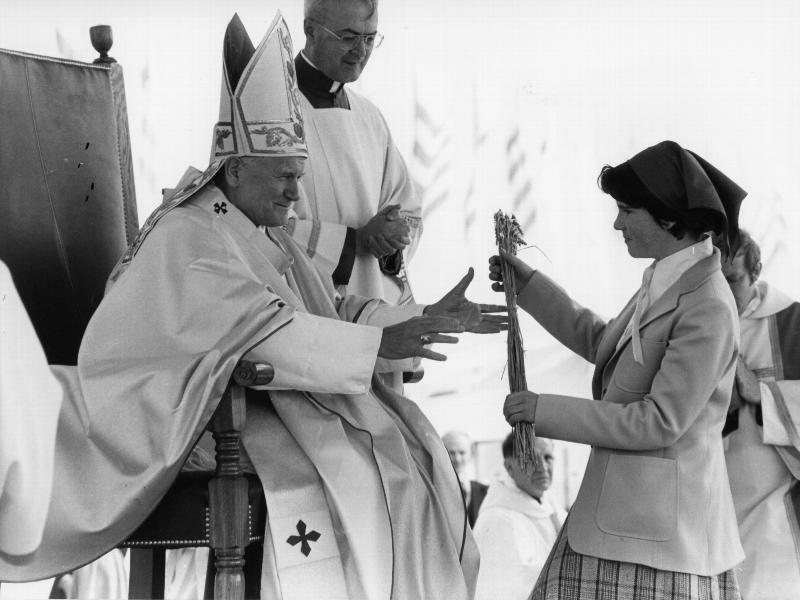 Pope John Paul II accepts a gift during Mass in 1979 at Phoenix Park in Dublin. Pope Francis will visit Dublin and Knock, Ireland, Aug. 25-26, mainly for the World Meeting of Families. But he also will meet Irish government leaders and is expected to meet with survivors of sexual abuse. (CNS photo/Arturo Mari)

VATICAN CITY (CNS) — The last time a pope visited Ireland, the Constitution prohibited divorce, gay marriages were unthinkable, abortion was illegal and physical and sexual abuse at the hands of nuns and priests was a carefully hidden secret.

That has all changed in the almost four decades since St. John Paul II visited the country in 1979.

Pope Francis will visit Dublin and Knock Aug. 25-26, mainly for the World Meeting of Families. But he also will meet Irish government leaders and is expected to meet with survivors of abuse.

“Ireland is a country that has suffered tremendously, and suffered at the hands of the church, also — so many cases of abuse: sexual abuse, physical abuse, emotional abuse,” said Cardinal Kevin J. Farrell, the Irish-born prefect of the Dicastery for Laity, the Family and Life, which helped organize the World Meeting of Families.

Revelations of the extent of the abuse and the long-delayed response of church officials have devastated Irish Catholics, sent church attendance plummeting and contributed strongly to the waning influence of the Irish hierarchy in public discourse.

“Ireland is certainly a different country today” from what St. John Paul experienced in the late 1970s, Cardinal Farrell told Catholic News Service. “The church was a powerful force in Ireland — for good or for bad, it’s not my position to judge — but, certainly, that is not the Ireland of today.”

The people of Ireland and the Catholic Church in Ireland must find ways to work together and support each other in dealing with the new, multicultural, pluralistic reality of the country, he said.

“Pope Francis has tried to teach us that over the last five years,” he said. “You’ve got to remember: People aren’t the way we would like them to be; they are the way they are. And we have to bring the message of God and the word of God to people where they are, in this place, at this particular moment.

The changes in society — not just in Ireland — and in the church also have dictated changes in the World Meeting of Families and its “pastoral congresses,” which since 1994 have gathered an international group of bishops, theologians, members of Catholic movements and Catholic families to strengthen their work and witness about the Catholic vision of marriage and family life.

The Dublin congress Aug. 22-24 will continue that core mission but has been designed to be more attractive to and welcoming of all families, including those who find some of the church’s teachings challenging, he said. Participants can attend workshops ranging from cooking demonstrations to discussions about outreach to migrant and refugee families; and from fostering family prayer to welcoming LGBT people and their families.

“As Pope Francis says, we have to adjust to the reality with which we find ourselves,” Cardinal Farrell said. “Catholics today are not so expressive of their Catholic identity, of their married identity, but I believe that they are seeking.”

The entire World Meeting of Families 2018 is focused on Pope Francis’ 2016 letter, “Amoris Laetitia” (“The Joy of Love”), which offered his reflections on modern family life.

Cardinal Farrell said he hoped the meeting and the pope’s visit would help spark “a renewed consciousness of the beauty of marriage and of the beauty of family” and, even more, that “people would become enthused about helping each other.”

In societies where people are increasingly isolated from each other and live far from the rest of their extended families, he said, the traditional supports for a strong, healthy marriage and family are more difficult to find.

Pope Francis made no changes to Catholic doctrine in “Amoris Laetitia,” the cardinal said. But there is “a pastoral change, a way of dealing with married couples” starting from the “practical reality” of their own lives.

“It’s about the practicality of loving and caring and living marriage according to the word of God,” he said. “People are searching for this.”

“We understand that the world has changed,” the cardinal said. “We don’t judge anybody, but we believe in what we believe as Catholics” and want to help those seeking assistance.

Cardinal Farrell attracted some strong reaction in early July after he said in an interview that priests are not the best people to prepare and accompany couples for married life. “They have no credibility; they have never lived the experience,” he was quoted as saying.

“Priests have an important role to play, obviously,” he told CNS July 24. “That’s a foregone conclusion; we are talking about a sacrament that people are preparing to receive.”

“Marriage preparation should be done under the direction of a priest,” he said, but always with couples who are trained and “can connect with young people today.”

“Young couples need support,” he said. And that ministry belongs predominantly to other married couples because the challenges usually are not theological or moral, but are questions related to “the practical, everyday reality of living life with a person.”

“We have to accompany people where they are in their lives, not where we would hope they were,” Cardinal Farrell said. And for that, “we need couples. We need laypeople, people who are experienced, people who have walked the walk.”

PREVIOUS: ‘Bishop of the Wheelchair’ seen as a good shepherd for ex-Khmer Rouge

NEXT: Chaldean synod to address church’s future in Iraq, among diaspora