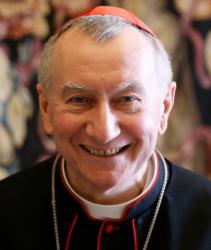 Cardinal Pietro Parolin, Vatican secretary of state, is pictured in a May 11 photo at the Vatican. (CNS photo/Paul Haring)

VATICAN CITY (CNS) — World War I and its aftermath changed the map of Europe, but also dismantled the notion of the “state church” in a way that forced the Catholic Church to discover again the authentic meaning of mission, said Cardinal Pietro Parolin.

After the war, Pope Benedict XV “was prompt in indicating how the missionary world must change paths, abandoning the colonial ideology in which it had been lulled and promoting autonomy, independence and ecclesial self-governance in all the areas outside Europe,” said the Vatican secretary of state.

Speaking at a conference July 12 anticipating the 100th anniversary of the end of World War I, Cardinal Parolin looked at the wide-ranging impact of the war and its aftermath on the political map of Europe, and how that affected the fates of peoples in the Middle East and in the countries of what would become the Soviet Union.

But he also spoke about Pope Benedict’s 1919 apostolic letter “Maximum Illud” on the church’s missionary activity. In conjunction with document’s centenary, Pope Francis has asked all Catholics to celebrate a special “missionary month” in October 2019.

Announcing the special commemoration, Pope Francis had said, “In 1919, in the wake of a tragic global conflict that he himself called a ‘useless slaughter,’ the pope recognized the need for a more evangelical approach to missionary work in the world, so that it would be purified of any colonial overtones and kept far away from the nationalistic and expansionistic aims that had proved so disastrous.”

“May the approaching centenary of that letter serve as an incentive to combat the recurring temptation lurking beneath every form of ecclesial introversion, self-referential retreat into comfort zones, pastoral pessimism and sterile nostalgia for the past,” Pope Francis said. “Instead, may we be open to the joyful newness of the Gospel.”

World War I marked the end of the “state church,” which was particularly strong in the Austro-Hungarian Empire, Cardinal Parolin said in his lecture in the northern Italian city of Aquileia. The government had power in the appointment of bishops and controlled the seminaries and a variety of religious institutions, all of which fed into a mentality that emphasized national belonging over the universality of the Catholic faith, the cardinal said.

“Maximum Illud,” he said, was “the manifesto of a missionary and political revolution whose importance still has not been recognized as it deserves.”

“In the encyclical,” the cardinal said, “the pope ordered European missionaries to free themselves of nationalism, of the idea of European superiority over the peoples then seen as subordinate, to promote local languages rather than the language of the conquerors, (and) to train and to value indigenous clergy so that ‘one day they will be able to take up the spiritual leadership of their people.'”

Pope Benedict knew it would take some time to change mentalities and ensure the proper training of local clergy in view of their leadership of their communities, Cardinal Parolin said. But he also knew that the church had to act both out of respect for the God-given dignity of all peoples and cultures as well as because “the Catholic Church also would have been shaken by the imminent end of colonial structures.”

Pope Pius XI continued the path dictated by Pope Benedict, he said, and in the 1930s nominated the first local Chinese, Japanese, Vietnamese and African bishops.

NEXT: Ex-chancellor of Santiago archdiocese arrested on abuse charges