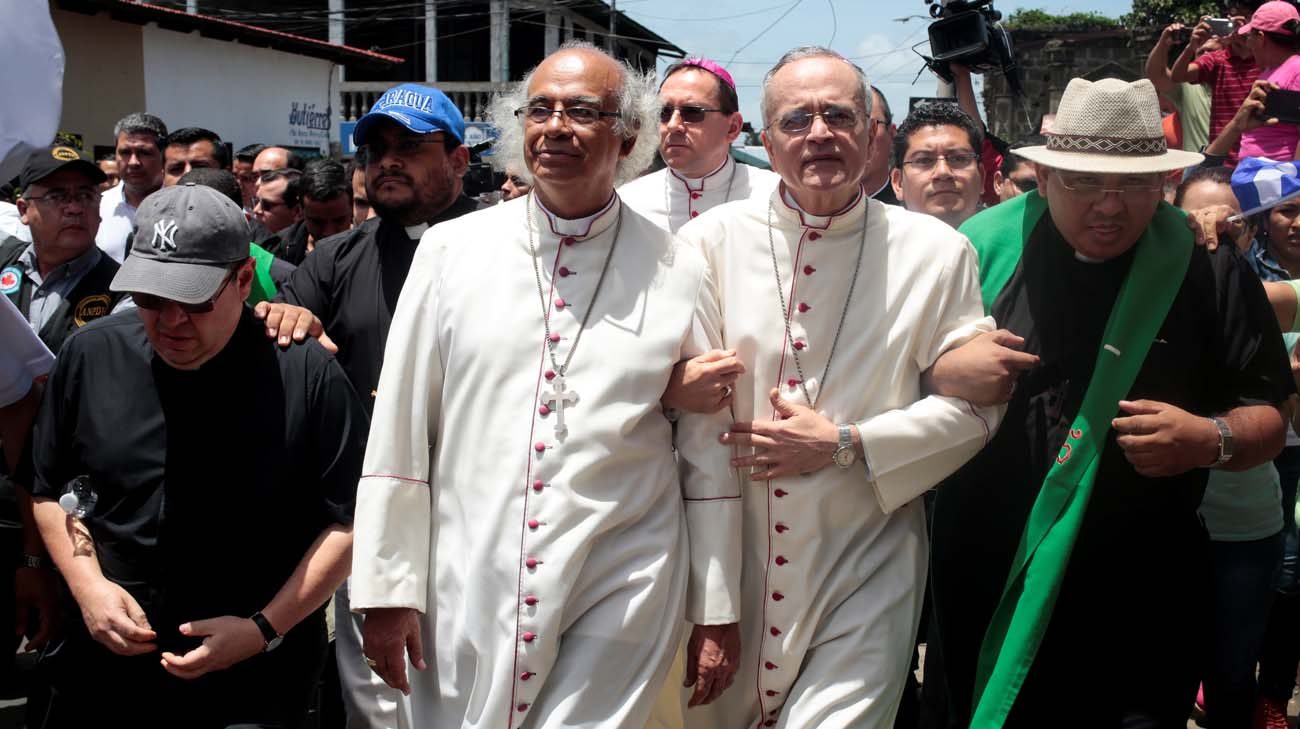 COPAN, Honduras (CNS) — Nicaraguan bishops and clergy were attacked by armed groups aligned with the government July 9 as violence in the Central American country escalated and affected the Catholic Church, which has provided humanitarian assistance in its parishes and has tried to diffuse a worsening political crisis through dialogue.

Cardinal Leopoldo Brenes Solorzano of Managua and his auxiliary, Bishop Silvio Jose Baez, and Archbishop Waldemar Stanislaw Sommertag, the apostolic nuncio, were among clergy from Managua pummeled as they attempted to protect St. Sebastian Basilica in the city of Diriamba from an incursion by a pro-government mob. Bishop Baez and at least one other priest were injured. Journalists also were attacked and had cameras and other equipment stolen.

The bishops and clergy also tried to free anti-government protesters inside the church as masked individuals and mobs outside chanted “murderers” at the prelates. Pro-government media, meanwhile, accused the church of allowing weapons to be stored inside its properties.

“I was injured, punched in the stomach, they took my episcopal symbols away from me, and verbally attacked me,” Bishop Baez tweeted, along with a picture of a gash on his arm and blood-stained habit. “I’m OK, thank God. The basilica is free and so are those who were inside.”

“We have felt brutal force against our priests. We had gone to (the) parish to console our priests, to accompany them in this suffering and were attacked,” he said.

The attack on the bishops came as Nicaraguan President Daniel Ortega sent police and paramilitaries to counter protesters calling for his ouster.

The protests — originally triggered over reforms to the social security system in April — have claimed at least 300 lives. Seventeen people were killed July 7 and 8 during repressions by police and paramilitaries in the cities of Jinotepe, Diriamba and Matagalpa, according to Amnesty International.

The church delegation traveled to Diriamba to “show solidarity” with priests in the area after a massacre, Father Victor Rivas, executive secretary of the Nicaraguan bishops’ conference, told Catholic News Service.

Churches in Nicaragua are often used to provide medical attention, according to Father Rivas, as people are often afraid to take the injured to hospitals, where they risked being “taken prisoner.”

“They’ve viewed churches as places where people are plotting against the government,” Father Rivas said.

“For the government, for the paramilitaries, for the Sandinista groups, the church is not viewed well,” he added. “The only thing that (the church) wants is for the country to stabilize with a true, authentic peace.”

The bishops’ conference had convened a national dialogue in an attempt to find a solution, but talks have broken down. Ortega discarded a proposal for holding early elections in 2019, calling proponents of such plans, “Coup mongerers.”

On July 8, Bishop Baez said the bishops would “seriously assess” their continuation as mediators in a national dialogue.

“We cannot continue sitting with representatives of a government that lies, doesn’t accept responsibility and continues massacring the civil population,” Bishop Baez said during Mass, according to the newspaper La Prensa.

“The height of the shamelessness is presenting themselves as innocent and even as victims. When murder is accompanied by cynicism, by lying, it’s doubly grave in the eyes of God.”

In an interview with Spanish news agency EFE, Cardinal Brenes said the pope was “worried” about the crisis and encouraged the bishops “to continue forward in accompanying the suffering people and continue the work of dialogue.”

“He expressed his closeness with us and asked to always be kept informed. He also said that we can always count on his closeness and especially his prayers,” Cardinal Brenes told EFE June 30.

In his Angelus address the following day, the pope called on the faithful to pray for Nicaragua and expressed his support for the country’s bishops and “so many people of goodwill in their role of mediation and witness for the process of national dialogue on the path of democracy.”