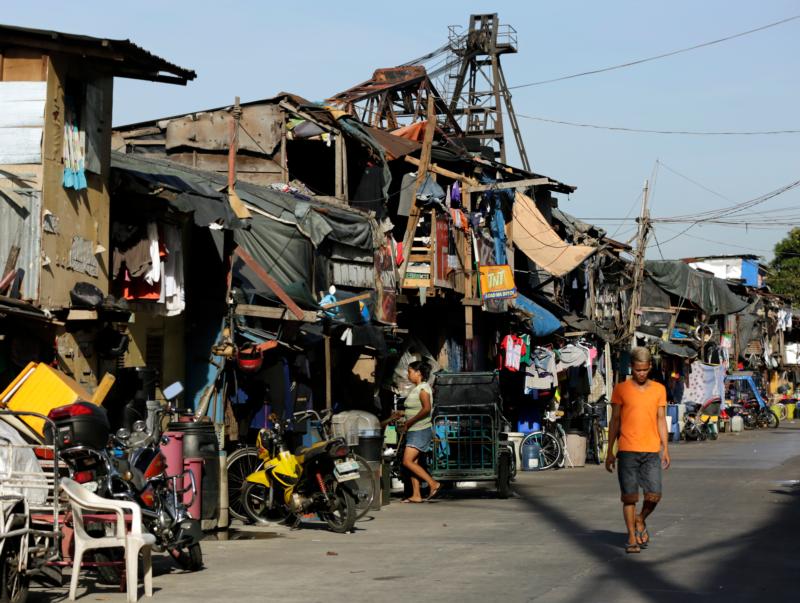 People walk past makeshift homes in early May at a shantytown outside Manila, Philippines. (CNS photo/Francis R. Malasig, EPA)

The bishops said they wanted to “invoke God’s mercy and justice on those who have blasphemed God’s holy name, those who slander and bear false witness, and those who commit murder or justify murder as a means for fighting criminality in our country.”

In a pastoral letter released July 9, the bishops discussed “the cost of witnessing to Christ” and “the sufferings of the poor” as part of the motivation for fasting, prayer and penance.

Among the sufferings they listed were “the cry of poor slum-dwellers being jailed for ‘loitering’ … the sufferings of drug addicts who are labelled as nonhumans,” people “packed like sardines in extremely congested jails,” and “communities forced to leave their homes.”

The bishops also discussed the suffering that comes with being a Christian, saying that divisions, ridicule, persecution and even martyrdom have not been unknown throughout the church’s history.

On June 10, gunmen shot Father Richmond Villaflor Nilo as he was about to celebrate Mass in a village chapel. He was the third priest shot in the Philippines within six months.

Philippine President Rodrigo Duterte made anti-Christian remarks while speaking June 22, saying “Adam ate (the apple), then malice was born. Who is this stupid God? This son of a bitch is stupid if that’s the case.”

In their July letter, the bishops addressed “those who accuse us of getting involved in political moves to destabilize the government.” The bishops said their concern is not earthly governments, which “come and go.” They said, “We work only for God’s kingdom, which is beyond this world.”

“When we speak out on certain issues, it is always from the perspective of faith and morals, especially the principles of social justice, never with any political or ideological agenda in mind.”

“We do not fight our battles with guns and bullets … the battles that we fight are spiritual,” they added.

The bishops chose July 16 because it is the feast of Our Lady of Mount Carmel, “the mountain associated with the bold challenge of the prophet Elijah in defense of God.”

They urged Filipinos to pray to Mary.

“And when we lose heart in the face of persecution, may we stand by you at the foot of the cross and regain our strength from the blood and water that flowed from the wounded side of your beloved Son, our Lord and savior, Jesus Christ,” they said.

NEXT: Bishops, journalists attacked at church in Nicaragua