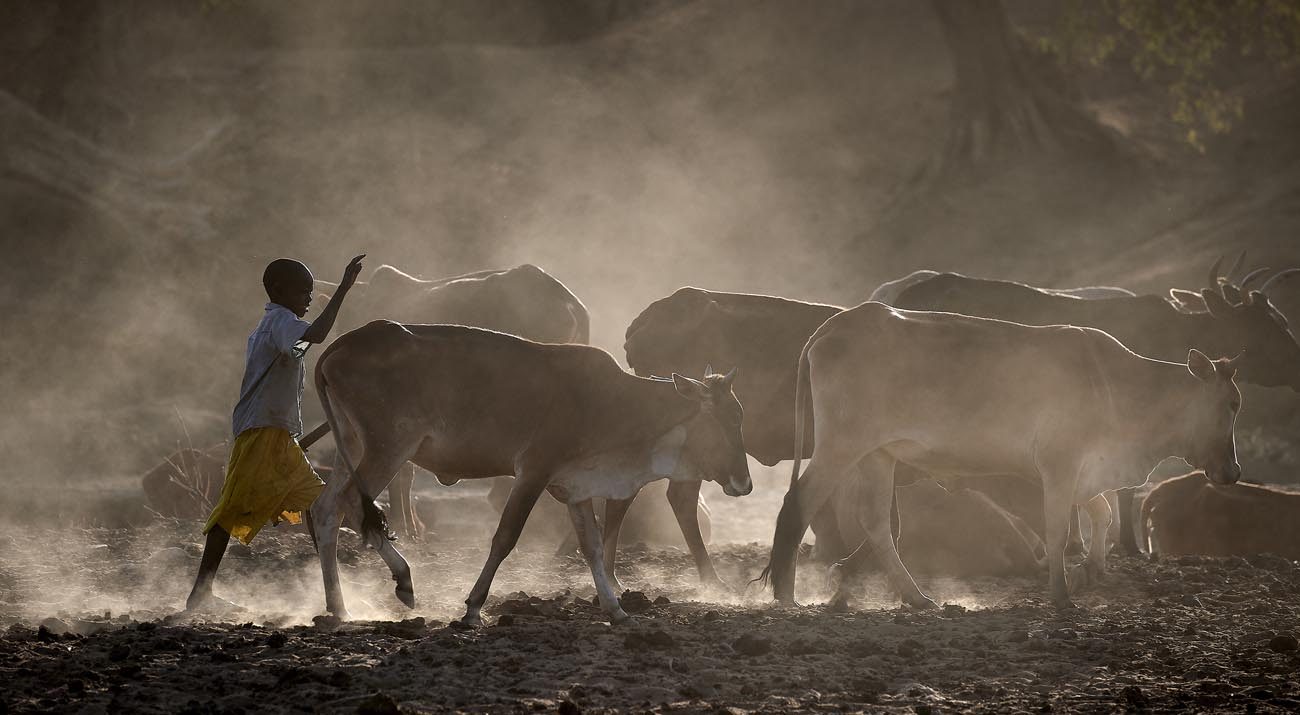 A boy cares for cattle in Gidel, a village in the Nuba Mountains of Sudan. The area is controlled by the Sudan People's Liberation Movement-North and frequently attacked by the military of Sudan. (CNS photo/Paul Jeffrey)

NUBA MOUNTAINS, Sudan (CNS) — Caught between a repressive government to the north and a civil war to the south, residents of the Nuba Mountains of Sudan face difficult choices as they ponder their future. What they can count on, Catholic leaders say, is that the church will continue to accompany them on whatever political path they choose.

“We live in the mountains because we fled from the Arabs who came here to make us their slaves. If the SPLA-North wasn’t militarily strong, the Arabs would have entered here and raped all the women and girls, killed all the men, taken all the property, and enslaved anyone who survived,” said Father Daniel Tutu Kuku, the parish priest in Heiban. He referred to the Sudan People’s Liberation Army-North, a rebel group that controls much of the Nuba Mountains, a small enclave inside Sudan along its border with South Sudan.

“We won’t be slaves. If Khartoum won’t give us our freedom, we will continue fighting. By peaceful means when possible, because the gun can’t win. It only destroys,” he said. “But it is the means by which we protect ourselves. We prefer peaceful means, but when they force us to use the gun, we use it.”

Despite decades of conflict, the future of the Nuba Mountains remains unclear. While the Nuba fought alongside other southerners against the North during the Second Sudanese Civil War (1983-2005), their fate was set aside by the 2005 peace treaty that placed what became South Sudan on the road to independence. Instead, war dragged on for the Nuba, with the government in the capital, Khartoum, sending Russian planes to regularly bomb agricultural land, chasing farmers into caves in the hillsides and leaving the population short on food. While Khartoum stopped the bombing in 2016 during a diplomatic offensive to convince the West to end sanctions, its military standoff with the liberated enclave has continued.

U.N. agencies refuse to enter the Nuba Mountains, unwilling to antagonize the Sudanese government. A handful of international aid groups, insisting on anonymity, provide some humanitarian assistance, but all have problems with access. For years the Catholic Church flew cargo planes of food and medical supplies into the region, but halted those after Khartoum started targeting the flights.

Talks to allow greater humanitarian access have gone nowhere, with Khartoum insisting that all aid be channeled through the North, and the SPLA-North demanding a humanitarian corridor from the border with neighboring South Sudan.

Dr. Tom Catena, a Catholic lay missionary from the United States, said any aid that comes from the North would automatically be suspect.

“When you’ve lived here during the attacks, you’re not going to trust anything from Khartoum. You assume it’s poisoned. You’re going to assume that any vaccines they send are to sterilize the people. It’s not something that’s negotiable,” said Catena, who directs the Mother of Mercy Hospital in Gidel. “That’s the position of the SPLA leadership, and most people agree. I wouldn’t trust them, either. They’ve tried to kill us with bombs, so what’s to stop them from killing us in other ways?”

Comboni Sister Angelina Nyakuru, a Ugandan who serves as head nurse in the hospital, said the people of the Nuba will never surrender. “They are fighting for their liberation. They’ve had it with the North and want to be free,” she said. “They already have their own national anthem. And people in Gidel came to us sisters for cloth to make their own flag. We didn’t have all the colors they needed, but we gave them what we had.”

No one here proposes unifying with South Sudan, which has been plagued by civil war since 2013. With both merger and independence off the table, Catena said some sort of semi-autonomous status might work.

“We had high hopes for places like Kurdistan, but it’s kind of collapsing. So I don’t know how it would work. The Nuba is landlocked and poor. On the other hand, the people don’t need much. They’ll farm, and there’s gold here and there. They’ll find their way. But at the moment, I don’t see any viable political solution,” he said.

Catena said he urges his neighbors to think beyond war to achieve their ends.

“Fighting and killing Arabs isn’t going to solve their problems,” Catena said. “They should prepare themselves to be better than them. Get their revenge that way. Become so excellent in medical care that the Arabs will come here for medical care. Is an Arab guy going to think that he’s better than you when he sees you standing over him with a knife about to operate?”

What’s clear to church leaders is that they must prepare people for whatever political future emerges. One key element is education. Besides health care, a primary emphasis of Catholic work in the region has been opening and operating schools throughout the Nuba Mountains, as well as a teacher training institute in Kauda.

The schools have been largely financed by a Nairobi-based foundation run by Bishop Macram Max Gassis, the retired bishop of El Obeid. For years he has run church operations inside the Nuba Mountains on behalf of the Sudan-based diocese, whose current bishop is not allowed by Khartoum to enter the rebel enclave.

Yet runaway inflation — the Nuba use the troubled South Sudan pound as their currency — coupled with financial shortfalls in Nairobi have pushed several school directors in the Nuba Mountains to attempt to raise school fees this year, a move opposed by most parents. The church has now trained sufficient local teachers that there’s almost no need to import costly foreign teachers from Kenya and Uganda, as has been the practice for years, but the schools still face difficult financial challenges.

“The church puts effort into education because the church looks ahead. It looks to the future,” said Father Zacharia Osman, the parish priest in Lugi. “Without education, nothing good will happen. It’s how we’re creating our leaders for the future. The Arabs in the North educate themselves but don’t care about the education of people here. So we need to do it ourselves.”

NEXT: Sudanese bishop: Despite being many tribes, people are, first of all, Nuba