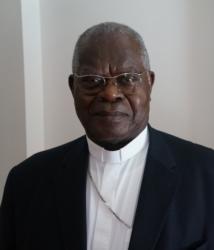 OTTAWA, Ontario (CNS) — There is no room for fear in the life of Cardinal Laurent Monsengwo Pasinya of Kinshasa, Congo.

“A cardinal does not have fear,” said the outspoken leader of one of most violent and volatile countries in Africa. “It is a mission to defend the faith, to the cost of shedding one’s blood. I’m not afraid to do that.”

Cardinal Monsengwo’s condemnation of the current regime has put him in a dangerous position, but he says he does takes measures to stay safe.

“Naturally, I am prudent,” he said in a July 9 interview in French. “I don’t eat just anything; I don’t drink just anything.”

When he’s at home, the two women who prepare and serve his food are his nieces, he said. “No one else enters into the kitchen.”

The cardinal visited Ottawa July 5-13 at the invitation of Canada’s Congolese community. The cardinal, a frequent critic of Congolese President Joseph Kabila, asked for continued prayers for his country as its political and economic situation continues to deteriorate.

Kabila failed to hold elections as promised in a 2016 deal brokered by the Catholic Church. Later, a church-brokered accord allowed the president to stay in office, alongside an opposition head of government, pending elections by the end of 2017. However, in November, Congo’s Electoral Commission said the ballot would be postponed until Dec. 23, 2018.

The church has taken a lead in protests against the continued delay of elections. At least five people died and 120 people were detained when security forces attacked Catholic protesters Dec. 31 in Kinshasa. Since then, 16 people have been killed in three protest marches.

The cardinal said he hoped that, through prayer and peaceful demonstrations, the people of Congo will guide the country toward elections.

“The president wants to remain,” he said. “The people don’t want him. The people want him to go toward elections.”

Some opposition politicians want a transitional government to hold elections instead of having the Kabila government do so, Cardinal Monsengwo said. An international group of observers has warned the president may be trying to “create a state of emergency” so he can declare martial law and stay in power.

According to recent news reports, armed conflict is already taking place in 10 of the country’s 26 provinces, especially in the eastern region. More than 4 million Congolese are internally displaced, with many others having fled to neighboring countries. Congo’s woes have been compounded by conflict over the country’s rich mineral resources.

Canada has recently sent peacekeepers to Mali. Asked if he would like to see Canadian peacekeepers join the 18,000 United Nations forces already in the DRC, the cardinal replied: “Officially, the country does not want more ‘blue helmets.’ (They say) it costs them too much, even though they don’t pay anything.

“But the people want them,” he said. “With the blue helmets, they are able to follow what is happening in different parts of the country.”

While Congo faces massive political and economic problems, the Catholic Church there is “alive and growing,” he said.

Asked what encouragement he might offer Canada, where the Catholic faith has declined, Cardinal Monsengwo said, “Naturally, the faith in Canada is not like it was in the past,” where there were many families like the one that supported him as a seminarian. “We couldn’t have imagined in the past this problem would come to Canada. This evolution could be normal.”

“I could encourage Canadian Catholics to hold fast, to be steadfast in their faith,” he said. “That is what we would wish for them.”