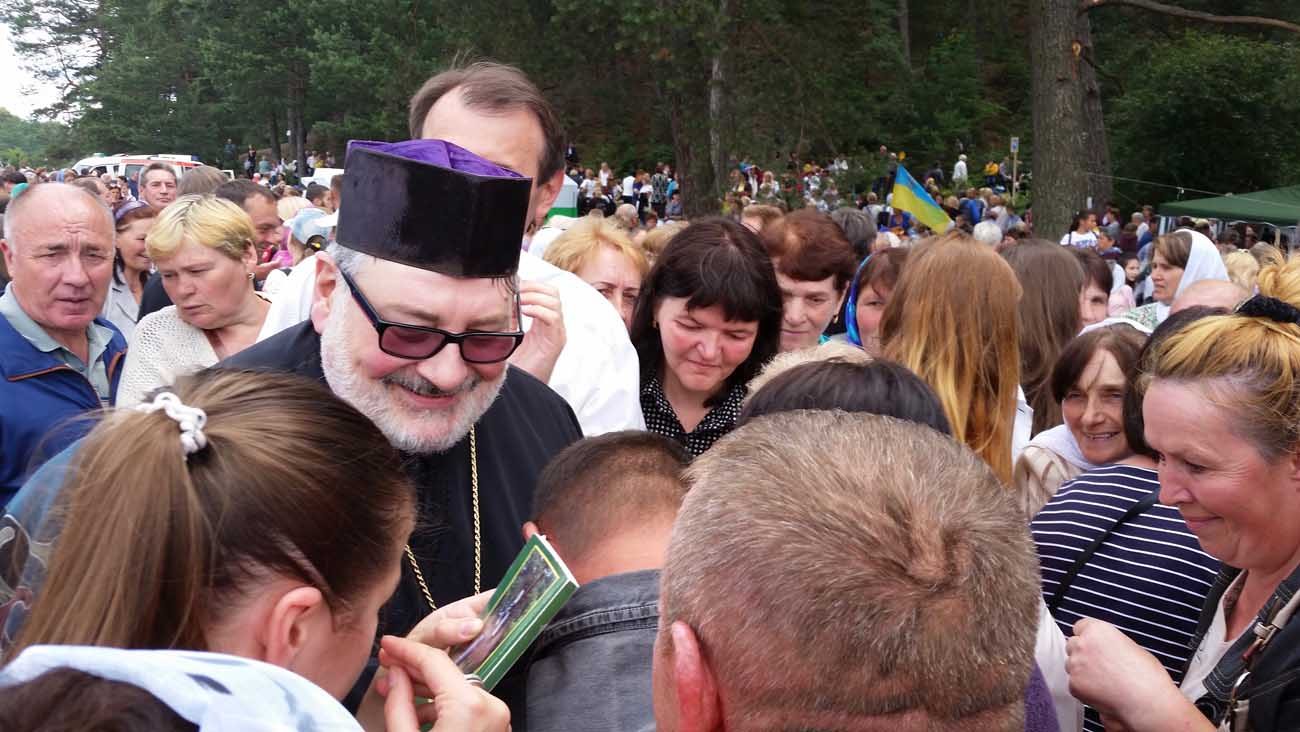 Bishop John Michael Botean of the Romanian Catholic Eparchy of Canton, Ohio, gives blessings to a crowd of pilgrims June 26 during the annual pilgrimage to Stradch, Ukraine. Bishop Botean, who was in Ukraine for a June 25-July 6 solidarity visit on behalf of the U.S. bishops' Subcommittee on Aid to the Church in Central in Eastern Europe, participated in a liturgy at Stradch to honor the beatified martyrs of the Ukrainian Catholic Church. (CNS photo/Don Clemmer, Our Sunday Visitor)

STRADCH, Ukraine (CNS) — People walk miles to participate in the pilgrimage to Stradch, a village about 12 miles northwest of the city of Lviv. Here the Ukrainian Catholic Church gathers every June 26 to honor its beatified martyrs in an outdoor liturgy before a carpet of pilgrims that stretches to the surrounding woods and hills. The liturgy is presided over by Archbishop Sviatoslav Shevchuk of Kiev-Halych, major archbishop of the Ukrainian Catholic Church.

This year, near the end of the liturgy, Archbishop Shevchuk introduced some of the concelebrating bishops in attendance, including one American, Bishop John Michael Botean of the Romanian Catholic Eparchy of St. George’s, based in Canton, Ohio. Archbishop Shevchuk noted that Bishop Botean’s presence represented the solidarity of the U.S. bishops and Catholics in the United States. Bishop Botean was representing the U.S. Conference of Catholic Bishops’ Subcommittee on Aid to the Church in Central and Eastern Europe, which distributes funds from a national second collection, taken up Ash Wednesday in most U.S. dioceses.

As the U.S.-based shepherd of a Byzantine Catholic Church himself, albeit one rooted in neighboring Romania, Bishop Botean told Our Sunday Visitor newsweekly his background offered him “opportunities that no Latin rite bishop would ever have here.” Calling Byzantine Catholicism “an extended family for me,” he said he wanted to use the shared identity “to strengthen the sense of solidarity.”

Bishop Botean said he was struck by how the Ukrainian Catholic Church “really gets it” when it comes to mission and that the staff are “doing really creative work, with very few resources.”

This was evident in his visits to the administrative offices of the patriarchal curia in both Lviv and Kiev, where a structure comparable to the USCCB — and made possible through funding from the collection — helps the bishops of the Ukrainian Catholic Church work collaboratively.

An effort like building marriage preparation programs from the ground up would sound familiar to Catholics in the United States, but other efforts are more innovative, such as intentionally facilitating exposure between the elderly and young people.

“I spent my time with my grandparents,” Father Bohdan Tymchyshyn, who oversees the family life efforts of the patriarchal curia, noted of his own formation in the faith. Meeting with the U.S. delegation June 27, Father Tymchyshyn highlighted the role of family in evangelization.

“Transmission of faith — it belongs to the family.” He added that families come to church together, not just for faith, but for the community that parish life engenders. “It helps the family itself and also the young people to learn from each other … especially on the moral issues.”

It is nearly impossible to disentangle the story of the Ukrainian Catholic Church from the painful traumas its people have endured, past and present. For instance, the Holodomor — the Soviet-engineered famine that caused millions of Ukrainians to starve to death in 1932-33 — is a horror that elderly grandparents still remember. But Ukrainian Catholics most frequently reference the experience of their church being driven underground from 1946 until the collapse of the Soviet Union. Bishops died in jail. Church properties were confiscated. Worship took place in people’s homes in the dead of night. Several people who spoke to OSV said, “They were like the first Christians.”

More recently, Ukraine has experienced the revolution of late 2013 and early 2014, which saw the ouster of its president. Early 2014 also saw the annexation of Crimea by Russia and the beginning of a war that continues to be fought in the country’s eastern and southern regions. Meanwhile, the new government struggles to overcome corruption and financial instability. These factors make the role of the U.S. bishops’ collection even more critical for the church, Ukrainian church leaders said.

“The support is something absolutely necessary,” Archbishop Claudio Gugerotti, apostolic nuncio to Ukraine, told OSV. “There are reforms going on, but it takes an awful lot of time, and people are in need.” The economic state of the country is keenly felt in the tradition of the Ukrainian Catholic Church, he noted, where over 90 percent of priests are married.

This Eastern-rite fold makes up some 8-10 percent of the country’s population and is a fraction of the size of Ukraine’s Orthodox majority, but it’s still the largest church in Ukraine in communion with Rome. Roman, or Latin-rite, Catholics constitute only 1 percent of the population.

Archbishop Shevchuk, who is only 48, despite his already having led Ukrainian Catholics for seven years, sees an evangelizing vitality in his church.

“Because of our evangelical position,” he said, “our church is very attractive. We have much to say to the Ukrainian society, and young people are attracted by the witness of our church.”

Tetiana Stawnychy, who oversees the USCCB National Collection for the Church in Central and Eastern Europe, agreed.

“One of the things that I think the church really has to offer society is that kind of prophetic speaking into civil society, into the fabric of life — through values, through Catholic social teaching,” Stawnychy told OSV.

She added that the experience of being driven underground has a consequential impact.

“There’s something very genuine and vibrant about (the church’s) witness. I think many of the faithful would tell you … that they stand on the shoulders of giants,” she said.

Projects that the U.S. bishops help to fund in Ukraine have largely fallen into two areas: helping rebuild church facilities that, when returned after communism’s collapse, were in grave disrepair; and seminary education, ongoing formation for priests — who often studied clandestinely — and other programs. This coupling of aid was evident on a June 26 visit by the USCCB delegation to the Eparchy of Sokal-Zhovkva, where Bishop Mykhaylo Koltun showed his guests a roofing project currently underway with USCCB funds, then introduced Bishop Botean to mothers of Ukrainian soldiers who participate in a program for grieving military families.

At the House of Mercy, a center for children with special needs in Chortkiv, Stawnychy emphasized how unheard-of such care would have been under communism and is still unusual in Ukraine today. She noted that the church’s efforts have allowed for this dynamic growth at the service of people in need.

“When communism fell apart, there was suddenly this upswelling of faith, of belief that I think really helped to move each of the countries back in the direction of regaining all these things that were lost — restoring a sense of initiative, restoring a sense of trust.” The fruits, she said, are “healing, both to the human person and to society.”

PREVIOUS: Congolese cardinal does not fear death but is careful what he eats