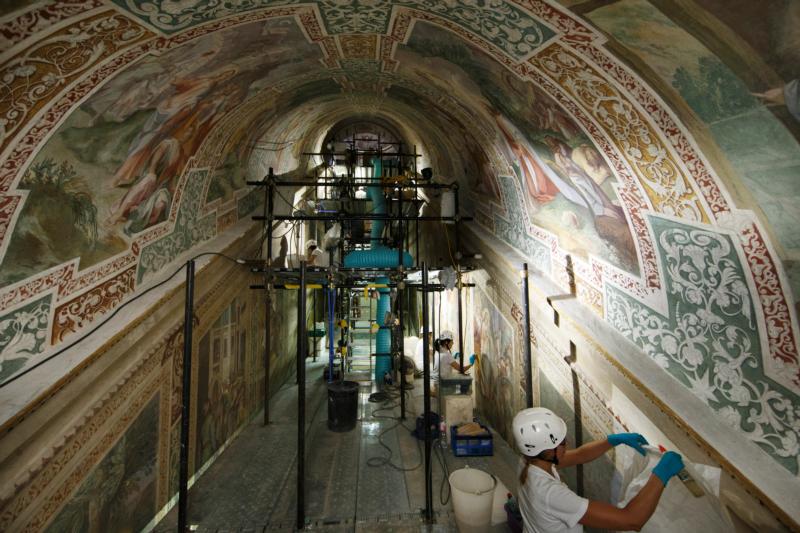 Workers restore the frescoes surrounding the Holy Stairs at the Pontifical Sanctuary of the Holy Stairs in Rome July 10. Vatican restorers are completing the final phase of a 20-year effort to restore 16th-century artwork at the sanctuary. Tradition maintains that Jesus climbed the stairs when Pilate brought him before the crowd. (CNS photo/Paul Haring)

VATICAN CITY (CNS) — With large sheets of plain plywood blocking public access to the Holy Stairs, one woman lovingly touched a large color photograph of the stairs, made the sign of the cross, lowered her head and prayed.

For centuries, the faithful have climbed up the 28 steps in prayer on their knees.

But the popular devotion has been put on hold for an entire year, and the tall placard depicting the staircase is all the public can see as a team of Vatican restorers complete the final phase of a 20-year effort to repair the sanctuary of the Holy Stairs and clean its 18,300 square feet of frescoes.

According to tradition, the Holy Stairs are the ones Jesus climbed when Pontius Pilate brought him before the crowd and handed him over to be crucified. It’s said that Constantine’s mother, St. Helen, brought the stairs to Rome from Jerusalem in 326 A.D.

In 1589, Pope Sixtus V had the sanctuary specially built and decorated for the stairs and the Sancta Sanctorum above, which houses some of the oldest relics of Rome’s early Christian martyrs and a silver- and jewel-covered Byzantine image of Christ.

The 16th-century pope wanted the sanctuary not only to preserve the important relics, but also to express the essentials of the faith through an abundance of vivid, colorful images describing key events in the Old and New Testaments, said Mary Angela Schroth, a Rome art gallery curator who has been involved in the restoration project.

“Since the faithful often did not read or write, the stories came to life” through images, she told Catholic News Service in mid-July. And so, “every square inch” of the sanctuary — its two chapels, five staircases, vaulted ceilings and broad, high walls — were covered in frescoes and decorative art.

“This was meant to amaze and attract the public,” she said.

But the illustrative gems slowly vanished over the centuries as dirt, grime, water damage and primitive or aggressive restoration techniques discolored or covered up what lay beneath. Add poor lighting to the mix and the dingy, gloomy space no longer did what it was designed to do: be a completely immersive physical, spiritual experience with visual cues accompanying the faithful on their journey toward the Sancta Sanctorum, said Paolo Violini, the Vatican Museums’ top expert in fresco restoration.

With initial help from the Getty Foundation in 2000 and then through the generosity of the Patrons of the Arts in the Vatican Museums, both the St. Lawrence and St. Sylvester chapels and the four stairwells — two sets on either side of the central stairwell of the Holy Stairs — have been fully restored. 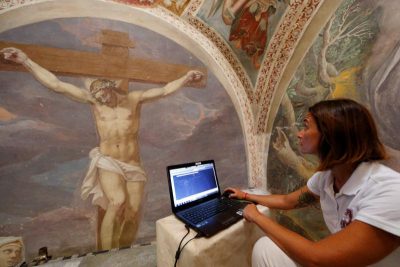 Francesca Cencia maps the restoration of a fresco of the crucified Jesus above the Holy Stairs at the Pontifical Sanctuary of the Holy Stairs in Rome July 10. (CNS photo/Paul Haring)

With the central staircase restoration planned to be completed by the end of the year and the front atrium at the end of 2019, it will have taken 11 modern-day restorers nearly two decades to resurrect what 40 artists created in less than two years in the 16th-century. But the careful craft of restoration has paid off, allowing today’s visitors the privilege of seeing, after 400 years, the original decorative beauty Pope Sixtus’ painters had conceived, Violini said.

People barely glanced at the darkened surfaces before the restoration, Schroth said, but now with “these glorious colors” and proper lighting, visitors are doing more than just looking, “they are observing and studying these stories” and recalling their meaning.

The sanctuary’s rector, Passionist Father Francesco Guerra, told CNS that Christian art in sacred spaces is not just some extraneous, decorative flourish, but is a medium as powerful as the spoken and written word, created to explain and share the faith and bring the faithful into a deeper, closer relationship with God.

The sanctuary, which is entrusted to the care and protection of the Passionist fathers, powerfully exemplifies this visual catechism, which exists in so many churches and shrines, but needs “re-evaluating” and re-emphasizing today, he said.

Paul Encinias, director of the Rome-based Eternal City Tours, told CNS that when he has taken groups to the Holy Stairs, their focus is inward — on their individual prayers and intentions — as they climb each step on their knees.

“Twenty-first century Catholic pilgrims are far removed from artistic narratives,” he said, and they are “not used to these visual cues” that surround them, so the purpose and meaning of such artwork would probably have to be explained.

Nonetheless, some of the visitors Encinias brings to pray on the Holy Stairs often have “a strong emotional” experience as they pray and reflect on life’s problems or trials.

“We’re usually afraid of suffering,” and most homilies don’t dwell on it, he said. But because the Holy Stairs tour encourages people to connect with Christ’s passion, “something hits home” and people realize “Christ is with us always, even in our suffering.”

Even though while the Holy Stairs are closed the sanctuary has offered a side staircase for the same devotional practice of praying on one’s knees, there were only about a dozen people using the alternative staircase late morning on a July weekday. On average, about 3,000 people visit the sanctuary each day.

Father Guerra said Pope Francis has underlined the importance of traditional, popular devotions and pilgrimages to sanctuaries and sacred places. People are made up of “spirit and intellect, but we are also flesh, emotions, feelings,” he said.

In the Bible, when Jesus performs a miracle, “he touches the person, he puts his fingers in the ears of the deaf man” and takes the hand a dead girl to bring her back to life, the priest said.

This physical contact, which is an inseparable part of one’s humanity, is a key feature of the Holy Stairs, he said. By climbing the stairs on one’s knees and reflecting on Christ’s passion, “people feel in union with Jesus, they feel understood by Jesus, they feel loved by God.”