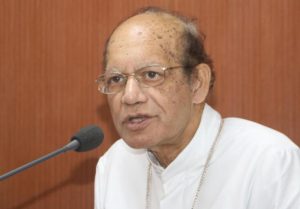 NEW DELHI (CNS) — India’s Catholic Church has led a chorus of protest over a demand to ban the sacrament of reconciliation from the chairwoman of the National Commission for Women.

“This demand is absurd and it displays ignorance about the sacrament of confession,” Cardinal Oswald Gracias of Mumbai, president of Catholic Bishops Conference of India, told Catholic News Service July 27.

“The tenor of the demand shows they do not understand the meaning nor do they have respect for religious freedom,” the cardinal said following wide media coverage of the July 26 demand from Rekha Sharma, commission chairwoman.

Sharma said that “priests pressure women into telling their secrets,” noting that the commission had heard testimony about one such case. “There must be many more such cases and what we have right now is just a tip of the iceberg,” she said in calling for the end of the church practice of confessing sins.

The call came after five Malankara Orthodox Syrian Church priests in Kerala state were suspended from ministry, including at least two who had sex with a married woman.

The scandal erupted when an audio clip of a telephone conversation, purportedly between the woman’s husband and a church official, went viral on social media in June, ucanews.com reported.

The woman’s husband said he learned of the incident after he found a bill for a five-star hotel in his wife’s name and she admitted what had occurred.

The commission’s demand “betrays a total lack of understanding of the nature, meaning, sanctity and importance of this sacrament for our people; and also an ignorance of the strict laws of the church to prevent any abuse,” Cardinal Gracias said in a press statement July 27.

“Such a ban will be a direct infringement on our freedom of religion guaranteed by the Indian Constitution. … I am confident the government will totally ignore this absurd demand from the commission,” Cardinal Gracias said.

The cardinal urged the commission “to pay attention to empowerment of women, their capacity building, prevention of domestic violence, organizing rescue systems, and so on, instead of dabbling in religious matters about which it understands nothing.”

“It is an attack on the Christian faith and spiritual practice,” the council said. “We strongly feel that the recommendation is unwarranted. … We suspect communal and political motives behind this unconstitutional interference into the internal spiritual affairs of the church.”

Cardinal Gracias told CNS that there seemed to be a “contrived attempt” by Sharma to discredit the church by making such a “shocking demand.”