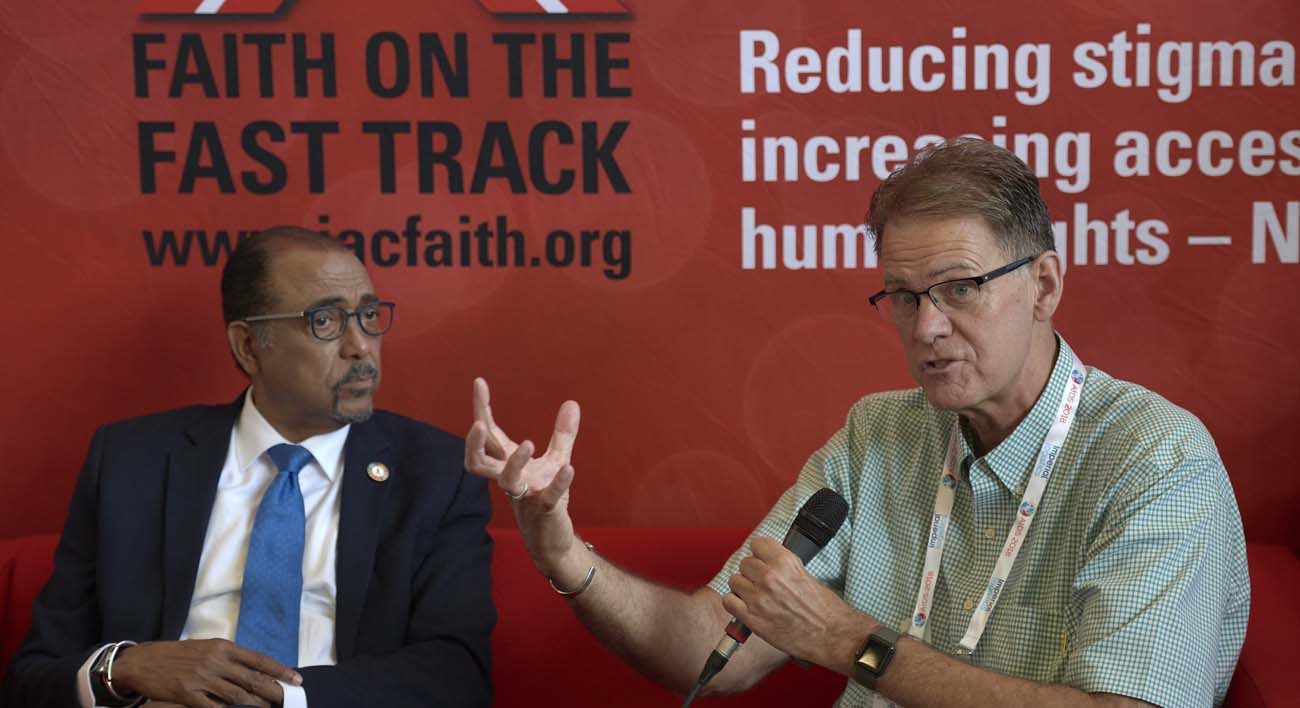 AMSTERDAM (CNS) — Despite rumors of its demise, the AIDS pandemic is far from over, and churches must continue to play a critical role in combating the disease, Catholic leaders were told at an international gathering of more than 15,000 AIDS researchers and activists.

“We broke the conspiracy of silence, but now we face the conspiracy of complacency,” said Michel Sidibe, executive director of the Joint United Nations Program on HIV/AIDS, known as UNAIDS, in a July 24 conversation with Catholic and other faith leaders at the International AIDS Conference in Amsterdam.

While progress had been made in testing, treatment and prevention of HIV in many settings, the agency warns that new infections are on the rise in some regions and among several key populations, and drug-resistant forms of the virus are beginning to appear. In addition, a population boom of children and adolescents, particularly in sub-Saharan Africa, will be particularly susceptible to infection following years of overly optimistic messaging about the end of AIDS as a public health threat.

UNAIDS also warns that global funding for the AIDS response is insufficient to get to those remaining sectors that until now have proved unreachable.

“It is impossible for us to reach those who are difficult to reach and really remove the barriers of stigma and discrimination,” Sidibe told the religious leaders. “We need people who all their lives have been building bridges between people. That is who you are.”

Msgr. Robert J. Vitillo, secretary general of the International Catholic Migration Commission and long the Vatican’s point man on HIV and AIDS, said the world’s response to AIDS was hampered by a premature declaration of victory.

“The message was put out a few years ago, even by some U.N. agencies, that we were almost at the end of AIDS. Magazine covers declared, ‘The end of AIDS.’ That message went far and wide and it’s been hard to overcome it. We were not at the end of AIDS then, and we are not there now,” Msgr. Vitillo told Catholic News Service.

“There is indeed complacency. There is a sense that we’ve spent so much energy on this one disease while there are other priorities to attend to. And many people in the world, and some governments, have simply been judgmental about people who are different. They reject them and say it’s not worth it. People who make us uncomfortable or who we don’t see as productive are set aside. This is what Pope Francis is describing when he talks about the throwaway culture and the globalization of indifference,” he explained.

Participants in the biennial global gathering heard about advances in treating HIV infection, including what’s been dubbed “U equals U” — research showing that HIV positive individuals under treatment with anti-retroviral medications who have achieved an undetectable viral load cannot pass on the virus to others. Thus, “undetectable” equals “untransmittable.”

“It’s a miracle. And the data is irrefutable,” said Maryknoll Father Richard Bauer, who chairs the Catholic HIV and AIDS Network.

“We call this the three zeros. Zero missed doses. Zero missed clinical appointments. Zero viral load. If you can get the three zeros, the virus becomes undetectable in the body and it’s virtually impossible to physically transmit it to others. That has huge implications, especially for married couples where one person is HIV positive and their partner is not. And couples no longer have to be afraid of conception because the virus can’t be transmitted to the baby as long as we keep those three zeroes going,” Father Bauer said.

By allowing such couples to have unprotected sex, the research allows Catholics to sidestep a moral dispute which for years has perplexed some in the church over the use of condoms.

“We still need to be talking about healthy human sexuality and values, because even though you may be undetectable and untransmittable with HIV, there are other sexually transmitted diseases,” Father Bauer said. “That’s where we still need to be a moral force for healthy relationships.”

Cutbacks in AIDS funding from the United States government and international agencies was a common concern among religious leaders at the conference. While money continues for producing anti-retroviral pills, funding for social workers and counselors is declining.

“We now have the medical ability to end this pandemic. Praise God and thank you Jesus. But it takes more than pills and doctors and nurses. To make treatment adherence work takes social workers and community health activators. Many of them are volunteers, and we need funding for training and support,” Father Bauer said.

Father John Toai, director of the HIV and AIDS ministry of the Archdiocese of Saigon, Vietnam, explained that faith groups often provide the necessary environment in which pills can work.

“People living with HIV, especially children, need more than just medicine,” Father Toai said. “They need love. They need acceptance. They need to see the value of their life, no matter their HIV status. This is where the church must reach out and say that we accept you, that you are loved by God, and we are here to accompany you.”