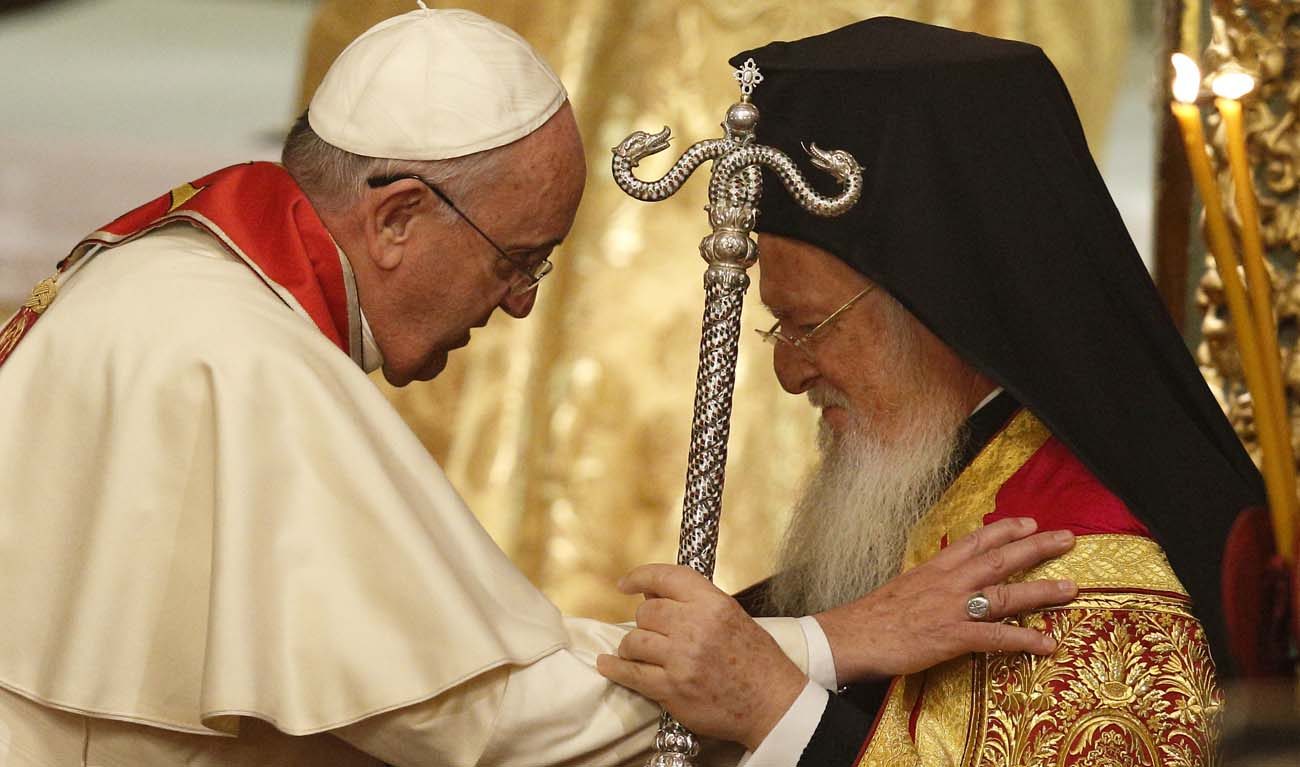 Pope Francis and Ecumenical Patriarch Bartholomew of Constantinople embrace during a 2014 prayer service in the patriarchal Church of St. George in Istanbul. (CNS photo/Paul Haring)

UPDATED – VATICAN CITY (CNS) — Pope Francis’ visit to the southern Italian Adriatic port city of Bari will be an occasion to once again affirm the church’s closeness with persecuted Christians in the Middle East, Swiss Cardinal Kurt Koch said.

As the birthplace of Christianity, the Middle East plays a special role in promoting a path toward unity, the cardinal said.

“The Middle East, which is a martyred region, is a place where ecumenical relations are strongest and most promising, particularly between Orthodox and Catholics,” said Cardinal Koch, president of the Pontifical Council for Promoting Christian Unity.

Cardinal Koch, along with Cardinal Leonardo Sandri, prefect for the Congregation for Eastern Churches, updated journalists July 3 on the pope’s trip to Bari, where he will host a day of reflection and ecumenical prayer for peace in the Middle East.

Pope Francis will meet with the patriarchs and representatives of the Eastern Churches and pray before the relics of St. Nicholas, who is venerated by both Catholics and Orthodox.

They will then travel by bus to the site of the ecumenical prayer service and afterward return to the Basilica of St. Nicholas, where the pope will meet privately with the patriarchs for more than two hours.

During his Sunday Angelus address July 1, Pope Francis called on the faithful to join him and the patriarchs “in prayer on this pilgrimage of peace and unity” for the Middle East.

“We will live a day of prayer and reflection on the always tragic situation of that region where so many of our brothers and sisters in the faith continue to suffer and we will implore in one voice: ‘Peace be upon you!'” the pope said.

Cardinal Koch said the persecution and suffering of Christians in the Middle East is an “ecumenical incentive” for Christians around the world.

Christian leaders, he said, must work together to avoid a scenario of “a Middle East without Christians; not for religious reasons but also for political and social reasons, because Christians are an essential element of balance in the region.”

In Lebanon July 5, four Mideast church leaders met ahead of their participation in the Bari meeting.

The church leaders stressed the need for “working for the consolidation of a just and lasting peace in the (Middle East) region, ending the wars immediately and returning all displaced persons, refugees and kidnapped people to their countries with dignity, so that they can restore their role and preserve their cultures in their homelands.”

Lebanon, with its existing population of about 4 million people, has absorbed some 1.5 million refugees from neighboring Syria.

The prelates also emphasized the importance of a “constructive and active Christian presence in the countries of the Middle East, on the basis of citizenship and equality.”

NEXT: ARCIC document hailed as ‘groundbreaking’ by Catholics and Anglicans