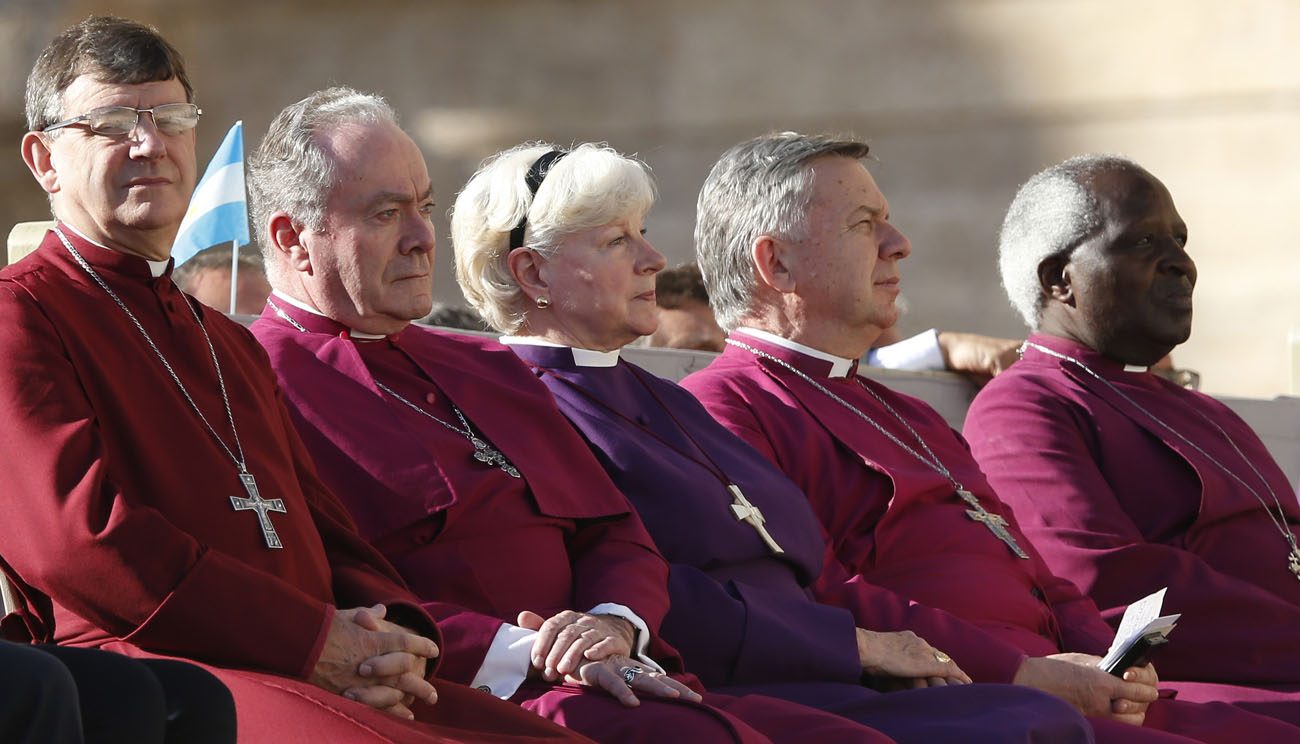 Members of the board of governors of the Anglican Center in Rome attend Pope Francis' general audience in St. Peter's Square at the Vatican Nov. 19, 2014. The Anglican-Roman Catholic International Commission July 2 published its first document in 13 years on how both institutions can learn from each other in the exercise of ecclesial authority locally, regionally and globally. (CNS photo/Paul Haring)

VATICAN CITY (CNS) — The Anglican-Roman Catholic International Commission published its first document in 13 years on how both institutions can learn from each other in the exercise of ecclesial authority locally, regionally and globally.

The document, “Walking Together on the Way: Learning to Be the Church — Local, Regional, Universal,” is the first to come out of the third phase of the Anglican-Roman Catholic International Commission, known as ARCIC III, which began meeting in 2011. The Pontifical Council for Promoting Christian Unity made the document public on its website July 2.

The latest agreed statement on how structures of authority support and promote ecclesial communion is considered a key element in understanding how discussion and debates are handled and decisions about ethics and “right” moral teachings are made, which will be the topic of the next document by ARCIC III.

The statement also represents a new methodology of “receptive ecumenical learning,” which, it says, seeks “to learn how the experience and structures of the other tradition might help them address their own questions and difficulties.”

The document explores the respective structures of the Catholic Church and the Anglican Communion and identifies the challenges and difficulties each tradition faces at the local, regional and worldwide levels. It then asks what each tradition holds that might be transformative or beneficial and learned from the other tradition so as to better support the mission of the church.

“This task requires frank assessment, repentance, and the courage to look at ourselves honestly and learn from the other,” the agreed statement said.

Some of the highlights from the document include (with the numbered paragraphs in parentheses):

— Concerning involvement of the laity in Catholic Church governance, the church “could learn from the mandatory roles accorded to the laity in Anglican parochial and diocesan structures, in ways that would nevertheless preserve the executive roles proper to the parish priest and the bishop.” (99)

— On the need for more open conversation, the quality of conversation at parochial and diocesan levels of the Catholic Church “could be enriched by learning from Anglican experience of open and sometimes painful debate while the church is in process of coming to a common mind.” (101)

— Regarding ministry, “while the commission recognizes that some decisions regarding ministry made by provinces of the Anglican Communion are not open to the Roman Catholic community, others potentially are, e.g. a female diaconate; a fuller implementation of licensed lay pastoral assistants; the priestly ordination of mature married men — viri probati; and the authorization of lay people to preach. …  There is reason to suggest an enlarged role for authorized lay ministry, including the canonical opening of the ministry of lector to women.” (102)

— As for strengthening the role of regional structures of church life, the teaching role of Catholic bishops’ conferences could be strengthened by way of “what might be called a ‘pastoral magisterium,’ the pastoral development of teaching that is formulated in a more abstract manner at the universal level;” it is a role suggested by Pope Francis’ apostolic exhortation on the family, “Amoris Laetitia,” asking communities to devise more practical and effective initiatives that respect both the church’s teaching and local problems and needs. (120)

— Regional or national synodal bodies involving laity, religious, and clergy could be established periodically for discernment and discussion to inform the bishops as the authoritative teachers of the faith. Also, laity, religious and clergy could be given a deliberative vote in Catholic provincial/regional councils on matters such as worship, pastoral outreach or community self-discipline. (122)

— “Pope Francis has noted a tendency of bishops to defer too readily to Rome rather than to exercise their own proper authority. The decision-making authority exercised by Rome — particularly in relation to episcopal appointments, and its power to censure, can render both individual bishops and episcopal conferences reticent and constrained in exercising their proper authority in service of the Word and ministry to the people.” (143)

— The Catholic instinct for unity “can tend to assume that the entire church always needs to move as one on all things, with the consequence that even legitimate cultural and regional differences are suppressed. While there are acknowledged tensions within the Anglican Communion, the Roman Catholic Church might fruitfully learn from the Anglican practice of provincial diversity and the associated recognition that on some matters different parts of the Communion can appropriately make different discernments influenced by cultural and contextual appropriateness.” (148)

— The Anglican tradition’s way of cherishing the role of the local and regional church and the Catholic Church’s high priority on the need for ecclesial unity and coherence “are valued as gifts of grace and providence” but are also affected by sin, “as can be seen when the concern for autonomy becomes one of outright independence and when the concern for ecclesial unity and coherence becomes excessive centralized power. Hence there is the need for ecclesial repentance and for reform of our instruments of communion in this respect.” (155)

— “The discernment of proper teaching, sound governance, and appropriate pastoral care requires a healthy and open conversation in the church. In the judgement of the commission, the Roman Catholic Church can learn from the culture of open and frank debate that exists at all levels of the Anglican Communion” and it can articulate more clearly the authority of episcopal conferences. The Synod of Bishops could also “be granted a deliberative role.” (157)

The document can be found in English here and a Catholic commentary on the document here.