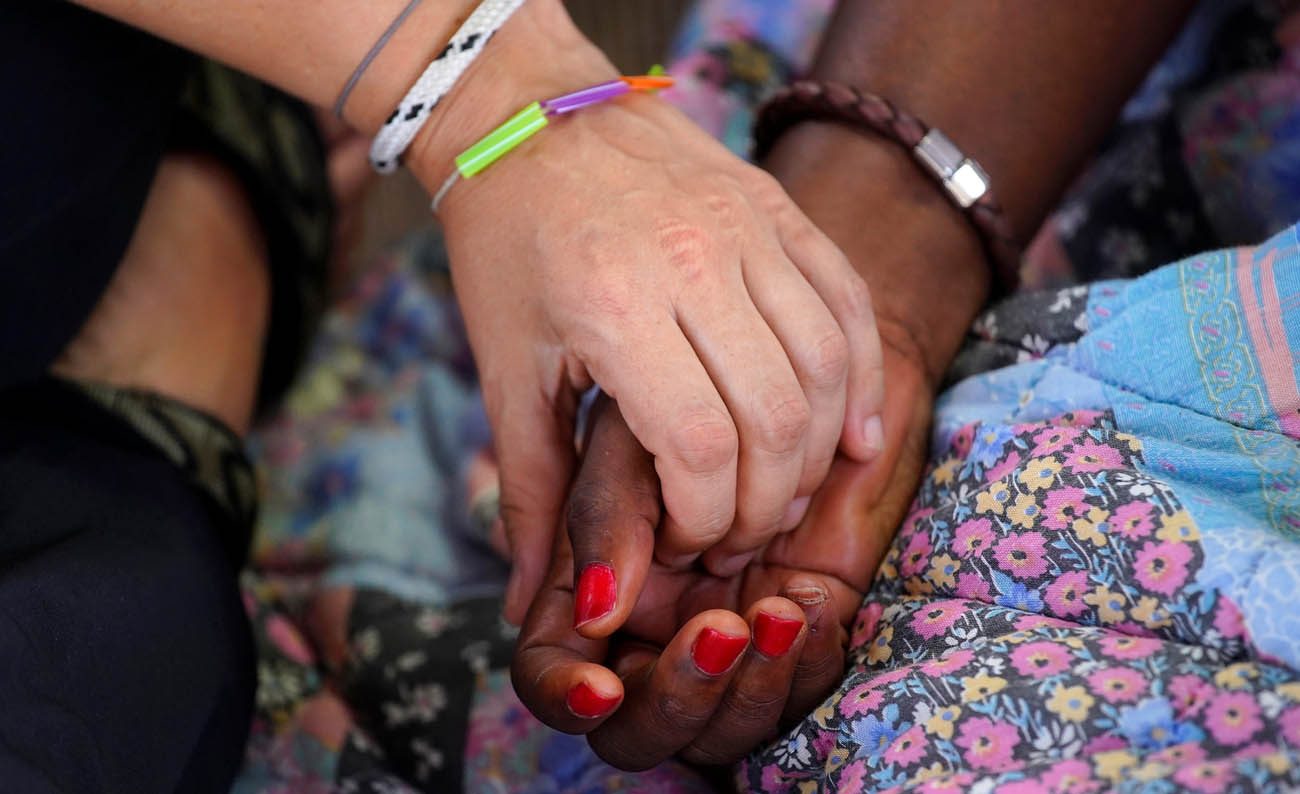 A crew member of the Spanish nongovernmental organization Proactiva Open Arms holds the hand of a woman who was rescued July 17 in the central Mediterranean Sea. The main mission of the NGO is sea rescues of refugees that arrive in Europe fleeing wars, persecution or poverty. (CNS photo/Juan Medina, Reuters)

“I make a heartfelt appeal to the international community to act decisively and promptly in order to prevent such tragedies from recurring and to guarantee the safety, respect for the rights and dignity of all,” the pope said July 22 after reciting the Angelus prayer with an estimated 25,000 people gathered in St. Peter’s Square.

According to the International Organization for Migration’s Missing Migrant Project, an estimated 1,490 migrants have died in the Mediterranean Sea this year. The pope expressed his pain “in the midst of such tragedies” and offered his prayers “for the missing and their families.”

In Italy, Interior Minister Matteo Salvini has barred several rescue ships from docking and has vowed to stop any foreign boats carrying rescued migrants into the country. The move has hampered rescue efforts of migrants trying to escape war, violence, persecution and poverty.

Before making his appeal, the pope reflected on the day’s Gospel reading in which Jesus invites his disciples to rest after their first mission, but the gathering of a large crowd prevents them from relaxing and eating.

“The same thing can happen today as well,” the pope said. “Sometimes we don’t succeed in carrying out our plans because something urgent occurs that messes up our plans and requires flexibility and availability to the needs of others.”

In those situations, he continued, Christians are called to imitate Jesus who wasn’t upset but rather was compassionate toward the people because “they were like sheep without a shepherd.”

“Jesus’ gaze isn’t a neutral gaze or, worse, cold and distant because Jesus always looks with the eyes of the heart. And his heart is so tender and full of compassion that he is able to see even the most hidden needs of people,” the pope said.

The same compassion, he added, is the “behavior and predisposition of God toward humankind and its history.”

“With Jesus at our side, we can proceed safely, we can be overcome trials, we can progress in love toward God and toward our neighbor. Jesus has made himself a gift for others, becoming a model of love and service for each one of us,” Pope Francis said.