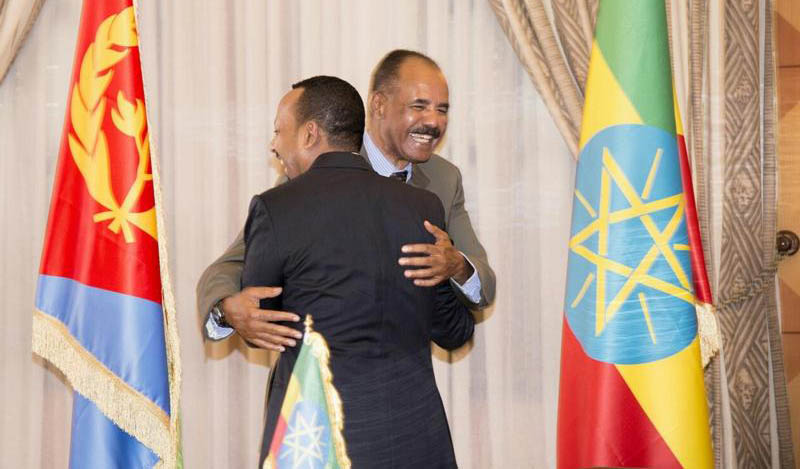 VATICAN CITY (CNS) — The bishops of East Africa praised the peace efforts that brought an end to the two-decade war between Eritrea and Ethiopia.

In a statement July 22, the Association of Member Episcopal Conferences in Eastern Africa, known by the acronym AMECEA, said the steps taken by the leaders of both countries “show that Africans have the wisdom to solve their own problems amicably.”

“As this process of reconciliation continues, the Catholic Church urges the stakeholders to ensure that justice and peace are restored and let the peoples of these countries be involved in the process, their voices heard and captives returned to their families,” the bishops said.

In their statement, the bishops said the news of a peaceful end to the war between Eritrea and Ethiopia was received “with great joy.”

“The Catholic Church in both countries had been raising their voice to denounce the fraternal conflict and war, prayed together and gave hope to the people throughout by remaining firm to solve the situation peacefully and showing solidarity with the peoples of both countries,” the statement said.

An estimated 80,000 people are believed to have been killed between 1998-2000 during a fierce border conflict. However, after the two countries signed a U.N.-brokered border agreement in 2000, they failed to implement it.

In their statement, the East African bishops also appealed for peace in countries where ethnic divisions have caused escalating conflicts, and they condemned “any form of manipulation of differences in our region that undermines the dignity of the human person.”

A peace agreement in South Sudan between government and rebel forces, who have been engaged in a civil war since the country gained its independence in 2011, was a sign of progress, and the bishops prayed “for the quick resolution of the conflict so as to alleviate the suffering of the people and end the loss of innocent lives.”

The bishops also called for the promotion of “integral ecology” as called for by Pope Francis in his encyclical “Laudato Si’,” urging Catholics in East Africa to “recognize and respect creation as a gift of God to mankind.”

Although the use of natural resources “cannot be avoided,” the bishops said no one should “hide or distort facts in order to gain selfish advantage.”

“We must engage in honest, transparent, constructive dialogue based on the principles of solidarity, subsidiarity, working for the common good, universal destination of goods, and preferential option for the poor and for the earth,” the bishops said. “Let everyone knows that the mother earth is our common home.”

PREVIOUS: Pope calls for respect for migrants amid rising number of deaths at sea