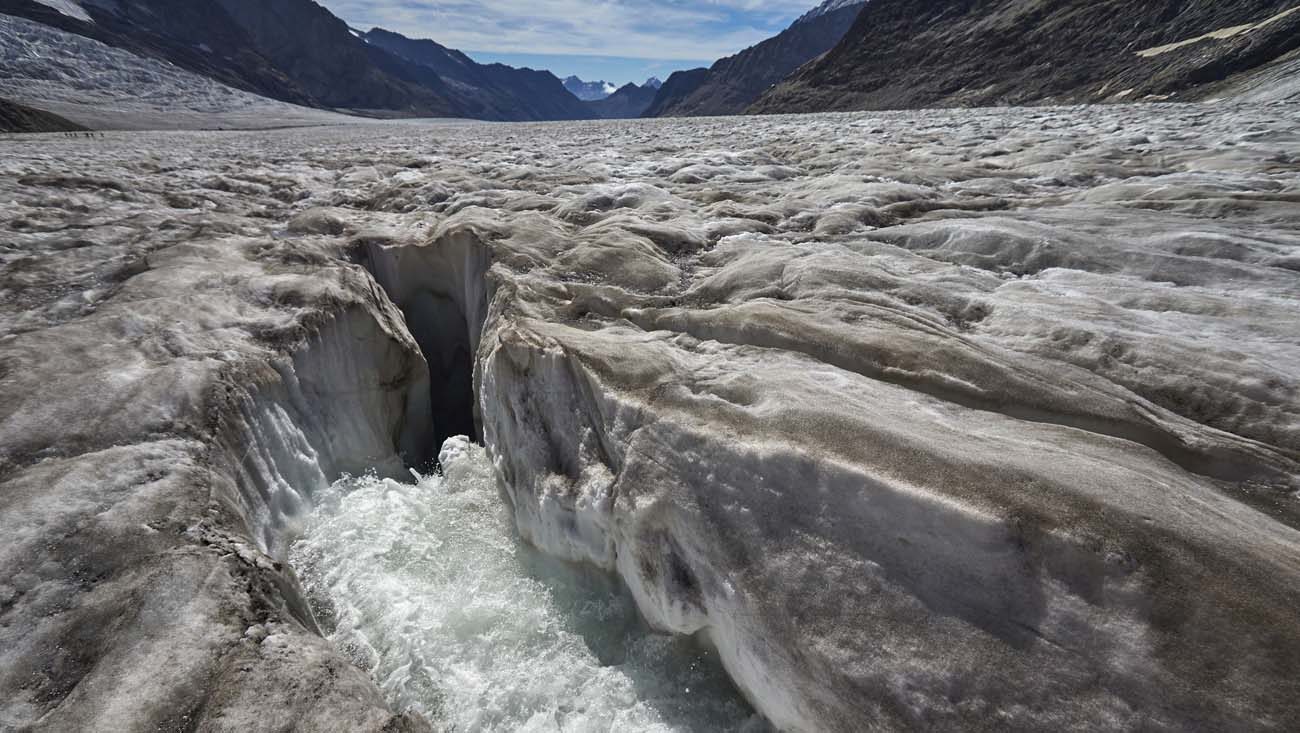 Water from the melting Aletsch Glacier in the Swiss Alps runs down through a hole in 2015. While everyone has a role and responsibility to help safeguard the planet, all governments must uphold commitments agreed upon in the Paris Accord on reducing climate change, Pope Francis said. (CNS photo/Denis Balibouse, Reuters)

VATICAN CITY (CNS) — While everyone has a role and responsibility to help safeguard the planet, all governments must uphold commitments agreed upon in the Paris Accord on reducing climate change, Pope Francis said.

Without concerted and immediate efforts toward sustainable development, “There is a real danger that we will leave future generations only rubble, deserts and refuse,” he said July 6.

The pope made his remarks in an address to 300 people taking part in a July 5-6 international conference organized by the Dicastery for Promoting Integral Human Development.

The conference, “Saving our Common Home and the Future of Life on Earth,” brought together indigenous and young activists, scientific experts, religious leaders and Vatican officials to assess the impact of Pope Francis’ 2015 encyclical, “Laudato Si’, on Care for Our Common Home,” and to discuss the best ways to act in promoting “integral ecology.” At the beginning of the meeting, children from Nomadelfia, an international community in Grosseto, Italy, performed for participants.

The scientific community has developed increasingly accurate assessments in regard to the climate crisis, he said.

“The pace of consumption, waste and environmental change has so stretched the planet’s capacity that our contemporary lifestyle, unsustainable as it is, can only precipitate catastrophes, such as those which even now periodically occur in different areas of the world,” he said, adding that “there is a real danger that we will leave future generations only rubble, deserts and refuse.”

Humanity has the know-how and means to cooperate responsibly in safeguarding the earth, the pope said, and governments, individuals, financial institutions and religious leaders all have a responsibility and role to play.

He said the 24th Conference of the Parties to the U.N. Framework Convention on Climate Change, COP24, in Poland in December “could prove a milestone on the path set out by the 2015 Paris Agreement.”

“We all know that much still needs to be done to implement that agreement. All governments should strive to honor the commitments made in Paris, in order to avoid the worst consequences of the climate crisis,” he said.

Greenhouse gas reduction “requires honesty, courage and responsibility, above all on the part of those countries which are more powerful and pollute the most,” he said, and “we cannot afford to waste time.”

Financial institutions — which are part of the problem and, therefore, part of the solution — have to become an instrument used to create “more inclusive and sustainable development,” he said.

The pope highlighted the importance of showing particular concern and including young people and indigenous communities in environmental efforts.

“It grieves us to see the lands of indigenous peoples expropriated and their cultures trampled on by predatory schemes and by new forms of colonialism, fueled by the culture of waste and consumerism,” he said. For many indigenous cultures, land “is not a commodity but rather a gift from God and from their ancestors.”

“How much we can learn from them! The lives of indigenous peoples are a living memory of the mission that God has entrusted to us all: the protection of our common home,” he said.