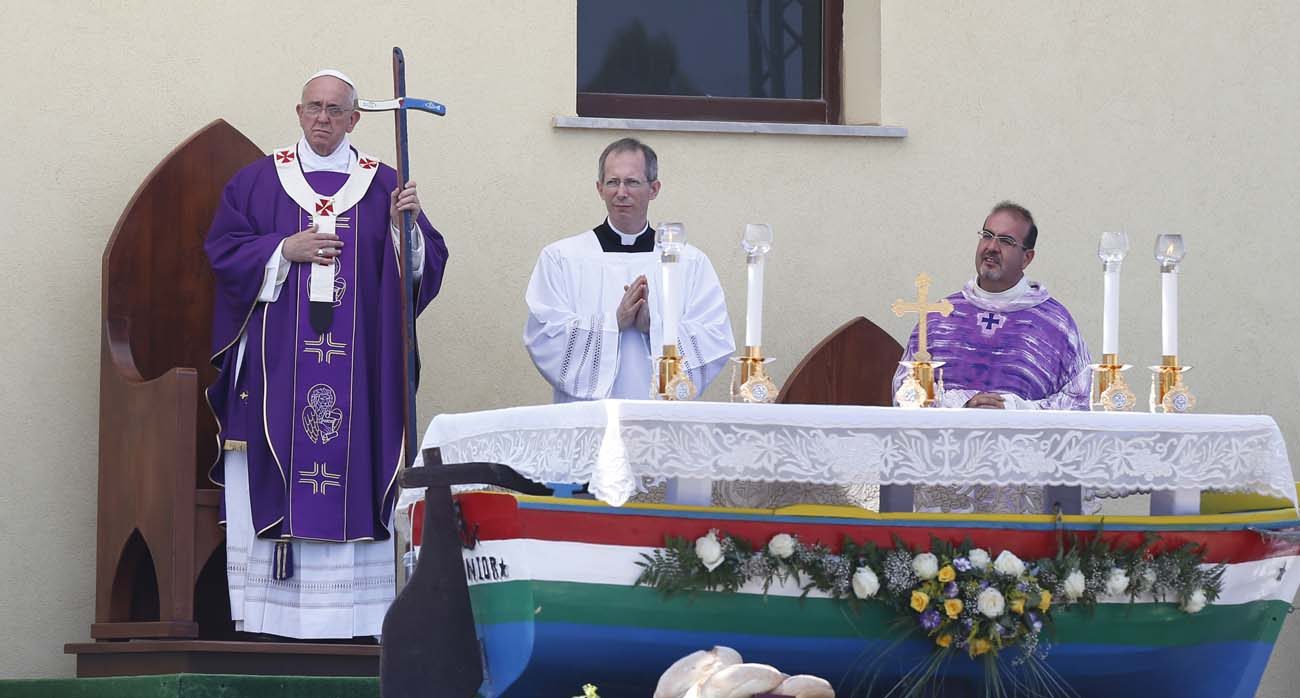 VATICAN CITY (CNS) — Hearts that are closed to welcoming migrants and refugees are similar to those of the Pharisees, who often would preach sacrifice and following God’s law without exercising mercy to those in need, Pope Francis said.

Jesus’ rebuke of the Pharisees’ “insidious murmuring” is “a finger pointed at the sterile hypocrisy of those who do not want to ‘dirty their hands,’ like the priest or the Levite in the parable of the good Samaritan,” the pope said in his homily July 6 during a Mass commemorating the fifth anniversary of his visit to the southern Mediterranean island of Lampedusa.

“This is a temptation powerfully present in our own day. It takes the form of closing our hearts to those who have the right — just as we do — to security and dignified living conditions. It builds walls, real or virtual, rather than bridges,” he said.

According to the Vatican, an estimated 200 migrants, refugees and rescue volunteers attended the Mass, which was celebrated at the altar of St. Peter’s Basilica. Pope Francis greeted each person present after the Mass ended.

In his homily, the pope recalled his visit to Lampedusa and repeated “that timeless appeal to human responsibility, ‘Where is your brother? His blood cries out to me.'”

Sadly, he said, “the response to this appeal, even if at times generous, has not been enough, and we continue to grieve thousands of deaths.”

The pope said that Jesus’ invitation to those “who labor” to find rest in him is a promise of freedom for all who are oppressed. However, “he needs us to fulfill his promise.”

“He needs our eyes to see the needs of our brothers and sisters. He needs our hands to offer them help. He needs our voice to protest the injustices committed thanks to the silence, often complicit, of so many,” he said.

Solidarity and mercy, the pope continued, are the only components of a reasonable response to the migration crisis that is “less concerned with calculations than with the need for an equitable distribution of responsibilities, an honest and sincere assessment of the alternatives and a prudent management.”

Speaking in Spanish to representatives of rescue teams stationed in the Mediterranean Sea, Pope Francis thanked them “for embodying in our day the parable of the good Samaritan, who stopped to save the life of the poor man beaten by bandits.”

He also encouraged those who have been rescued to be “witnesses of hope in a world increasingly concerned about the present, with little vision for the future and averse to sharing.”

“With respect for the culture and laws of the country that receives you, may you work out together the path of integration,” Pope Francis said.