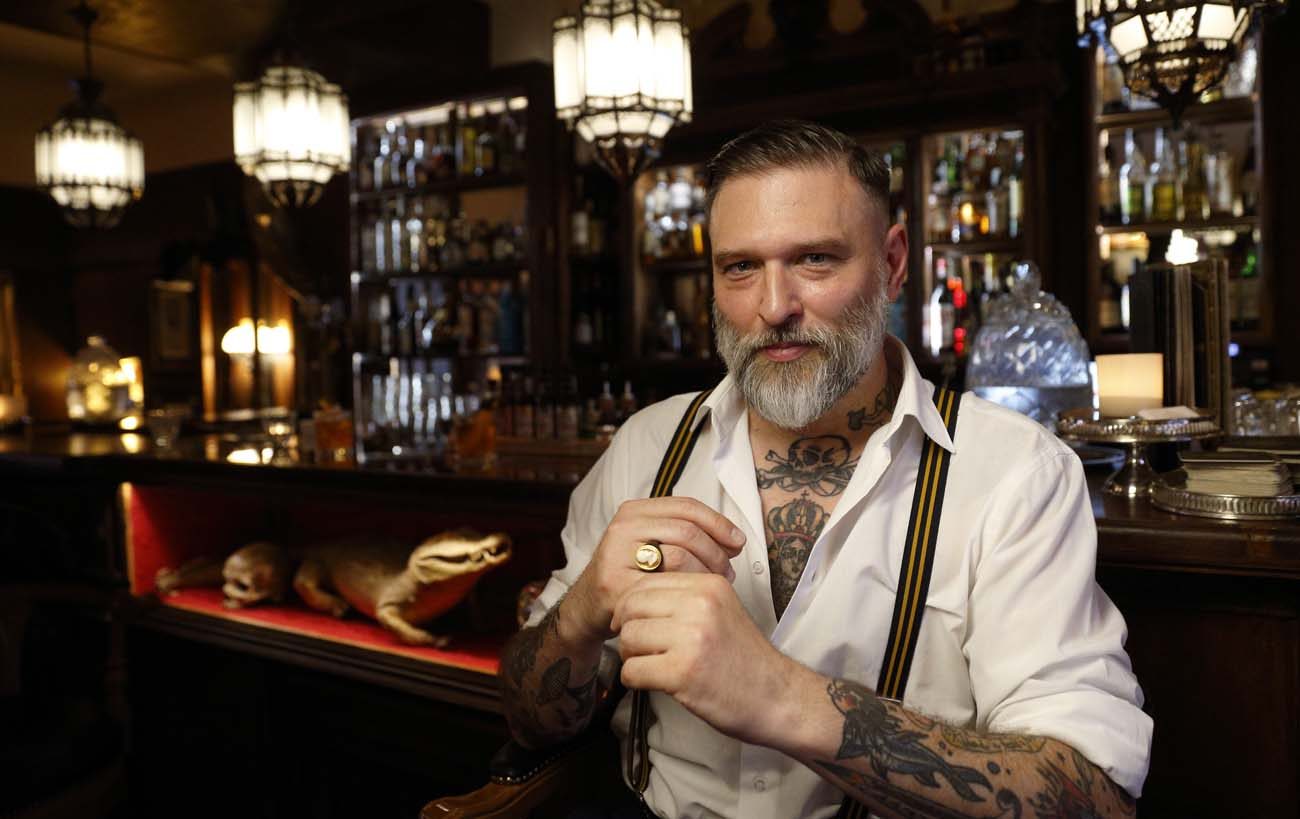 Fabrizio Ghilardi, managing director of the Wisdomless Club, poses at the club in Rome June 12. In a city where many restaurants and bars are being modernized, the new club offers a quiet atmosphere with 1930s decor and classical Christian art. (CNS photo/Paul Haring)

ROME (CNS) — While Rome always has been a city of beauty that highlights both the past and the present, a quaint and unusual bar nestled in the heart of the Eternal City has taken that concept to new heights.

Beauty, like faith, isn’t meant to be imposed but rather experienced firsthand and as “a gift from God,” Ghilardi said. “You can either accept it or reject it.”

“There are some religious people who make proselytism their weapon, but that is a sectarian technique. I think, instead, that entering a place like this and seeing and participating in what is beautiful is attractive,” he said.

Wisdomless Club opened in February with a simple, yet elegant aesthetic featuring wood paneling, vintage chesterfield sofas, art and religious objects. Its name, Ghilardi said, is meant to be light-hearted self-deprecation; while the members are serious about faith and about life, they are at a bar, after all.

Mounted on a decorative wooden frame draped in red are several silver ex-votos, the traditional gift to a shrine when a pilgrim’s prayers are fulfilled. Near the bar, patrons can admire an 18th-century engraving of St. Peter’s Basilica while the bartender skillfully prepares their cocktails.

The club’s ambiance is meant to be a reminder that “beauty is one of God’s attributes,” Ghilardi said.

“As far as I’m concerned, beauty helps me to maintain a high standard of life, dignity and professionalism. In beauty, I find my ease,” he told CNS.

The displayed art includes an original engraving of Pope Paul III, the 16th-century pontiff who recognized the Confraternity of the Holy Trinity of Pilgrims and Convalescents, a religious group of laymen founded by St. Philip Neri with the mission of being hospitable to pilgrims visiting Rome.

While deeply committed to his Catholic faith, Ghilardi insisted faith is a personal encounter with God that cannot be forced upon those who visit the club.

“As a place located in the heart of Rome and just two steps away from Chiesa Nuova, where St. Philip Neri is buried, I don’t think it would be easy to ignore the issue of faith and beauty in Rome,” he said. But “this isn’t a Catholic club; it is a place that is open to everyone.”

For Paventi, the welcoming and hospitable atmosphere he and the club’s co-owners try to create is evocative of St. Philip Neri’s call to “be of service in secret” without “wanting something in return.”

It also is reminiscent of a time when gentlemanly behavior wasn’t flashy or arrogant, he told CNS.

“What we want to do is show that you can be beautiful without showing off,” Paventi said. “It is very ancient. The true gentlemen back in the day had gestures that today have become very ostentatious.”

Wisdomless Club’s decor, artwork and tattoo parlor — yes, it includes a tattoo parlor — make it “a place of dialogue,” Paventi said, where customers can speak calmly with one another and escape the big city atmosphere that at times can be “too vulgar or a bit too metropolitan.”

Ghilardi, who sports an array of tattoos himself, told CNS that their tattoo artists also work “with a passion for beauty.”

“I don’t believe a Catholic person cannot be tattooed,” he said. “Instead, Catholics must think about loving God in a sincere, honest and profound way until they truly desire what God presents to them in their daily life.”

NEXT: After investigation, pope accepts resignation of Honduran bishop