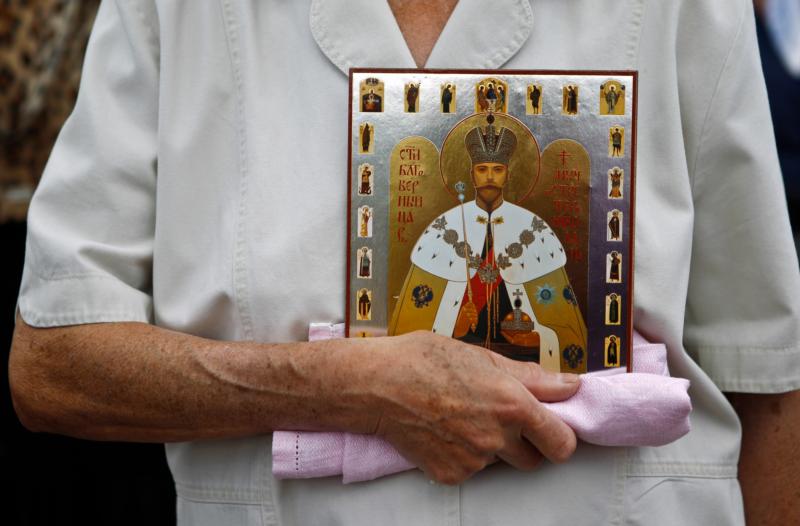 An Orthodox woman holds a portrait of Czar Nicholas II during a 2012 gathering in Moscow. The secretary-general of the Russian bishops’ conference urged Catholics to remember the 1918 murder of Nicholas II and his family with “penance and reflection,” while suggesting Catholics could participate in future commemorations. (CNS photo/Maxim Shemetov, Reuters)

OXFORD, England (CNS) — The secretary-general of the Russian bishops’ conference urged Catholics to remember the 1918 murder of Czar Nicholas II and his family with “penance and reflection,” while suggesting Catholics could participate in future commemorations.

“The killing of this family was one of the first steps on a path of mass murder, forced labor, religious persecution and genocide which led on through the Stalinist period,” said Msgr. Igor Kovalevsky, secretary-general.

“Although not officially engaged in these centenary events, the Catholic Church must do something — so the best is to reflect deeply, in a spirit of penance, on all those tragic times.”

The priest spoke after 100,000 people — led by Russian Orthodox Patriarch Kirill — attended a pilgrimage and religious observances in Yekaterinburg.

In a July 19 Catholic News Service interview, Msgr. Kovalevsky said the country’s million-strong Catholic Church had not been involved in past commemorations of the czar and his family, nor in their canonization by the Orthodox Church.

However, he added that Nicholas II’s murdered entourage had included at least one Catholic, the Latvian-born footman Alexei Yegorovich Trupp, and said he believed members of Yekaterinburg’s Catholic parish had taken part in the July 12-17 events.

“We should remember Nicholas II had voluntarily given up his throne the previous year, so it’s more historically accurate to mourn the killing of a family than the death of a czar,” Msgr. Kovalevsky said.

“We also follow quite different procedures when it comes to proclaiming saints, so the Orthodox Church’s approach to these matters is its own internal affair.”

Nicholas II, who abdicated in February 1917, was shot by Bolshevik captors in a basement while under house arrest at Yekaterinburg in the early hours of July 17, 1918. The empress and five children also were killed.

The victims, finished off with bayonets, were burned and doused with acid before being dumped in a pit at Ganina Yama, 14 miles from the city, where their presumed remains were exhumed in 1991.

All seven were later reinterred in St. Petersburg’s Sts. Peter and Paul Orthodox Cathedral and canonized as martyrs by the Russian Orthodox Church in August 2000.

An Orthodox church was dedicated in 2004 on the site of the Ipatiev House, where the killings took place.

PREVIOUS: Riverdance to perform for Pope Francis during World Meeting of Families

NEXT: Tradition with a twist: Rome club has ancient roots, modern flair