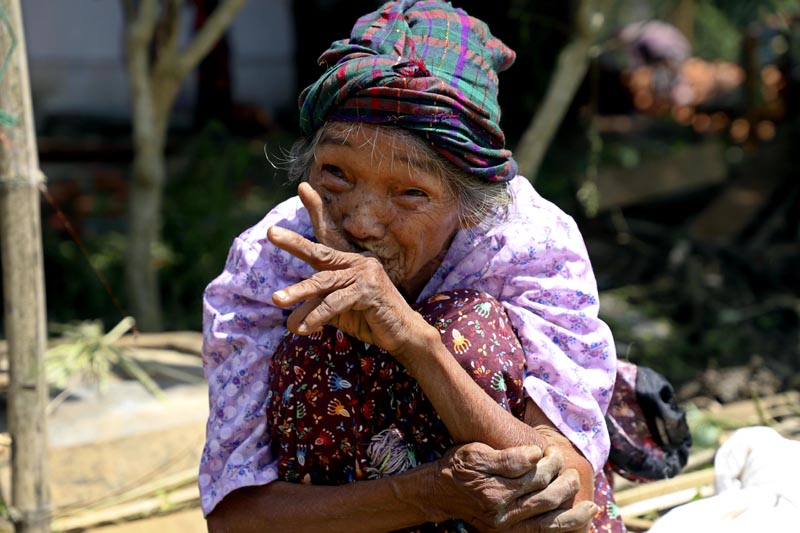 A displaced elderly Kachin woman sits outside a temporary camp May 11 on the grounds of a Catholic church in Myitkyina, Myanmar. (CNS photo/Seng Mai, EPA)

WASHINGTON (CNS) — The Tamadaw, the military of Myanmar, has been attacking the ethnic minority Kachin people in what some observers are calling a genocide.

Although much attention has been given to the ethnic Rohingya, “If you ask the Kachin if they believe a genocide is taking place, everyone will tell you yes,” said the Rev. Bob Roberts, senior pastor at Northwood Church in Dallas, who recently visited Myanmar.

In Kachin state, which is over 90 percent Baptist and about 5 percent Catholic, the Tamadaw has burned 406 villages and 311 churches and displaced more than 130,000 people in the past seven years.

“These are gut-wrenching acts,” said Nicolee Ambrose, spokeswoman for the Interfaith Coalition to Stop Genocide in Burma.

The motivation for the attacks is an ongoing conflict that started almost as soon as Burma, now Myanmar, gained its independence from Britain in 1948.

The government of Myanmar views the Kachin Independence Army, which Rev. Roberts described as “for the most part, a defensive organization,” as a terrorist group.

Despite this, the KIA, along with other ethnic armed groups, has been invited to a government-sponsored peace conference July 11-16.

Ambrose described a trip to a camp for internally displaced Kachin, where she met women and children who were victims of violence. Fifty-two percent of women who had survived attacks on villages had been raped, she said.

“It’s first an ethnic problem and second a religious problem,” said Rev. Roberts, although he said that religion did play a role in the attacks.

Since the vast majority of the Kachin are Christians, the Tamadaw goes out of its way to attack churches, said Sut Nau Ndayu, the president of the Kachin National Organization USA.

“Churches are the core of the community. When the military personnel come and destroy churches, they destroy the people’s hope and safety and shatter their mentality. That’s what they’re aiming for,” he said.

The Christians are easy targets because they tend to flee to churches, said Rev. Roberts.

“Every single church there is a refugee center, and the shelters they provide are basically bamboo with tarps,” Rev. Roberts said.

Ndayu also said the military is harassing camps for displaced people, using human shields and blocking all humanitarian aid to the camps.

Rev. Roberts said the Christians in Kachin expect the United States will do something for them.

He said that, while he was visiting Kachin, “One of the things that made me sad was that they would ask again and again, ‘Where are the American Christians?'”

The Kachin feel a special connection to American Christianity, he said, because the vast majority of them are Baptists, whose ancestors had been converted by Adoniram Judson, U.S. missionary to Burma in the early 1800s.

Ambrose said the lifting all sanctions on Myanmar in 2016 led to the Tamadaw increasing the number and ferocity of their attacks in Kachin.

“Ben Rhodes (a former deputy national security adviser for strategic communications) and Barack Obama thought the way to hasten the creation of democracy in Burma was to lift sanctions, but lifting sanctions took away Aung San Suu Kyi’s one stick she could use to control the military.”

Suu Kyi is the head of the civilian government of Myanmar, but the military has substantial power: It controls 25 percent of the seats in parliament and about 75 percent of the economy.

“We believe the lifting of American sanctions gave license to the military for genocidal campaigns and halted democratic reforms,” Ambrose said.

Ambrose, Rev. Roberts and Ndayu all called for the United States to place sanctions against Myanmar again.

Ndayu said the government of Myanmar has managed with some success to avoid censure.

“Do you ever hear the Aung San Suu Kyi government talk about accountability? No,” he said. “I strongly recommend that you not get fooled by what you hear. Burma’s officials are very smart in diverting public attention and putting up false information.”

The Tamadaw, he said, does the same thing.

“The army makes tons of promises on paper, but in reality, it is all too clear that the government implements none of them,” he said.

In Myanmar, ucanews.com reported Bishop Francis Daw Tang of Myitkyina, in Kachin state, has called for a halt to fighting in order to allow dialogue.

The bishop told ucanews.com that both sides need to compromise to reduce violence and implement provisions of the 1947 Panglong agreement regarding self-determination and minority rights.

Rev. Roberts said he would continue to stand in support of the Kachin.

“We are here today as American Christians, as American evangelicals, to publicly say to the government of Myanmar and to Kachin Christians: We have heard you, we are standing with you, we want something to be done, and you are not alone.”

PREVIOUS: Guidelines needed for use of deconsecrated churches, cardinal says

NEXT: Ethiopian cardinal praises his nation’s peace deal with Eritrea