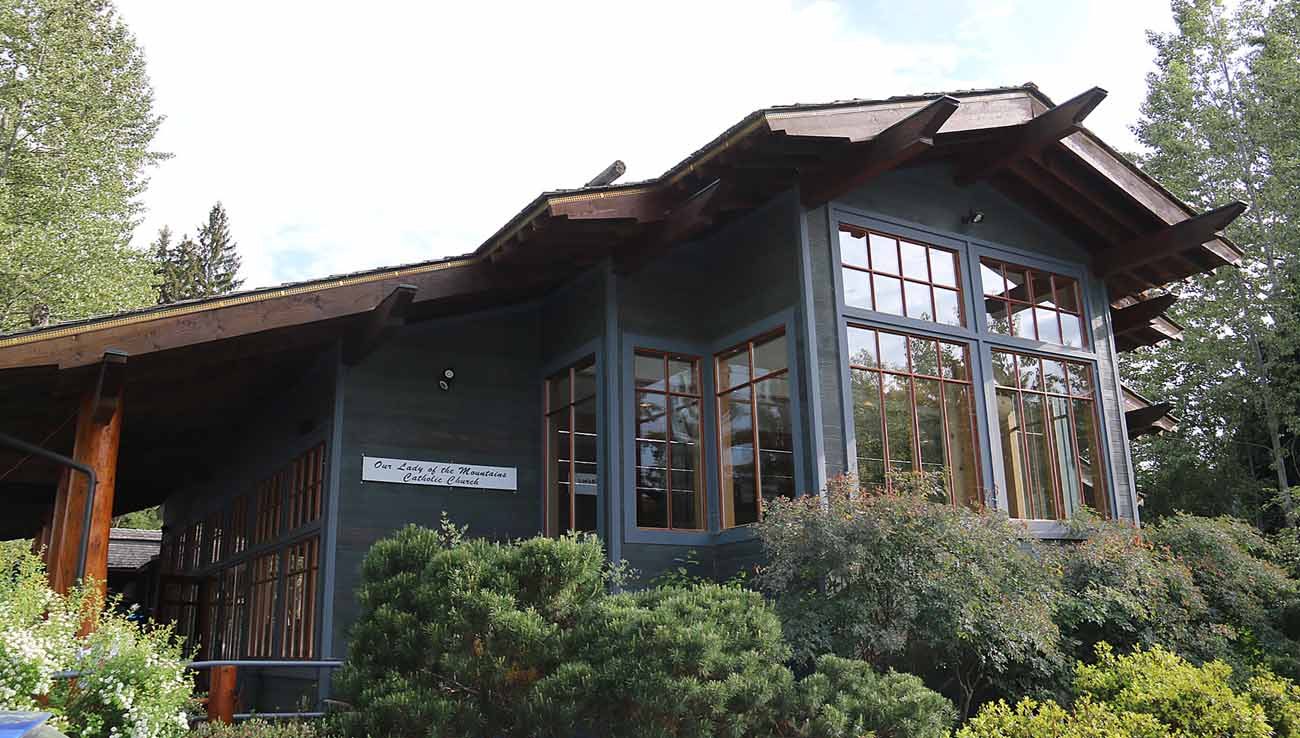 The exterior of Our Lady of the Mountains is seen June 2 in Whistler, British Columbia. The parish is one of British Columbia's most unusual churches, and 25 years ago it became the permanent place of worship for a vibrant community of Catholics. (CNS photo/Agnieszka Krawczynski, B.C. Catholic)

WHISTLER, British Columbia (CNS) — The season has shifted gears from skiing to hiking in Whistler. For a small community in the resort municipality, a season of celebration has also just begun.

Our Lady of the Mountains Parish has celebrated its 25th birthday.

Whistler is “a small community, some 10,000 souls, and yet it’s a host to the world — particularly as it is, I’ll admit, the greatest ski resort in the world,” Father Dale Normandeau said to cheering and applause at a banquet earlier this summer.

Our Lady of the Mountains — with visitors from across the globe, a church built like a wooden ski chalet, and Mass participation that ebbs and flows depending on the season — is one of British Columbia’s most unusual churches. And, 25 years ago, it became the permanent place of worship for a vibrant community of Catholics.

Oblate Father Bob Haggarty helped the community discern building a church when he was assigned to serve in Whistler in 1986. When he arrived, Our Lady of the Mountains Parish did not exist — it was a mission of St. Christopher’s Parish in Mount Currie. Local Catholics, with no church of their own, had been going to Mass in a 60-seat skier’s chapel at the base of Whistler Mountain.

Visitors “would come in with their skis and poles and be ready for Mass,” said Father Haggarty. “They hoped the priest wouldn’t speak too long, they would maybe put a little in the collection, and then go to their wealthy homes or go down to the bar and spend a lot of money there, but they’d been at Mass anyway.”

The tiny A-frame structure, built in 1968, was Canada’s first ecumenical chapel and was shared with people of other faiths.

But the Catholic population was growing and the chapel was becoming crowded. The faithful started using other shared spaces, like a local conference center or elementary school. Father Haggarty said for Easter, as many as 800 people would show up.

Traveling to Whistler for the day and staying in Mount Currie for the night, Father Haggarty started consultations with the people about their options for building their own church. Msgr. John MacIntyre took over in 1992 as the first resident priest, and one year later, Our Lady of the Mountains Parish was officially established.

Construction began, with the full support of Mayor Ted Nebbeling, in 1994.

Longtime parishioner Jeannette Callahan said “It was our hope, at that time, that Our Lady of the Mountains would become a place to gather, share our faith, worship, rest, learn, meet new friends, welcome newcomers, offer community rental space at reasonable rates, and ultimately, to share God’s love.”

It did that and then some. Since it was built, Our Lady of the Mountains Church has also played host for the Whistler food bank, and its rectory was once used as emergency housing. Sliding a temporary wall before the wooden altar and rearranging the chairs easily transforms the church into a banquet hall or rental space.

Msgr. Jerry Desmond, rector of St. John Vianney Parish in Kamloops, remembers helping the community and then-Bishop Lawrence Sabatini buy land for the new church. It took Msgr. Desmond one hour to fly a Cessna 210 from Pemberton to Whistler, and he made the trip countless times until he found the right property.

He remembers when about 30 people came out for a little prayer service to break the ground for the new church. “It was a lousy day. It was in the springtime, and it was rainy,” but he was “happy to be part of it.”

Our Lady of the Mountains is about 75 miles from downtown Vancouver but falls under the Diocese of Kamloops. Its pastor, Father Normandeau, also serves churches in Mount Currie and Pemberton.

The church community has grown to about 70 families, half of whom are Whistler locals. Many tourists and, depending on the season, skiers and hikers, still come by for Mass.

Bishop Joseph Phuong Nguyen of Kamloops made the 185-mile trip to celebrate the 25th anniversary and to offer the sacrament of confirmation in June.

“To all of you: I thank you so much for working hand in hand for building up our parish, Our Lady of the Mountains,” he told the crowd during the banquet.

“God knows the abilities of each of us, and he gives according to our ability to receive. So, as workers in his vineyard, we are reminded of the famous words of St. Catherine of Sienna: ‘If you are what you should be, you will set the world ablaze.'”

Krawczynski is a reporter for BC Catholic, based in Vancouver.

PREVIOUS: Vatican calls for prayers, support for seafarers, who face many risks