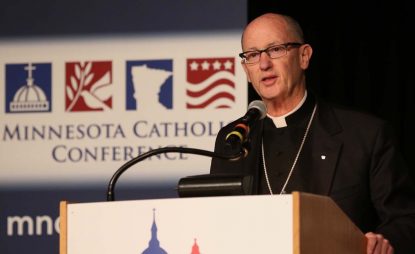 Bishop James D. Conley of Lincoln, Neb., is pictured in this March 9, 2017, photo at Catholics at the Capitol in St. Paul, Minn., sponsored by the Minnesota Catholic Conference. (CNS photo/Dave Hrbacek, The Catholic Spirit)

LINCOLN, Neb. (CNS) — The sex abuse allegations against Archbishop Theodore E. McCarrick and questions about whether “other church leaders knew about this abuse and could have intervened” to stop it “are painful,” Lincoln Bishop James D. Conley said Aug. 3.

“All of us who have heard them have had to grapple with the feelings they cause: with shame, with anger, with deep disappointment,” he said, writing in his column in the South Nebraska Register, the diocesan newspaper.

“Of course, the facts are not all yet clear; we don’t yet know the full truth. But justice demands that we seek the facts, and that those who have done wrong be held accountable,” he said.

“In the weeks and months to come, the church’s investigations may well turn up more information, and while that might lead to clarity and understanding, it might also lead to more painful and difficult moments,” he said.

He added, “Just this week in a blog post, a former priest of the Diocese of Lincoln, now laicized, leveled accusations against a deceased priest of the diocese.”

In a separate statement the diocese responded to those accusations made about the late Msgr. Leonard Kalin in an online article in The American Conservative written by Peter Mitchell, a former priest. He was ordained in 1999 and laicized in 2017. Before he died in 2008, Msgr. Kalin was the vocations director for the Lincoln Diocese for many years. Mitchell accused the priest of sexual improprieties and other misconduct, like gambling and heavy drinking.

“The Diocese of Lincoln is aware of past reports of conduct contrary to prudence and moral law by Msgr. Leonard Kalin, deceased in 2008,” the statement said. “The diocese addressed these allegations of misconduct directly with Msgr. Kalin during his time in priestly ministry. The diocese is not aware of any violations of civil law by Msgr. Kalin.”

It continued: “The Diocese of Lincoln endeavors to maintain a culture of holiness, chastity, integrity and Christ-like joy among our seminarians and priests. We are also committed to maintaining the high standards of chaste behavior to which the Lord calls us.

“We ask any priest, religious, seminarian, or lay Catholic with any information or concerns about past or current misconduct in a parish, school, or apostolate of the diocese to contact the diocesan chancery or, if criminal behavior is suspected, any law enforcement agency.”

In his column, Bishop Conley apologized “to anyone who has been harmed by the failures of the church’s own leaders to live according to the Gospel.”

“It is well known that sexual abuse and coercion are not unique to the Catholic Church,” he wrote. “Children are most often abused by those they know well, and regrettably, this often includes their own family members.

“We should also, at this difficult moment, pray for all Catholics who are angry, disappointed, or hurt. We should pray that Jesus, suffering alongside us, will reveal himself,” he added. “And that he will show us the path to renewal, resurrection, and new life.”

“We should pray, especially, dear brothers and sisters, for the gift of chastity. We should pray that the Lord will give us a renewal of chastity, and that all who have been harmed by sins against chastity will be healed.”

“Human sexuality is one of most beautiful gifts that the Lord has given us” and “concerns the innermost being of the human person,” Bishop Conley said.

“But sexuality ‘is realized in a truly human way only if it is an integral part of the love by which a man and woman commit themselves totally to one another until death,” he said. “And all people are called to chastity, which the catechism calls ‘a school of the gift of the person,’ which ‘leads him who practices it to become a witness to his neighbor of God’s fidelity and loving kindness.'”

“The catechism puts it plainly: ‘Either man governs his passions and finds peace, or he lets himself be dominated by them and becomes unhappy.'”

Bishop Conley opened the column by saying that in recent weeks, as news of the allegations against Archbishop McCarrick spread, he was reflecting on something St. John Paul II said when he visited the United States in 1995:

“And on the far side of every cross we find the newness of life in the Holy Spirit, that new life which will reach its fulfillment in the resurrection. This is our faith. This is our witness before the world.”

NEXT: Massgoers pray for shrine rector, all other passengers who survived crash