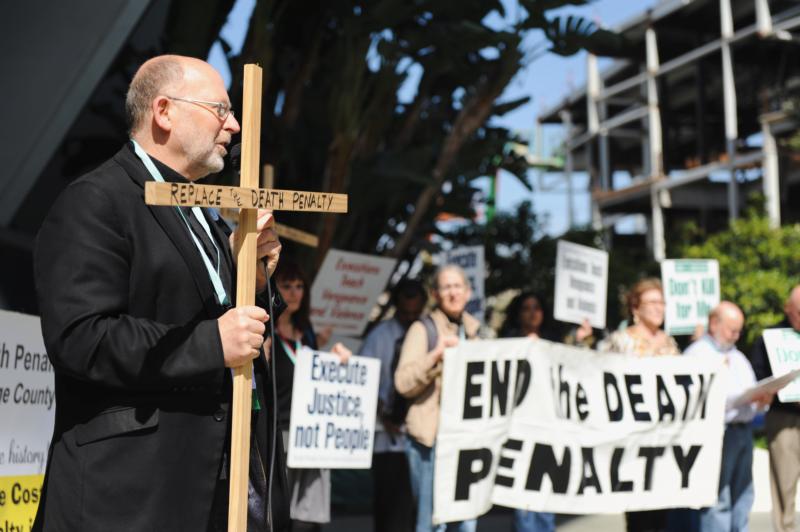 Father Chris Ponnet, chaplain at the St. Camillus Center for Spiritual Care in Los Angeles, speaks during a rally protesting the death penalty in Anaheim, Calif., Feb. 25, 2017. Pope Francis has ordered a revision to the catechism to state that the death penalty is inadmissible and he committed the church to its abolition. (CNS photo/Andrew Cullen, Reuters)

UPDATED – WASHINGTON (CNS) — Joining other Catholic death penalty opponents, the chairman of the U.S. bishops’ domestic policy committee praised the Aug. 2 announcement that Pope Francis had ordered a revision of the Catechism of the Catholic Church calling the death penalty “inadmissible.”

In an Aug. 3 statement, he stressed: “All human beings are created in the image and likeness of God and the dignity bestowed on them by the Creator cannot be extinguished, even by grave sin, such that all persons, from conception until natural death possess inalienable dignity and value that points to their origin as sons and daughters of God.”

He said the USCCB has called for an end to the death penalty in the U.S. for decades.

“I am overjoyed and deeply grateful to learn that Pope Francis closed the last remaining loophole in Catholic social teaching on the death penalty,” said Sister Helen Prejean, a Sister of St. Joseph of Medaille, who is a longtime opponent of capital punishment.

These leaders, in separate statements, stressed the clarity of the pope’s announcement. Sister Prejean said the Catholic Church “has opposed capital punishment for many years, but the official language used to talk about the issue up to this point has always been equivocal” leaving room for some to say that “executions are morally permissible.”

The catechism’s “new language is very clear,” Sister Prejean said, with its description of the death penalty as “an attack on the inviolability and dignity of the person.” There are “absolutely no exceptions,” she added.

Church leaders pointed out that the Pope Francis’ action builds on work begun by St. John Paul II, who spoke of the dignity of guilty and innocent life and described executions as cruel and unnecessary.

Bishop DeWane said the catechism revision is consistent with statements of Pope Francis’ teaching on the death penalty, including his 2015 address to the U.S. Congress, as well as the statements of his predecessors. He said that Pope Benedict XVI urged “the attention of society’s leaders to the need to make every effort to eliminate the death penalty,” and St. John Paul II said: “Not even a murderer loses his personal dignity, and God himself pledges to guarantee this.”

“The moral ground zero of this issue in the Catholic context has been the question of self-defense and the inviolable dignity of every human being,” said Sister Prejean, who pointed out that there is “nothing dignified about rendering a person defenseless, strapping them down to a gurney and killing them.”

“The moral tectonic plates have shifted,” she added, saying the “very nature of the act of executing a person can no longer be justified.”

But as thrilled as she was by the pope’s announcement, the author of “Dead Man Walking” — about her experience helping a death-row inmate — also said the revision is “still just words on a page. Words must be followed by action. It’s time to abolish state-sponsored killing forever.”

Vaillancourt Murphy similarly stressed the reality of the death penalty in the United States, saying 31 states “still have it on the books.”

She also said more than 2,800 people are currently on death row in the United States and 14 executions are scheduled for the remainder of 2018, including three in August.

“These upcoming executions are a stark reminder that the death penalty is active in the United States, and it violates our commitment to the dignity of all life,” she said. “The death penalty is a failed practice that perpetuates the cycle of violence and disproportionately targets marginalized populations, especially people of color, those living in poverty and people suffering with mental illness.”

Hannah Cox, national manager of Conservatives Concerned About the Death Penalty, also issued a statement in support of the pope’s revision.

“(It) reflects what we are seeing in our work with conservative Catholics who increasingly understand the death penalty is a failed and unnecessary policy that does not value life and does nothing to make our society safer,” she said. “We are grateful for the leadership of the Catholic Church, including Popes John Paul II, Benedict XVI, and Francis, in efforts to end the death penalty.”

“We join Pope Francis in calling for the ‘elimination of the death penalty where it is still in effect,’ since it is not necessary to protect public safety from an unjust aggressor,” they wrote.

The bishops said they have publicly expressed in recent years that the “death penalty is no longer needed or morally justified in Nebraska.”

“Please join us in prayer for victims of serious crime, for those currently on death row and for the elimination of the death penalty in Nebraska,” they added.

NEXT: University, institute to be hub for causes of African-American Catholics